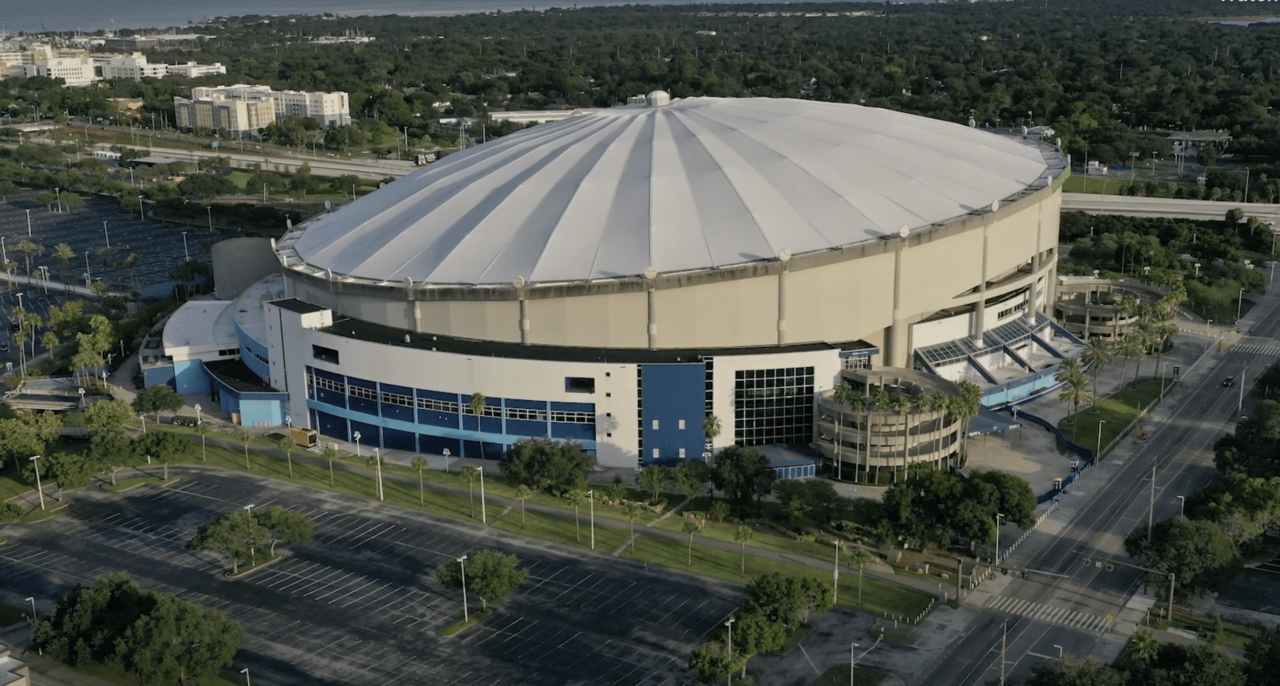 The city of St. Petersburg released seven proposals to redevelop the Tropicana Field site that include plans both with and without a baseball stadium.

The plans, made public late Tuesday afternoon, highlight green space around Brooker Creek and include affordable housing options as the city expands.

The announcement came amid news Kriseman rejected the latest proposal from the Tampa Bay Rays for a new stadium on the Tropicana Field site.

The city is providing a comment section on the webpage so that residents can give feedback on each of the development proposals.

Once Kriseman and his staff review all the comments that have come in through the web page, his administration will create a shortlist of the proposals, and from there, the city will go through another process of narrowing contenders.

The city will cross-examine the proposals with 26 professionals, looking at the development from aspects of sustainability, health, public policy, economic development, job creation and equity, particularly for the African American community that was displaced with the existing Trop site was developed.

Here’s a rundown of what each has to offer:

Midtown Development is a Florida company that proposes the site as a mixed-use neighborhood at a pedestrian scale, called “Creekside.”

It seeks to fill the site with office, retail, hospitality, civic and residential space with “immediate emphasis on breaking down physical and metaphysical barriers that have unjustly deprived the African American community and heritage of St. Petersburg,” according to the proposal.

The Creekside proposal includes more than 10,000 housing units, 1,000 of which are designated low and moderate income, green-certified residential units.

The plan also includes the Heritage Trail, to celebrate and honor the history of the site, as well as a central park by the creek, which would also have a water pavilion walk-way.

The plan also highlights a piazza as a pedestrian-only space filled with greenery and benches, as well as a boardwalk area.

The east-end of the site would have commercial development, an innovation campus and a hotel and conference center. The middle of the site with Booker Creek would be the citywide destination and entertainment center. The west would act as a neighborhood.

The Pinellas County Urban League is a part of the development team.

The developers with this group have completed several developments in St. Petersburg already, including ONE St. Pete — a 253-unit, 41-story luxury high-rise residential building in downtown.

The proposal outlines housing targeted toward a variety of family sizes and income levels, including affordable housing, as well as a 400-key hotel with 50,000 square feet of meeting space. As far as residential space, the proposal estimates 3,900 units.

A tech-focused research campus is envisioned for occupation by a larger educational or health care institutional user to help drive innovation and catalyze local research and development activities.

The site would also create a cultural and amphitheater space envisioned to be occupied by museums, arts organizations or other creative users.

This proposal, without the ball park, would cost $2.6 billion.

This proposal will feature several mixed use spaces, as well as a tech campus, baseball museum and open-air amphitheater.

In terms of housing, the plan includes 50% affordable and 50% market rate multifamily apartments — consisting of roughly 2.3 million square-feet of apartments, or about 2,100 units.

The proposal includes up to 470,000 square-feet of retail space.

The plan includes up to 675,300 square-feet of office space to be used for the expansion of thriving local businesses in the marine and life sciences, financial services, data analytics, specialized manufacturing, and creative arts and design fields.

This plan is estimated to cost $2.67 billion.

This group of developers completed the St. Pete Pier Approach.

The proposal set a goal of developing 35% to 40% of total residential units on site as affordable housing, and an additional 10% to 15% of units as workforce housing. It would also designate a portion of the available units for local artists to provide an “Artist-in-Residence” program.

The developers also plan to partner with Three Daughters Brewing and the Florida Brewers Guild to develop a mentorship program to support, educate, and empower a local entrepreneur to become one of Florida’s first minority-owned breweries.

Their plan includes a 650,000-square-foot convention center and an associated 500 room hotel.

It also features a 500,000-square-foot technology campus to provide office, research, and creative space for the facility.

It would also include a new park around Booker Creek, which would “be enhanced with public gathering spaces and passive and active features.” The site would include a “History Walk” to honor the history of the site.

This plan would cost $3 billion.

This proposal promises that small businesses will make up at least 50% of its retail space.

It plans to create a public recreation space around Brooker Creek.

The development would also include a minimum of 50,000 square feet of conference space attached to a major flagship hotel and include a space for higher education.

This plan would include a community cultural center on the bottom floor of the East hotel, with a purpose to educate the community about the history and culture of the city.

The total cost to the city is estimated at $475 million. Broader costs were not included in the proposal.

The Unicorp plan would create “Petersburg Park,” which would be filled with outdoor and green space.

The developers noted that they would provide three months rent-free occupancy to any small business that relocates to Petersburg Park or a new business that chooses to move there.

The proposal would create about 3,450 units, distributed in a variety of housing types such as residential uses above retail and commercial space, live and workspaces. About 900 units would be dedicated to affordable housing.

The developers involved in this proposal have worked with St. Petersburg for nearly 15 years.

The proposal projects that 1,286 units, about 58% of the plan’s total residential units, would account for affordable and workforce/multifamily housing.

The residences would be integrated throughout the site, with six dedicated affordable housing parcels occupying the west side and several more mixed-income towers adjacent or to the east.

The estimated construction cost is $2.42 billion.

nextLast Call for 1.26.21 — A prime-time read of what’s going down in Florida politics