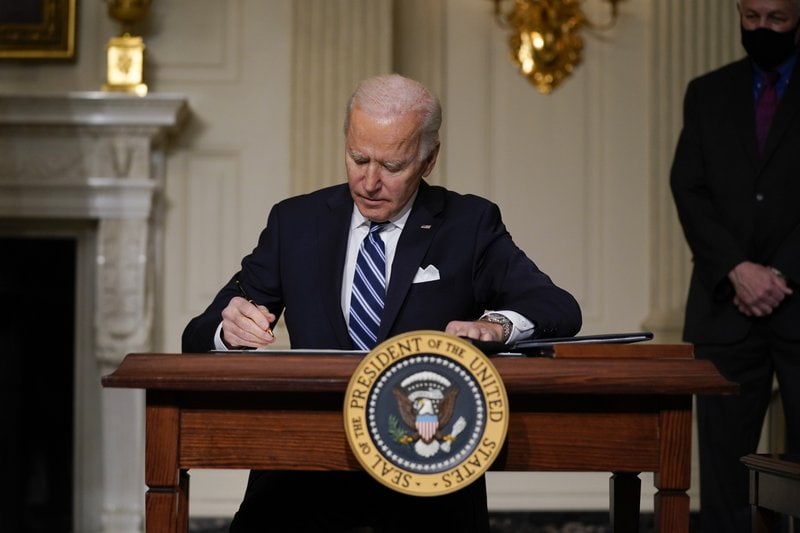 Biden wants to eliminate fossil fuel pollution in the power sector by 2035 and from the U.S. economy overall by 2050.

In the most ambitious U.S. effort to stave off the worst of climate change, President Joe Biden signed executive orders Wednesday to transform the nation’s heavily fossil-fuel powered economy into a clean-burning one, pausing oil and gas leasing on federal land and targeting subsidies for those industries.

The directives aim to conserve 30 percent of the country’s lands and waters in the next 10 years, double the nation’s offshore wind energy, and move to an all-electric federal vehicle fleet, among other changes. Biden’s sweeping plan is aimed at staving off the worst of global warming caused by burning fossil fuels.

But his effort it also carries political risk for the president and Democrats as oil- and coal-producing states face job losses from moves to sharply increase U.S. reliance on clean energy such as wind and solar power.

“We can’t wait any longer″ to address the climate crisis, Biden said at the White House. ”We see with our own eyes. We know it in our bones. It is time to act.″

He said his orders will “supercharge our administration’s ambitious plan to confront the existential threat of climate change.”

Biden has set a goal of eliminating pollution from fossil fuel in the power sector by 2035 and from the U.S. economy overall by 2050, speeding what is already a market-driven growth of solar and wind energy and lessening the country’s dependence on oil and gas. The aggressive plan is aimed at slowing human-caused global warming that is magnifying extreme weather events such as deadly wildfires in the West and drenching rains and hurricanes in the East.

Biden acknowledged the political risk, repeatedly stating that his approach would create jobs in the renewable energy and automotive sectors to offset any losses in oil, coal or natural gas.

“When I think of climate change and the answers to it, I think of jobs,″ Biden said. “We’re going to put people to work. We’re not going to lose jobs. These aren’t pie-in-the-sky dreams. These are concrete actionable solutions. And we know how to do this.″

In a change from previous administrations of both parties, Biden also is directing agencies to focus help and investment on the low-income and minority communities that live closest to polluting refineries and other hazards, and the oil- and coal-patch towns that face job losses as the U.S. moves to sharply increase its reliance on wind, solar and other other energy sources that do not emit climate-warming greenhouse gases.

Even so, Republicans immediately criticized the plan as a job killer.

Biden also is elevating the warming climate to a national security priority, directing intelligence agencies, the military and others to do more to prepare for the heightened risks. The conservation plan would set aside millions of acres for recreation, wildlife and climate efforts by 2030 as part of Biden’s campaign pledge for a $2 trillion program to slow global warming.

President Donald Trump, who ridiculed the science of climate change, withdrew the U.S. from the Paris global climate accord, opened more public lands to coal, gas and oil production and weakened regulation on fossil fuel emissions. Experts say these emissions are heating the Earth’s climate dangerously and worsening floods, droughts and other natural disasters.

Currently, 61% of the nation’s electric power comes from natural gas and coal, 20% from nuclear and 17% from wind, solar and other renewable energy, the U.S. Energy Information Administration says.

Georgia Tech climate scientist Kim Cobb said that “if this Day 7 momentum is representative of this administration’s 4-year term, there is every reason to believe that we might achieve carbon neutrality sooner than 2050,” even as key roadblocks lie ahead.

Biden’s actions came as his nominee for energy secretary, former Michigan Gov. Jennifer Granholm, faced deep skepticism from Republicans as she tried to pitch the president’s vision for a green economy.

“The last Democratic administration went on a regulatory rampage to slow or stop energy production,” said Wyoming Sen. John Barrasso, a leading Republican on the Senate Energy and Natural Resources Committee. “I’m not going to sit idly by… if the Biden administration enforces policies that threaten Wyoming’s economy.″

Granholm, the leader of a state devastated by the 2008 recession, promoted emerging clean energy technologies, such as battery manufacturing, as an answer for jobs that will be lost as the U.S. transitions away from fossil fuels.

Granholm and other officials said the investment in cleaner energy national will net millions of jobs. But that probably will take years to happen, and the orders will face intense opposition from oil and gas and power plant industries, as well as from many Republican — and possibly Democratic — lawmakers.

“The environmental left is leading the agenda at the White House when it comes to energy and environment issues,″ said Kathleen Sgamma, president of the Western Energy Alliance, which represents oil and gas drillers in Western states. The group filed a legal challenge soon after Biden signed the orders.

Biden’s directive to double energy production from offshore wind comes after the Trump administration slowed permit review of some giant offshore wind turbine projects. Significantly, he is directing agencies to eliminate spending that acts as subsidies for fossil fuel industries.

“The fossil fuel industry has inflicted tremendous damage on the planet. The administration’s review, if done correctly, will show that filthy fracking and drilling must end for good, everywhere,″ said Kierán Suckling, executive director at the Center for Biological Diversity, an environmental group that has pushed for the drilling pause.

The pause in onshore leasing is limited to federal lands and does not affect drilling on private lands, which is largely regulated by states. It also will not affect existing leases and could be further blunted by companies that stockpiled enough drilling permits in Trump’s final months to allow them to keep pumping oil and gas for years.

The order exempts tribal lands, mainly in the West, that are used for energy production.

Biden also will direct all U.S. agencies to use science and evidence-based decision-making in federal rule-making and announce a U.S.-hosted climate leaders summit on Earth Day, April 22.

previousSome Black communities in Florida have no vaccine access

nextJoe Henderson: When the Super Bowl begins in Tampa, drink a toast to Tom McEwen