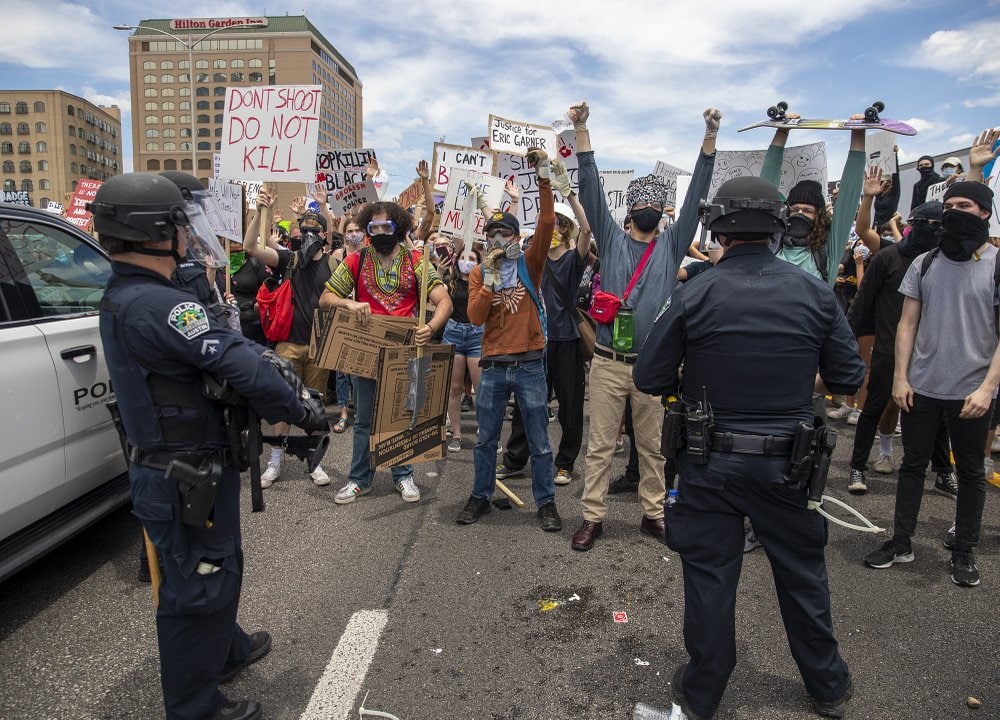 HB 1 critics chanted as they exited the committee room.

A House panel advanced legislation Wednesday that seeks to stiffen penalties against violent protesters and rioters.

The bill’s passage was not without sparks. The nearly two and a half-hour meeting grew tense at times, prompting uniformed law enforcement to stand outside the doors.

Public speakers used profanity and described the bill sponsor as racist. Some were escorted out; many chanted as they exited the committee room.

“If one need evidence of the decline of civil discourse in this country and State of Florida, one need look no further than the public presentations in this committee today,” Roach said.

HB 1, among other pursuits, aims to enhance legal penalties against rioters, vandals and looters.

It would elevate consequences for battery, assault, or inciting a riot.

It would also require a person arrested for unlawful assembly to remain in custody until their first appearance.

“There is a fine line between the First Amendment and violence,” Barquin-Fernandez told members.

The legislation would create a new “mob intimidation” offense.

Mob intimidation would apply when three or more people act “with a common intent, to compel or induce, or attempt to compel or induce, another person by force, or threat of force, to do any act or to assume or abandon a particular viewpoint,” according to the bill language.

Barquin frequently referenced his notes while fielding questions about the complex legislation.

The bill would also enhance penalties for defacing public monuments. Vandals would be required to cover repair or replacement costs.

Gov. Ron DeSantis unveiled his vision for the legislation over the summer amid a spree of riots and protests spurred by fatal police interactions.

The summer protests birthed the “defund the police” movement, a controversial social push to shift money from police departments to other social services.

The bill would allow citizens to challenge reductions to local law-enforcement budgets and give the governor and Cabinet the authority to overturn spending reductions.

The measure also seeks to enhance punishments for blocking or obstructing a vehicle during an unlawful assembly. On the other hand, it would clear drivers who unintentionally injure or kill others while evading mobs.

Republican leadership vowed to fast track the bill after rioters breached the U.S. Capitol on Jan. 6. Several died in the siege.

HB 1 faces strong opposition from Democrats and progressives. The subcommittee heard from over 69 speakers, many of whom decried the legislation.

“I was recently asked: How can we make us feel better?” Greico said. “You can shred it.”

Other attendees and lawmakers fear the bill will disproportionately impact people of color.

“I believe that this law would disproportionately hurt communities of color trying to exercise their constitutional rights,” Democratic Rep. Dianne Hart said. “This gives bad actors in law enforcement and the criminal justice system additional weapons to harm and kill black and brown Floridians.”

After the meeting, House Speaker Chris Sprowls noted the meeting’s tensions in a written statement.

“Today at the House Criminal Justice & Public Safety Subcommittee, we witnessed passionate, vocal speech and debate in support of and in opposition to HB 1,” Sprowls wrote. “It was a demonstration of how people can use the God-given right to freedom of speech and protest without being violent, without inciting riot and without destruction to property – the exact protection of actions opponents argue it would destroy.”

Agriculture Commissioner Nikki Fried, meanwhile, described the measure as an “assault on freedom.”

“Let’s call this what it is: Gov. Ron DeSantis wants to silence the voices of Floridians who are peacefully protesting systematic police brutality and asking that their lives be valued the same as other Americans,” Fried said. “Violence is already illegal – this is an assault on freedom.”

Other voicing oppositions to the measure include the American Civil Liberties Union of Florida and the Florida Campaign for Criminal Justice.