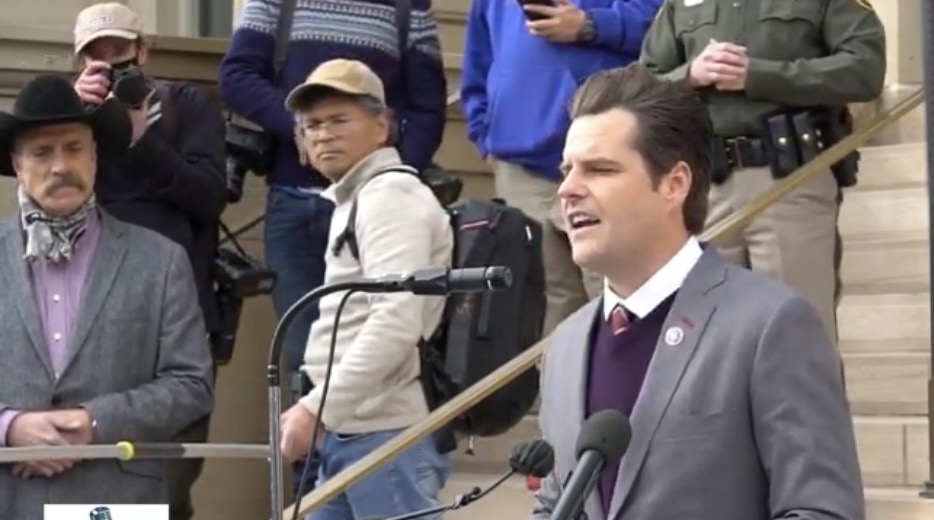 What about Democrats' 'Russia hoax', the Congressman wondered?

U.S. Rep. Matt Gaetz defended a controversial Congresswoman from Georgia for remarks she made before she was elected, positing an equivalence between her comments and criticisms of former President Donald Trump by House Democrats.

The Congressman made the remarks on the Fox News Channel Wednesday on the Hannity program.

Gaetz offered an unabashed defense of U.S. Rep. Marjorie Taylor Greene, who expressed conspiracy theories including questioning the facts of the Parkland massacre of 2016. Greene promoted lies that the Parkland and Sandy Hook shootings were staged, “false flag” events.

The U.S. House will vote on a resolution by U.S. Rep. Debbie Wasserman Schultz Thursday to remove Greene from committees. He also said that if Democrats remove her from committees tomorrow, Republicans should exercise the same prerogative when they take back the majority.

The Congressman said that while Greene said some wacky things, they were before she was elected … unlike Democrats who Gaetz contends trafficked in comparable conspiracies.

Greene got 75% of the vote, Gaetz added, underscoring the “dangerous precedent” of Congress stripping a duly elected member of the prerogatives of election.

“That’s what the left is trying to do. They’re saying the people of America don’t matter,” Gaetz said, saying that, along with the Republican caucus decision to retain U.S. Rep. Liz Cheney of Wyoming in leadership, was a sign of the “power of Washington,” something endemic to both the Republican and Democratic parties.

The Congressman also vowed that the consequences visited on Greene would establish precedent.

“When we get the majority back,” the Panhandle Republican thundered, “we’d better apply the same standard. So often, I see the Democrats actually fight to win, and Republicans are playing some patty cake game.”

The “hypocrisy and double standard,” Gaetz added, is “eating away at our voters and our country.”