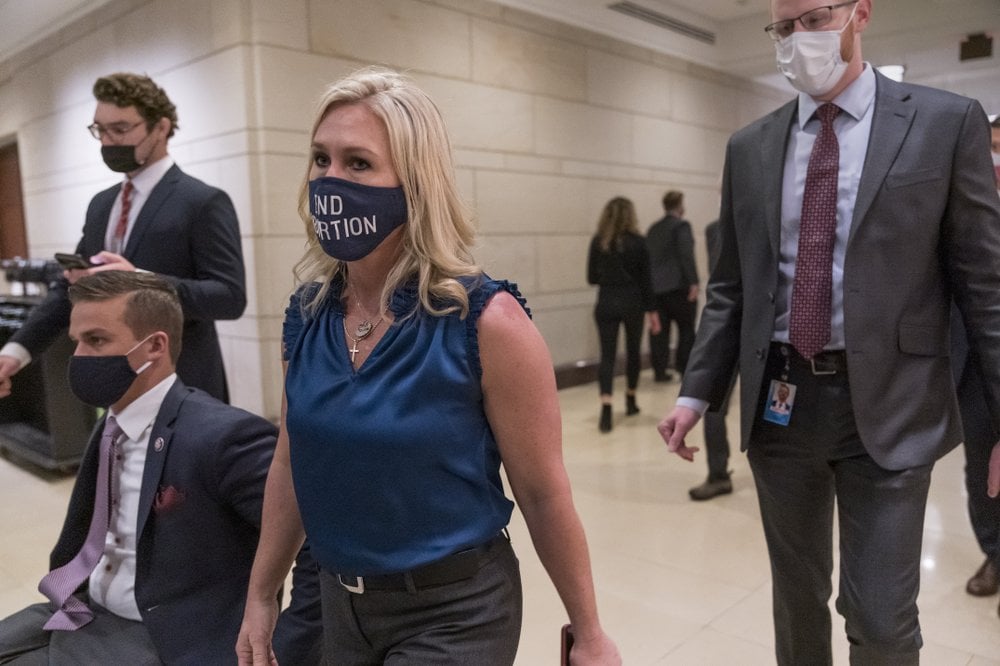 Efforts to depose Liz Cheney from leadership failed. What happens to the freshman Congresswoman?

House Republicans will be forced to go on the record, defending or rebuking Rep. Marjorie Taylor Greene, who has drawn bipartisan condemnation over her embrace of far-right conspiracy theories, as well as her past endorsement of violence against Democrats.

The politically agonizing vote expected Thursday, which will determine whether the Georgia Republican is stripped of her committee assignments, underscores tension over the best political path forward that has riven the party since Donald Trump lost the White House.

Democrats issued an ultimatum earlier in the week, telling House Republicans to strip Greene of her committee assignments — or they would. Bipartisan pressure built after Senate Minority Leader Mitch McConnell called Greene’s “loony lies” a “cancer” for the party.

But House Minority Leader Kevin McCarthy, a California Republican, on Wednesday ruled out taking action. Instead, he accused Democrats of a “partisan power grab” for targeting Greene, who once suggested that a Jewish-owned financial firm may have been involved in a plot to spark California wildfires using a space laser.

“If this is not the bottom, I don’t know what the hell is,” House Rules Committee Chairman Jim McGovern, a Massachusetts Democrat, said before a resolution was sent to the House floor to strip Greene of her posts.

McCarthy’s decision to back Greene comes at a time when the party has been ideologically adrift after Trump’s loss, struggling over whether to embrace his norm-busting divisiveness or the GOP’s more traditional, policy-oriented conservative values.

On Wednesday, House Republicans blocked an effort by conservative hardliners to oust the No. 3 House Republican, Rep. Liz Cheney, a Wyoming Republican, from her leadership role. Cheney, a daughter of former Vice President Dick Cheney, had enraged Trump supporters by voting to impeach him over the riot at the U.S. Capitol.

In sticking by both women, McCarthy was attempting to placate both traditional conservatives and populists, like Greene, who emulate Trump. The moves were typical of McCarthy’s preference to avoid ruffling feathers as he charts his path to someday becoming House speaker.

“You know what that’s going to mean?” he told reporters Wednesday evening. “Two years from now, we’re going to win the majority. That’s because this conference is more united. We’ve got the right leadership team behind it.”

But the GOP’s wings remain concerned that the other is leading them down the wrong path, and to some, Wednesday’s outcome seemed more an uneasy truce than a full-on peace treaty.

“This is about the direction of our party and whether or not we’re going to be a majority who’s dedicated to just one person or we’re going to be a united Republican majority,” said Rep. Jaime Herrera-Beutler, a Washington Republican, who with Cheney was among just 10 House Republicans to back impeaching Trump.

Greene has shown support for calls to violence against Democrats, bizarre fictions about faked school shootings, including saying the Parkland shooting at Marjory Stoneman Douglas High was planned, and unfounded QAnon theories about Democrats joining in child abuse rings.

The conspiracy theories she’s embraced came up during a closed-door Republican caucus meeting on Wednesday, which attendants described as spirited with long lines of speakers at the microphones. Some said Greene apologized to her colleagues, though there were conflicting, vague versions of exactly what she’d said.

“She was contrite. And I think she brought a lot of people over to her side,” said conservative Rep. Thomas Massie, a Kentucky Republican.

That’s at odds with statements she’s made in recent weeks on Twitter, where she has vowed to never back down or apologize and labeled her critics traitors, while using the Democratic push to punish her to raise money for her campaign.

Democrats say it’s politically advantageous to tie some Republicans to the far-right Greene. This week, the Democratic Congressional Campaign Committee launched a $500,000 ad campaign that attempts to link eight Republicans to her and other adherents of QAnon, which focuses on the false belief that top Democrats are involved in child sex trafficking and cannibalism.

McCarthy condemned Greene’s past endorsements of conspiracy theories — after weeks of saying little critical of her — and said the first-term congresswoman had recognized in a private conversation that she must meet “a higher standard” as a lawmaker.

“I hold her to her word, as well as her actions going forward,” McCarthy said.

She burst onto the national political scene with enthusiastic support from Trump.

Republicans appointed Greene to the Education and Labor Committee, a decision that drew especially harsh criticism because of her suggestions that mass school shootings in Connecticut and Florida could be hoaxes. Greene is also on the Budget Committee.

McCarthy said Democrats turned down his offer to move Greene onto the House Small Business Committee instead.

It’s unusual for party leaders to strip lawmakers of committee assignments, which can help them address their districts’ needs and raise campaign contributions.

In 2019, House GOP leaders removed Rep. Steve King, an Iowa Republican, who had a history of racist comments, from the Agriculture and Judiciary panels after he wondered aloud in a New York Times story about when the term “white supremacist” became offensive. He lost the Republican primary for his seat in 2020 and is out of Congress after serving nine terms.