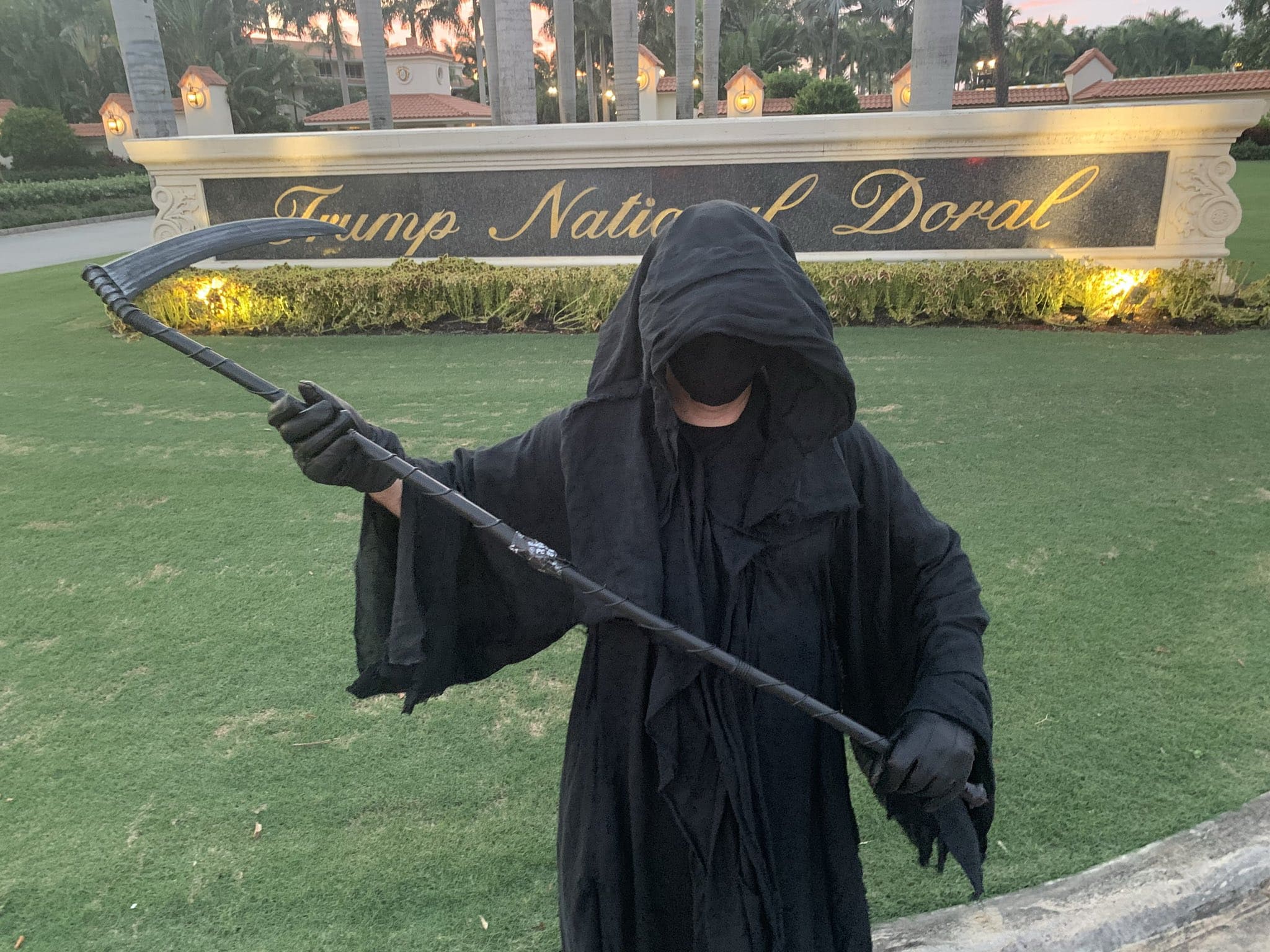 An appeals court ordered a state prosecutor to pursue discipline against Daniel Uhlfelder.

Days after asking The Florida Bar to consider sanctioning an attorney who made national headlines by dressing as the Grim Reaper to criticize Gov. Ron DeSantis’ response to the coronavirus pandemic, an appeals court took the rare step of ordering a state prosecutor to pursue discipline against Santa Rosa Beach lawyer Daniel Uhlfelder.

A three-judge panel of the 1st District Court of Appeal on Friday asked the Bar to consider imposing sanctions against Uhlfelder because of an appeal he filed in a lawsuit that sought to force DeSantis to close the state’s beaches during the pandemic. The panel said there was “no good-faith basis” for the appeal and accused Uhlfelder and his lawyers of using “this court merely as a stage from which to act out their version of political theater.”

Responding to the decision, Uhlfelder made comments that appeared in the Tallahassee Democrat, prompting the appeals court on Monday to go further and direct Northwest Florida State Attorney Ginger Bowden Madden “to file a motion to discipline” Uhlfelder for “putatively unprofessional conduct.”

“It is almost unprecedented for a court to refer a matter to the state attorney’s office to seek discipline or other action against an attorney. I can’t say it’s never happened, but it’s almost unprecedented,” Tallahassee lawyer Richard Greenberg, who represents Uhlfelder on the disciplinary issue, told The News Service of Florida on Thursday.

Uhlfelder, who has traveled throughout the state in a macabre costume of the Grim Reaper to criticize DeSantis, filed the lawsuit in March to try to force the Governor to close beaches to prevent the spread of COVID-19. Leon County Circuit Judge Kevin Carroll ruled that he lacked the authority to order the Governor to shut down beaches, leading to Uhlfelder taking the case to the 1st District Court of Appeal.

The court’s Friday order asking the Bar to probe Uhlfelder’s actions stopped short of mandating financial penalties for pursuing the appeal, which the panel said appeared to be “frivolous and/or filed in bad faith.”

“I do find it interesting that this opinion attacking my critiques of Gov. DeSantis appeared just two days after I launched a (political) committee to remove Ron DeSantis,” Uhlfelder said during the interview, referring to what is dubbed the Remove Ron political committee.

“This statement may violate rules of professional conduct 4-8.2 and 4-8.4; the statement may also violate the oath of admission to The Florida Bar, and also may constitute indirect criminal contempt,” Judges Brad Thomas, Susan Kelsey and Adam Tanenbaum wrote in the order.

One of those rules — entitled “Impugning Qualifications and Integrity of Judges and Other Officers” —prohibits lawyers from making a statement “that the lawyer knows to be false or with reckless disregard as to its truth or falsity concerning the qualifications or integrity of a judge” and other judicial or legal officials.

The other rule covers a litany of misbehavior, such as banning attorneys from engaging in conduct “that is prejudicial to the administration of justice, including to knowingly, or through callous indifference, disparage, humiliate, or discriminate against litigants, jurors, witnesses, court personnel, or other lawyers on any basis.”

Greenberg, who was not involved in last year’s lawsuit or the appeal, maintained that Uhlfelder hasn’t done anything wrong.

“We deny that he did anything improper or anything that violates any of the rules of professional conduct, and we’re going to vigorously defend any charges in the appropriate form,” Greenberg said.

The rule allowing state attorneys to pursue discipline against lawyers will require Bowden Madden to file a motion with a circuit court. A judge will then hold what is essentially a trial in the case and enter a judgment of “dismissal, reprimand, probation, suspension, or disbarment as shall be appropriate to the circumstances.”

If the case is not dismissed, the judgment will be sent to the Florida Supreme Court, which has the authority to issue sanctions against attorneys and judges.

“I’ve been involved in the attorney disciplinary system in Florida for 35 years, and I can’t even remember when I’ve seen this rule utilized,” he said.

The court proceedings will be separate from the Bar probe, Greenberg said.

“I believe that what I’m being asked to do is substitute my judgment for that of the governor on how to respond to this COVID crisis, which has been somewhat of a moving target,” Carroll said during a telephone hearing at the time. “There are 599 circuit judges in Florida at last count, and I don’t think we need to have 599 governors-in-waiting.”

But the judge also encouraged Uhlfelder, who was admitted to The Florida Bar in 1998, to pursue an appeal in the case, “because I do think this is a matter of importance.”

“If the 1st District (Court of Appeal) tells me that I’m wrong and I do have the authority, then I’m glad to address it and go from there. But I do not believe that I have the power to do what you’re asking me to do, and I’m sorry to tell you that the answer is no,” the judge said.

“We’re not going to give up,” Uhlfelder replied.

Uhlfelder, represented by lawyers Marie Mattox and Gautier Kitchen, took the case to the Tallahassee-based appeals court, relying in part on Carroll’s remarks, which they contended “plainly encouraged the appeal.”

But the three-judge panel expressed its displeasure with Uhlfelder in a Nov. 13 order, rejecting the appeal and ordering him to “show cause … why this court should not impose sanctions, including attorney fees and costs, on him and counsel for filing this appeal, the initial brief, and the request for oral argument, which appear to be frivolous and/or filed in bad faith.”.