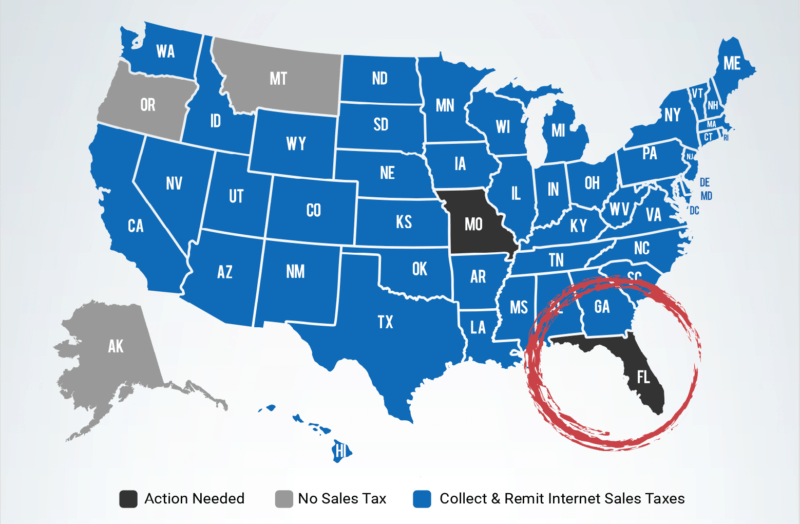 Florida retailers on Monday urged the House Ways and Means Committee to require out-of-state online retailers to collect and pay sales tax on products sold to Floridians, saying that could only help state retailers, who already must do so.

The committee sat for a 75-minute discussion Monday on the status of e-commerce marketplace and of state sales tax collections, now that the U.S. Supreme Court is more than two years removed from a landmark decision allowing states to require out-of-state retailers to collect sales taxes. Of 45 states that impose sales taxes, only two are not uniformly collecting it from out-of-state retailers for e-commerce: Florida and Missouri.

That could change with Rep. Chuck Clemons‘ House Bill 15 and Sen. Joe Gruters‘ Senate Bill 50. They would require such collections by any out-of-state company doing at least $100,000 in retail sales into Florida through the Internet. It also would require “marketplace facilitators” such as Amazon or eBay to do so on behalf of their clients. Most already are. However, Monday’s discussion was not on those bills, committee chair Rep. Bobbie Payne repeatedly insisted. Yet much of the discussion remained about whether the bills would be supported, at least in principal.

From a panel of six business representatives, the committee heard strong support from Florida-based retailers such as Badcock Home Furnishings based in Mulberry, BrandsMart USA based in Hollywood, and Ron Jon Surf Shop based in Cocoa Beach; from the Florida Chamber of Commerce and Florida Retail Federation, which those businesses represented; and from Amazon, which already is collecting and paying sales taxes to Florida, under an independent agreement.

The Florida National Federation of Independent Businesses‘s legislative director Tim Nungesser offered a neutral position. He said its retail members support the effort. But some of its small service businesses like the ability to get good deals on supplies from out-of-state retailers who aren’t charging sales taxes, and they support the tax collection maybe not so much.

Steve DelBianco, president of NetChoice, a Washington-based trade group for online retailers, also offered relative neutrality. He implored that if lawmakers pursue universal collections, that they get Florida to join a coalition of other states that have signed on to standardized laws and practices set forth in the Streamlined Sales Tax cooperative.

DelBianco said most of the big companies already have agreed to collect and pay sales taxes to Florida. The 25 largest represent 60% of internet retail sales, and 24 of them already are collecting and paying sales tax to Florida. So the Sunshine State could only pick up additional sales tax revenue from one of the 25 largest, plus most of those whose sizes fall below the top 25.

“That indicates your enactment… is going to bring incremental revenue,’ he said.

The Florida retailers were emphatic: it’s not about what Florida gets out of expanding the collections; it’s about Florida companies not having to compete with those who don’t pay Florida’s sales taxes. They said Florida gives a 6-8% advantage to their out-of-state competitors who are told they should be paying Florida’s sales taxes but aren’t because they’re not forced to do so.

“Competition doesn’t upset us. We are cross parking lots from places like BestBuy… But when somebody can come into are marketplace and sell something for 7% less than we can just because they’re not collecting the sales tax, that’s not correct,” said Lary Sinewitz, executive vice president of BrandsMart USA, a family-owned appliance and electronics retailer that last year collected and remitted $36 million in sales taxes.

“This issue has been discussed for years. The lack of progress is frankly a little frustrating,” said Debbie Harvey, president of Ron Jon Surf Shop. “I ask that you level the playing field for all of us, but especially to Florida retailers.”

During the discussion, the retailers described the damaging effects of “showrooming,” or visiting a store in-person to view a product and then purchasing at a discounted rate from an online retailer.

“Our sales associates work hard,” said Clara Arrington of Badcock Home Furnishings. “They’re knowledgeable about the products. Customers are able to come in, see the products, see what they look like, how they feel, ask questions… but they’re able to look on their phones and see other retailers that have been given a 6 to 7 percent head start. Not only does that hurt the corporation, but it hurts the dealers who are small business owners and the associates who operate on a commission structure. We’re at a disadvantage because of the unequal enforcement of the sales tax.”

Last year’s effort to require collections of such sales taxes, House Bill 159, didn’t even get a committee hearing.

For the members of the panel assembled to address the Ways and Means Committee, the issues were not when or if Florida would begin demanding out-of-state companies collect and pay sales taxes on internet trade into the Sunshine State. The only concerns they raised seemed to focus on what provisions Florida might make for small retailers, and how Florida would enforce compliance.

That’s one reason DelBianco urged the lawmakers to consider what was being done through the Streamlined coalition, which includes about half the states that are now collecting such taxes, including Georgia, Ohio, and the state where the Supreme Court first settled the issue in the 2018 case of South Dakota v. Wayfair Inc.

Clemons expressed confidence in where Florida is heading, with HB 15, and in general.

“I believe the benefit, Mr. Chairman, for being the next to the last state to help level this playing field is that we will learn from those other states that perhaps did it in haste… and make sure that Florida doesn’t fall into some of those missteps,” Clemons said.

previousSenate committee advances 'agritourism' bill, but changes could be on the horizon