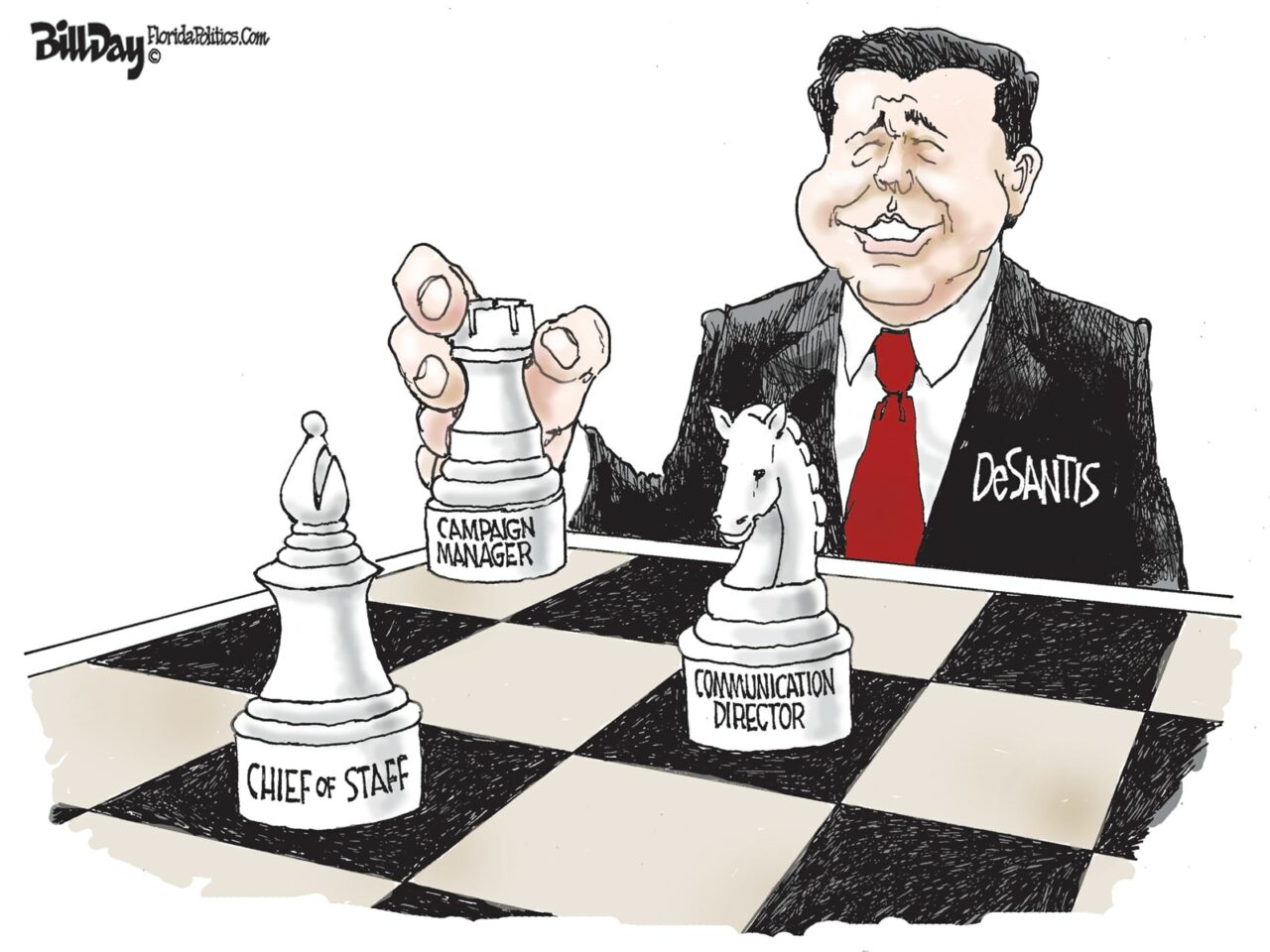 This week, Gov. Ron DeSantis tapped Julie Brown to be the next Secretary at the Department of Business and Professional Regulation.

Brown’s appointment — and the opportunity it gives to the Governor to make an appointment to the five-member Public Service Commission, where Brown has served since 2011 — is the latest chess piece to be moved around the board as DeSantis gears up for the imminent departure of his Chief of Staff, Shane Strum, the 2021 Legislative Session, and the launch of his reelection campaign.

What is illuminating about these personnel moves is that they are happening BEFORE Strum exits the Governor’s Office, not after it.

This is because, according to sources familiar with the Governor’s decision-making process, DeSantis has instructed and empowered Strum to “button up” any and all pending administration staffing issues before he leaves Tallahassee to become CEO of Broward Health.

Before we discuss the most pressing decision facing DeSantis, can we take a moment to give him and Strum credit for their concerted effort to bring some diversity to their administration? Simone Marstiller at AHCA. Shevaun Harris at DCF. John Davis at Lottery. Corey Simon at Volunteer Florida etc., etc. Diversifying his administration is a priority DeSantis does not receive enough recognition for, especially when compared to other Republican governors.

Now, back to the palace intrigue …

The biggest staffing decision still on the table, obviously, is who will succeed Strum.

While several names have been floated, Florida Politics’ sources on the Plaza Level say that the choice is between current Legislative Affairs Director Stephanie Kopelousos and Deputy Chief of Staff Adrian Lukis.

The job probably could be Lukis’ if he were willing to fight for it, some observers contend, but the razor-sharp former House staffer and lawyer has two young children and while Lukis is no stranger to the long hours of DeSantis’ administration, he may not be up for the near round-the-clock duties of a wartime consigliere.

Kopelousos is also well-regarded, both inside and outside the administration. One of the undisputed strengths of the DeSantis administration has been its success getting its agenda through the Legislature. As LAD, she’s probably the most familiar face in the administration to Tallahassee’s lobby corps. That said, she’s been careful to not be perceived as playing favorites with any of the powerhouse lobbying firms.

The thing we keep hearing about Kopelousos is that she may be able to play the same kind of role Jackie Schutz Zeckman played for then-Gov. Rick Scott. After being promoted to Chief of Staff in 2017, Schutz Zeckman deftly straddled the official side and the campaign side of Scott world.

While we’re talking about Lukis and Kopelousos, let’s knock down some of the criticism they each face.

For Lukis, there is whispered concern that his elevation to CoS would give Ballard Partners, where his father Syl is a senior partner, an advantage over other lobbying firms. However, those close to Adrian Lukis and those who have worked with him while he’s served in the DeSantis administration stress there has never been an instance where he has put his thumb on the scale. They also point out that BP was very powerful before Lukis worked for DeSantis. I think it’s a non-issue.

As for Kopelousos, there is the argument that moving her to CoS solves one problem with another — if she becomes CoS, who will take over as Legislative Affairs Director just as Session is getting underway? This would appear to be one of those good problems for the DeSantis administration to have. Anyway, if Stephanie K. does win the job, couldn’t Chris Spencer, former legislative aide to everyone, take over some of the LAD duties?

Along with selecting a new Chief of Staff, DeSantis must also ID a new Communications Director.

Yet, a line of thinking we keep hearing from the Plaza Level is that gone are the days when the CD is seen as, arguably, the second most important position in the executive office.

After Helen Ferre‘s tenure and Fred Piccolo‘s brief time directing comms, the Governor, as well as First Lady Casey DeSantis and Strum, have noticed that NOT having a communications director has been a case of addition by subtraction.

The temperature within the Capitol Press Corps seems to be taken down a notch, with no communications controversies — or Twitter beefs — to speak of the last six weeks.

It’s probably no surprise that DeSantis believes he is the best communicator of his priorities. There may even have been a moment when the administration considered going without a comms director for an extended period — who can the Press Corps ask “gotcha” questions of if there is no one to ask? — went the thinking. But the DeSantises and Strum recognize the importance of having a full-time communications director to guide messaging, especially with the reelection campaign ahead.

The net has been cast far and wide for a new comms director, with even boldface names like Kayleigh McEnany suggested. Meredith Beatrice, currently Director of Strategic Initiatives, has done a very nice job picking up some of the slack since Piccolo’s exit. And I personally think Department of Education Communications Director Taryn Fenske would fit the bill.

One of the current realities of Tallahassee is that capable communications help is in short supply. The gold standard is the Florida Senate’s Katie Betta. Whenever there is a high-profile opening in government communications, Betta is the first person almost everyone asks if they are available. And unfortunately for everyone not named Wilton Simpson, Betta is very much not available.

Bottom line: I genuinely don’t know who the Governor will hire to take on the highly visible, but thankless job of speaking for the administration.

But here’s an important point, maybe the most important point of all in this chess-boarding: whoever is the next communications director has to be able to work seamlessly with the new Chief of Staff and both of them have to work, discreetly and unofficially, hand-in-hand with whomever runs the reelection campaign.

And all of these people have to pass muster with Casey DeSantis.

There has been some chatter — rightly — about “where is Casey?” The once ubiquitous First Lady has taken a step back since the birth of the DeSantises’ third child. There has not been a post from her Twitter account since Christmas.

The First Lady is widely seen as, not necessarily a moderating force on her husband, but a focusing one. You’d be mistaken if you think there is a lot of daylight between Ron and Casey DeSantis over policy issues. Still, even those who are strong supporters of the Governor believe he is at his best — and on his best behavior — when Casey is fully engaged.

After shunning the spotlight the last couple of months — a decision based in part on the pandemic — look for the First Lady to reassert herself soon, especially as the Governor returns to the campaign trail after the Legislative Session.

Now, about that re-election campaign, a few thoughts:

DeSantis should have the pick of the litter of the most capable and credible Republican operatives in Donald Trump‘s GOP. There’s even some speculation that Trump adviser Jason Miller may come work for DeSantis.

But I believe the DeSantis re-election world will be as small and tight a ship as the 2018 campaign. A-list fundraiser Heather Barker is the most important person in this orbit. It just can’t be emphasized enough how close she is to the DeSantises.

One of the concerns about who will work on DeSantis’ reelection is the harsh reality that the time will be short-lived.

Eventually there will be a contract or a decision DeSantis second-guesses and off to the sidelines or out the door you go.

Just ask Brad Herold or Susie Wiles about that.

This scenario is especially an obstacle in DeSantis attracting talent because, the thinking goes, if one works on the 2022 reelection campaign, you won’t still be around for the 2024 presidential run.

But before any of that can happen, Shane Strum, who has served three Florida governors, must make what are, likely, the final moves of his career in public service. There’s no giving up a million-dollar job in the private sector and leaving your family behind to again work in Tallahassee.

What the second chapter of the DeSantis administration looks like after Strum leaves is anyone’s guess. It’s difficult to prove a double negative, especially in politics, but it can’t be stressed enough how tight a ship Strum has run.

Take, for example, the situation which tops this analysis — Beshears’ resignation at DBPR. Beshears exited the agency due to health issues — health issues that were impacted by him having COVID-19.

That a very visible member of an administration that has pushed to re-open the economy while dismissing some COVID-19 safeguards like mask-wearing contracted the virus should have been a larger story in the media. But it wasn’t. That is, in part, because of how Strum kept a tight lid on the situation with Beshears.

Given who the frontrunners are and not taking away from their talents, DeSantis won’t have that kind of Chief of Staff for the final two years of his first term.

Strum is exiting with his boss having a 54% approval and just this past week being mentioned by POLITICO as a “top tier” presidential contender.

For those both supportive and critical of Ron DeSantis, the version of him that emerges after Strum will likely be very different than the one we know now.