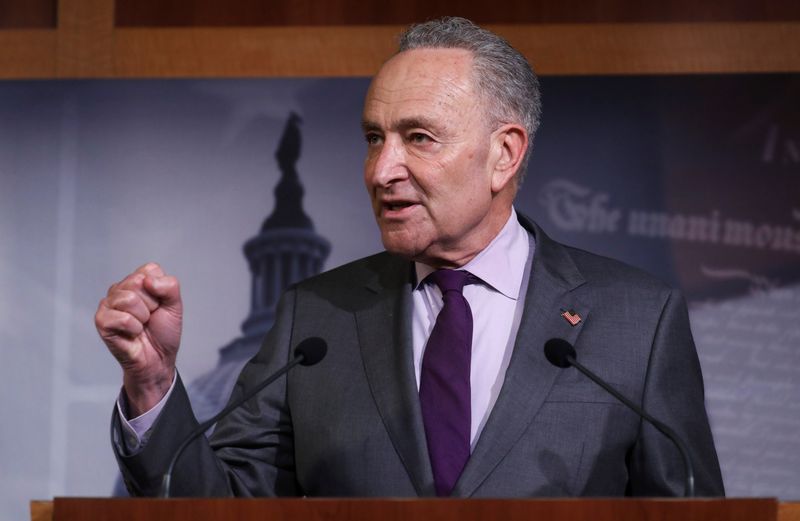 Jon Ossoff's race hasn't been called, but Schumer is welcoming him nonetheless.

In advance of any clear results of the second U.S. Senate election in the Georgia runoffs, Democratic Sen. Chuck Schumer welcomed both Raphael Warnock and Jon Ossoff to the Senate Wednesday morning — sounding as if Democrats have won control.

By almost all conclusions, Warnock has won, defeating Republican Sen. Kelly Loeffler by more than 50,000 votes. The race between Ossoff and Republican Sen. David Perdue was too close to call late Wednesday morning, with Ossoff holding a lead of less than 20,000 votes, with more than that still being counted.

Should Ossoff’s lead hold, which most expect it to, the Senate would be split 50-50 and Democrats would gain control by virtue of Vice President-Elect Kamala Harris having the tie-breaking vote. That most likely would lead to Schumer, the New York Democrat, becoming Senate Majority Leader, taking the gavel from Republican Sen. Mitch McConnell, the Kentucky Republican.

In a press conference shortly before noon Wednesday in the U.S. Capitol, Schumer made it sound like a done deal.

“I’m so proud of both their campaigns and so exited to welcome them to the United States Senate,” Schumer said Wednesday morning of Warnock and Ossoff. “It couldn’t come at a better moment.”

He said a Democratic-controlled Senate would work swiftly to get more coronavirus aid, particularly more direct money to individuals by revisiting plans to provide $2,000 stimulus checks.

“It is one of the first things we want to do once our new Senators are seated,” Schumer said, declining to offer further details.

Beyond that, he looked forward to the time he sees when, “obviously with Democratic control, the ability of Joe Biden to move nominations forward will be easier. The calendar I haven’t begun to look at yet.”

He declined to say whether a Democratic-led Senate would abolish filibusters and other rules that check the power of the party in power. He said Democrats would sit down as a caucus and discuss the best ways to get things done.

Schumer said he has not yet talked with McConnell about the Georgia election results, or of his anticipation of them swapping roles as Minority Leader and Majority Leader.

“I look forward to sitting down with Leader McConnell. We have a lot of things to discuss. We first have to wait until the races are certified and the new Senators are here and Vice President Harris is in the chair before we can put anything in place,” Schumer said. “But certainly we’ll have to talk.”