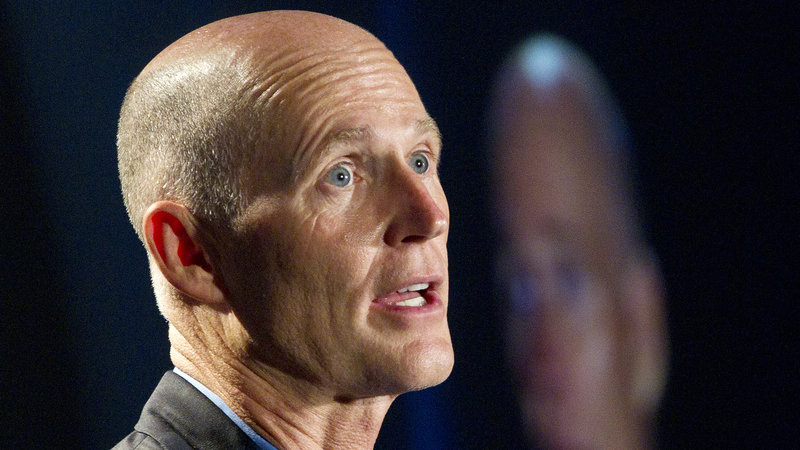 Sen. Rick Scott on Thursday continued to struggle with explaining what his strategy was for ending the so-called Republican Civil War.

Scott, appearing on the Fox News Channel’s “America’s Newsroom,” wrestled to answer questions about a memo and video his National Republican Senatorial Committee released over the last week, in which he proclaimed the conflict “canceled.”

He offered no insight into how he would resolve the rift between pro- and anti-Donald Trump wings of the party. Instead, he talked about how Democrats have moved too far left and discussed his own campaigns.

“We see what the Democratic Party is now. It’s a socialist party. They’re all into socialism. The Republican civil war is absolutely canceled,” Scott told host Dana Perino. “We’re going to focus on issues.”

Scott contended that he won three races that way.

“It’s important to make sure that we focus on issues,” he added. “And this civil war among Republicans is absolutely canceled.”

In a video released earlier in the week, Scott framed the conflict as one between the former President of the United States and the Minority Leader of the Senate.

“I’m sure you’ve heard the media fanning the flames of what they call the Republican civil war. And you’ve seen the sharp words exchanged between Sen. [Mitch] McConnell and President Trump,” Scott said, wearing his familiar Navy cap and pivoting to what has become the signature conflict in the party.

“As chairman of the senatorial committee, many have told me that I should mediate this conflict. Here’s my response: Absolutely not. I am not going to mediate it. I’m going to end it,” Scott said, not detailing a strategy to do so in that clip either.

That creative covered much of the same ground as a memo released Tuesday, one in which Scott said, without evidence beyond assertion, that the civil war was canceled and over.

The memo struck a different tone, with some of its rhetorical appeals abandoned altogether in the video.

“Perhaps in more genteel times, a bunch of infighting and arguing wouldn’t do much damage. Truthfully, I enjoy bantering back and forth, and I have no interest in trying to quell intraparty policy dialogue and debates,” Scott added. “The only way we can lose is if we stop ourselves by needlessly fracturing. Again, now is not the time. Save it for another day.”

With the Conservative Political Action Conference in Orlando this weekend, expect Scott’s assertions that the party’s civil war is over to be put to the test, as Perino herself suggested.

Scott will speak Friday in a mid-afternoon spot, though the focus of the national media will likely be on his successor as Governor, Ron DeSantis, who has excited conservative media and grassroots as a potential 2024 candidate for President. DeSantis speaks first thing in the morning.