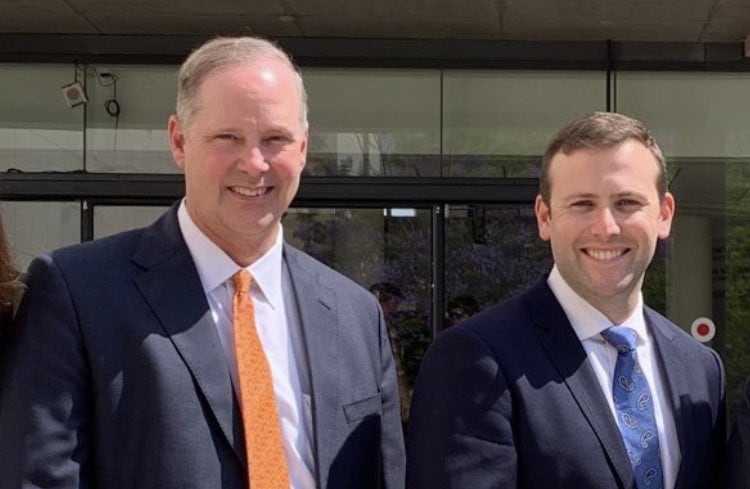 Senate President Wilton Simpson and Speaker Chris Sprowls released a plan to collect sales tax for online purchases by out-of-state retailers. The money generated would be used to avoid an increase in business taxes this year.

Revenue estimators predict collecting sales tax at point of purchase for internet commerce should generate nearly $1 billion in revenue next year alone. A plan endorsed by Simpson and Sprowls would direct all dollars raised this way into Florida’s Unemployment Compensation Trust Fund — at least until that account reaches pre-pandemic levels.

Simpson noted consumers by law already owe online sales tax for purchases made online, but most don’t pay it because that requires sending money independently to the Department of Revenue.

“Under the law, online purchases are not tax-free,” he said. “Every time government turns a blind eye on collecting taxes, we put a greater burden on the businesses and Floridians who are following the law. Making sure we are collecting existing taxes that are owed is the right thing to do.”

The plan immediately earned support from business groups like the Florida Chamber of Commerce.

“Today’s welcome announcement benefits Florida’s main street businesses by leveling the playing field on sales tax collections, while at the same time providing much needed relief from a looming $713 million tax increase on employers,” said Florida Chamber President and CEO Mark Wilson. “The Florida Chamber of Commerce and job creators across our state applaud the leadership of President Simpson and Speaker Sprowls to protect Florida businesses and accelerate the recovery of Florida’s economy from the pandemic-driven recession.”

Whether states could collect those taxes on electronic purchases the same way retailers in brick-and-mortar stores charge at the cash register was the subject of legal disagreement for years. But a U.S. Supreme Court ruling in South Dakota v. Wayfair in 2018 affirmed states could charge the tax at point of sale.

Since that time, 43 of the 45 states that charge a sales tax have put requirements in place for online retailers to collect that money. Florida and Missouri remained the lone holdouts, with Republicans in the House resisting taking up consideration of the matter until this year for fear it would be labeled a tax hike.

But after the coronavirus last year sent the U.S. and state economy into a tailspin and skyrocketed unemployment claims, the state faced a major financial crisis. Replenishing the lost dollars with money raised through the sales tax will allow lawmakers to avoid an increase on businesses still hurting from the crisis.

“Our plan makes responsible use of the resources we have so that we can rescue Florida business owners from a major tax increase,” Sprowls said. “Florida businesses must be able to retain and hire employees and contribute to our recovering economy. They can’t do that if they’re facing substantial tax hikes that, in some cases, would amount to a 700% increase in four years over what they would pay in Florida unemployment (reemployment) taxes under this plan.”

It also makes more palatable the instatement of tax collection by businesses, who will know the alternative would be more money from their own pockets.

“Rather than treating additional revenue that is already owed to the state as a windfall for the spending priorities of the day, the prudent thing to do is to reinvest these funds in our Unemployment Compensation Trust Fund, heading off a tax hike no one could have anticipated on businesses that are trying to survive, and shoring up benefits for the struggling Floridians who have lost their jobs as a result of this pandemic.”

Leadership within both chambers endorsed the plan, released a day before an “e-fairness” plan (SB 50) in the Senate sponsored by Sen. Joe Gruters, a Sarasota Republican, was set to hit the floor. His legislation will be temporarily postponed from floor discussion while Gruters drafts an amendment to link newly generated revenue from collecting online sales tax to replenishing the unemployment trust.

State revenue estimators figure passage of Gruters’ legislation as written will generate $973.6 million in general revenue funds in the 2021-2022 fiscal year and $1.08 billion each year afterward.

Gruters, who has pushed since 2018 to begin collecting sales tax, long argued the current system created an unfair advantage for out-of-state and even out-of-nation sellers compared to Florida businesses who otherwise support the state through a number of other taxes. He praised Sprowls and Simpson for a revenue neutral plan that won’t burden businesses in the state.

“President Simpson and Speaker Sprowls are hitting a home run with this announcement,” Gruters said. “We will be able to help retailers and at the same time help all Florida businesses. They are getting it right. Everybody wins, Florida consumers and businesses.”

Legislation in the Senate already cleared three committees with unanimous support. Meanwhile, companion legislation from Rep. Chuck Clemons (HB 15) was just added to the Thursday agenda for the House Ways and Means Committee. A release from  the presiding officers says Clemons will prepare a strike-all amendment to deposit sales tax revenues collected from out-of-state retailers directly into the unemployment trust.

“Businesses can’t get back to work if they are faced with rising and unpredictable tax increases,” said Rep. Bobby Payne, a Palatka Republican and the Ways and Means chair. “Everything we do in this committee must be approached with the goal of getting and keeping jobs here in Florida and helping our economy recover from the pandemic.

Clemons said passing legislation will ensure Florida applies its sales tax evenly for online and physical sales. “We cannot continue to allow free rides for out-of-state businesses that haven’t paid the sales tax they owe in Florida,” he said.

And a recent workshop on the issue in the House included testimony from retailers that while charging different sales tax based on jurisdiction at one point could be logistically impossible for e-retailers, there are now services like Avalara that calculate sales tax based on street address.

As for the unemployment tax in Florida, that’s charged to businesses with revenues directed to the Unemployment Compensation Trust Fund to assist with eligible unemployment claims. Normally a business that enacts a significant number of layoffs ends up paying a higher rate into the fund, but Gov. Ron DeSantis last year waived much of those costs for businesses forced to let employees go during the pandemic.

But the low revenue triggers an automatic increase in the unemployment tax in January, and more tax increases would kick in automatically if the revenues in the trust remained low. Simspon and Sprowls say using revenue collected in online sales tax revenue should offset that.