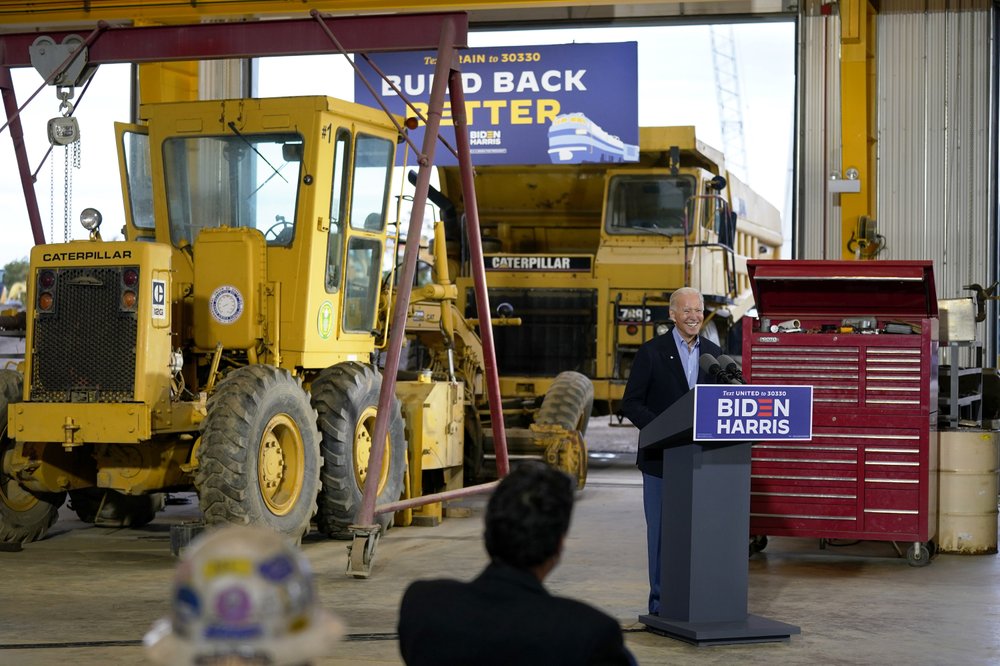 Republicans have begun arguing that theirs is actually the party of the working-class.

When Joe Biden visited this corner of southwestern Pennsylvania in the final weeks before the election, his goal wasn’t to win it so much as to show the area’s overwhelmingly white working-class electorate that his party was at least willing to try.

“A lot of white, working-class Democrats thought we forgot them,” Biden said after touring a union training facility during a late September swing through Westmoreland County. “I get their sense of being left behind.”

Democrats have offered paeans like that since President Franklin D. Roosevelt delivered the New Deal and cemented an alliance with working-class voters. That bond was rooted in the notion that the Democrats’ policies would improves workers’ lives.

But that relationship has steadily frayed, with working-class voters now casting Democrats as the party of cultural elites who talk down to them and reject their values. Such resentment has even driven workers to vote against their seeming economic self-interest, given that GOP tax policy is often geared toward the well-to-do and business.

Now Biden and his party are hoping that by muscling through passage of the $1.9 trillion coronavirus relief and economic stimulus bill — with benefits heavily weighted toward lower- and middle-income Americans — they can win back at least a larger share of working-class voters.

The president is flying Tuesday to Delaware County, outside Philadelphia, to help promote the new aid.

Still, that proposition — which Republicans dismiss as a “liberal wish list” — will be tested in places such as Westmoreland County. More than 250 miles west, the county was a Democratic stronghold until its industrial base withered.

“These are the kind of issues that are a little bit more meat-and-potatoes and that we should focus on in this area,” said Paul Adams, a former county Democratic official.

“Despite the fact that our sympathies may be with other issues,” Adams said, referring to larger efforts to tackle racism and promote gay rights, “it’s hard to get traction with that with the local population.”

Democrats are banking on direct payments of $1,400 to most Americans under the COVID-19 law as a strong counter to that criticism. The package also dramatically expands tax credits for families with children, bolsters unemployment benefits, reduces taxes on student loan debt and lowers costs of the Obama-era health law’s coverage.

Ed Rendell, a former Democratic governor of Pennsylvania, said the legislation won’t singlehandedly solve the party’s problems with working-class voters but is “a good first mile down the road.”

“It is incumbent upon us to make the case — which I believe has always been there to make, we’ve just done a (terrible) job — that we’re the party of the working guy,” Rendell said. “And the Republicans are using smoke and mirrors.”

By some estimates, the law could reduce the nation’s poverty rate by one-third. That may have an outsize impact on Westmoreland County, whose under-65 population receives more federal disability benefits than the national average and where less than one-third of residents have a college degree, according to federal estimates.

The town of Jeannette used to boast of being the “Glass Capital of the World,” but nearly all of those factories are long gone. A nearby Volkswagen plant shuttered in 1988, wiping out 2,500 jobs.

But the strong economic incentives in the relief bill are colliding with the structural support here for former President Donald Trump. Trump 2020 yard signs and flags — often carefully preserved against winter snows — still line the hilly roadsides beyond the hulking husks of the abandoned bottle works. The Democratic county sheriff became a Republican last summer, saying his old party wasn’t supporting law enforcement strongly enough during demonstrations that swept the country over police brutality and racism.

Like Biden, Trump campaigned in Westmoreland County, and he won the county by nearly 30 percentage points. But Biden got about 11,000 more votes here than Hillary Clinton did in 2016. That’s significant given that Biden won Pennsylvania by only about 80,500 votes.

Bill Bretz, chairman of the county’s Republican Party, said the new direct economic benefits are canceled out by other Biden administration policies. That includes nixing the Keystone XL pipeline, which has raised fears that Pennsylvania’s natural gas producers could face similar limits in the name of battling climate change.

“There’s a lot of people who are still registered Democrats, who still hold on to those working-class Democratic values,” Bretz said. “But their sensitivities are violated by the national Democratic platform.”

Indeed, people like Mary Wilmes, who owns a gift shop in the county seat of Greensburg, doesn’t like to rile customers with talk of politics. But she did offer praise for Biden and his work promoting the stimulus. “He’s giving you the sense that he cares about people,” she said.

“It’s not like before,” Wilmes added, “when what we had was, ‘It’s all about himself.’”

The white working-class helped fuel Trump’s 2016 rise, but those voters have actually been gravitating to Republicans since 1992, according to research by Noam Lupu, a political science professor at Vanderbilt University. Working-class African Americans have remained steadfastly loyal to Democrats, but Trump saw his support among Latinos improve in 2020. That could indicate that a broader shift away from Democrats may be resonating with some Hispanics.

“I think, for the Democratic Party, it’s a tough coalition to maintain: working-class voters who are really focused on their economic interests, but, at the same time, very progressive social positions for the urban, educated voters,” Lupu said. “I think Biden has an opportunity to rebrand the party a little bit.”

Working-class generally denotes people without college degrees who have lower wage jobs. It also can mean better educated, better paid middle-class earners who don’t like defining themselves as rich or poor. Trump won 62% of white voters without a college degree in November, according to AP VoteCast, a nationwide survey of the electorate.

During the campaign, Biden tried to contrast what he called the working family sensitivities of his birth city of Scranton, Pennsylvania, with Trump’s Fifth Avenue, big city values. Biden also has pledged to be “ the most pro-union president you’ve ever seen.”

Some top Republicans have begun arguing that theirs is actually the party of the working-class — mixing economic appeal with key social issues such as promoting gun rights and opposing abortion, along with emphasizing opposition to the cancellation of some Dr. Seuss books and dropping “Mr.” from Potato Head so the toy better promotes gender inclusivity.

Sen. Ted Cruz, R-Texas, recently declared the GOP the “party of steel workers and construction workers and taxi drivers and cops and firefighters and waitresses.” He has proposed a $10,000 scholarship helping parents who live in areas where schools remain shuttered because of the virus to pay for education elsewhere.

Levy said Democrats can now point to concrete provisions of the relief law, which he said also shows that the GOP is “never going to support working-class people.”

But some say the stimulus package may prove hollow over the long term.

“It’s a good thing now,” Lucas Szekely, a 19-year-old community college student from Irwin, west of Jeannette, said of getting another stimulus check. “But you can’t keep doing it forever.”

previousWarp-speed spending and other surreal stats of COVID times