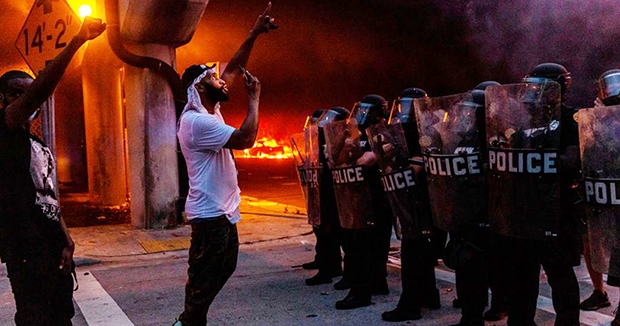 Voters of all ages, races and party affiliation don't like HB 1.

The poll, commissioned by Florida Politics, found when voters were asked about legislation increasing penalties for just attending protests where violence breaks out, nearly 40% called the proposal a very bad idea. Another 23% consider the bill a somewhat bad idea.

Meanwhile, just over 19% consider the legislation a very good idea, and 18% brand it somewhat good.

With 63% viewing the bill unfavorably, it’s likely no surprise the legislation inspired some raucous protest on its own or that lawmakers have been inundated with emails and phone calls from concerned constituents.

Rep. Andrew Learned, a Brandon Democrat who sits on all three House committees that heard the bill, told Florida Politics his office had received 14,000 emails on the measure. Learned said only six of those emails were in support.

The bill would create tougher penalties for already existing crimes when the person commits the act within a group of three or more people.

The bill also creates the crime of “mob intimidation,” which the bill describes as when a group of three or more people “with a common intent, to compel or induce, or attempt to compel or induce, another person by force, or threat of force, to do any act or to assume or abandon a particular viewpoint.”

Holding the vaunted numbering of HB 1, the legislation serves as a top priority for legislative leaders this year. But even among Republican voters, more than half rate the idea as a poor one, with an even split between those who call it very bad and a somewhat bad idea. Meanwhile, 53% of Democrats classify it as very bad, as do 41% of independents.

Also answering in the extreme negative are 53% of Black and 38% of Hispanic voters. But a very bad rating was also the pick of a plurality of all racial demographics, including White voters.

A majority of voters in every age group also looked down at the proposal. Notably, the strongest objections came from voters age 50 to 65, 46% of whom consider the idea very bad, compared to 45% of voters under 30 and 27% of voters age 70 and up.

DeSantis first proposed the legislation last summer as protests broke out in streets in every major city across America in response to George Floyd‘s death at the hands of a Minneapolis police officer.

Some of those turned violent, though Florida’s protests were largely peaceful.

The certification of President Joe Biden’s election victory over Donald Trump earlier this year also resulted in a riot led by Trump supporters at the U.S. Capitol. DeSantis made clear he feels the law should apply equally to left-wing and right-wing protests.

HB 1 cleared all of its House committees on party lines. Meanwhile, the Senate companion (SB 484) has yet to get a hearing.

A floor vote in the House is imminent, with the bill on the agenda for Thursday’s floor session in the House.