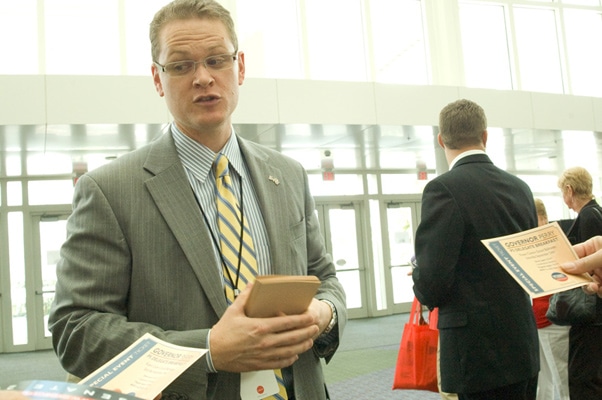 Hansen was miserable. Until he got vaccinated.

Nick Hansen, a former staffer to Sen. Jeff Brandes and prominent GOP strategist, is speaking out in favor of COVID-19 vaccines.

Hansen took to Facebook Sunday with a lengthy missive about his own personal experience with the virus, and how the vaccine helped him overcome lingering effects of his own bout with COVID-19, an effect known as long-haulers.

The post details Hansen’s diagnosis with COVID-19 in December, and his subsequent suffering from chronic headaches and overall lethargy that made him feel “like a shadow” of himself.

He did research and found evidence to suggest getting a vaccine could alleviate his persistent symptoms, the post explains.

So, Hansen got the shot.

“Within hours my headache subsided,” Hansen wrote. “The following day I felt like my personality was back. I was (cautiously) optimistic because (I’ve) had a ‘good day’ before.  However, every day since I have improved and am now as close to 100% as I have felt since last year.”

He went on to encourage friends, and anyone else reading his testimonial, to “look into it.”

But Hansen’s post only scratched the surface in describing the anguish he felt in the weeks and months after his initial diagnosis. It also represents a counter-narrative to what has become assumed about conservatives being less likely to take the virus seriously and more likely to forgo vaccination.

“There were days I was in tears because I couldn’t finish work. There was a time I couldn’t drive. I had to delay the start of the new job,” Hansen said.

Hansen, a father of five, found it difficult to get through each day. He described crippling fatigue that left him with an almost debilitating brain fog.

A work call drained all the energy he could muster one day, Hansen said, prompting him to “pass out” after it ended because he had nothing left after just managing a basic presence among his peers.

“On my worst days I felt like an 85-year-old man,” he said. “In my head I knew all these things, but I couldn’t execute them.”

He said it took him an hour to write his post. He wavered on whether to reveal such personal health details, and whether his story was even worth telling.

“But when I was reading these stories about people, I thought, ‘that’s me,’” he said.

So, his thought went, maybe there were others like him who were suffering through lingering symptoms who might not be aware that a vaccine could help.

An estimated 10% to 30% of COVID-19 patients suffer from “long COVID” or long-haulers, according to an NPR report in late March.

Survivor Corps, a patient advocacy group for people with long COVID, recently surveyed nearly 900 members and found 41% reported slight relief to full recovery shortly after getting the vaccine, according to CNBC.

“I read a lot and I’m really engaged and I found this out just being a consumer of information, but a lot of people aren’t,” Hansen said. “Maybe they don’t realize the vaccine could help them.”

So far, Hansen said the reaction has been positive. He’s received calls from people he hasn’t heard from in 10 years, thanking him for sharing his story.

“I did not expect that,” Hansen said.

And to those, even those who share his conservative mindset, who are still reluctant to get vaccinated, or who still believe COVID-19 is not real or “just like the flu,” Hansen has a message.

“For some people it is, but for a lot of people it’s not,” he said.

“You take your chances. I’m a 38-year-old man, I eat really healthy, I ran every day, I’m highly active. This will put you down. I didn’t have to go the hospital, but you are opening yourself to all sorts of things that you can’t imagine.”

previousJoe Henderson: Ron DeSantis could have picked a better day to rail about 'woke'