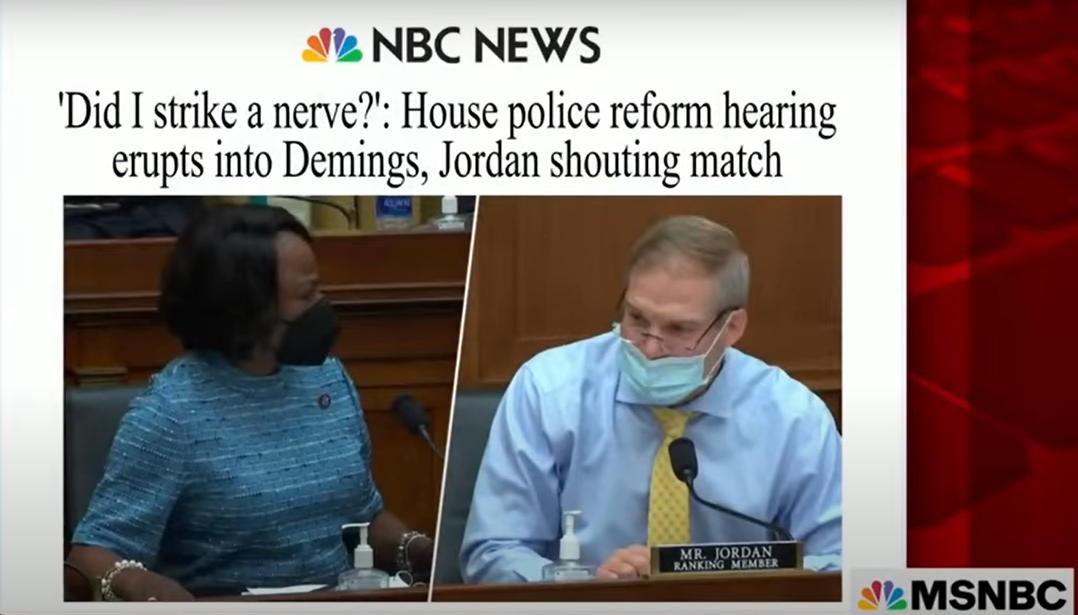 U.S. Rep. Val Demings of Orlando was on the list of people Joe Biden, then-Democratic nominee for President, considered for his running mate.

She wasn’t chosen, but she hasn’t been forgotten, either.

That much became clear Wednesday on the “Morning Joe” talk show on MSNBC. Demings, a former Police Chief in Orlando, gave her opinion about the murder conviction of disgraced ex-cop Derek Chauvin of Minneapolis.

She called it “a step in the right direction.”

The real topic, though, was the shouting match she had on the House floor the day before with Republican U.S. Rep. Jim Jordan, who is from Ohio and consistently embarrasses the state where I grew up.

Speaking as a transplanted Buckeye of nearly a half-century, I wish Jordan would move immediately to Michigan. Better yet, Pluto.

Demings, who spent 27 years on the Orlando Police force, spoke forcefully and often about the fable that forces of darkness stole the 2020 election from what’s-his-name from Mar-a-Lago. Jordan is a foremost proponent of that lie.

She was at it again Tuesday during a debate about a proposed GOP amendment to the COVID-19 hate crime bill. Republicans want a provision that would prevent efforts to defund police.

“It’s interesting to see my colleagues on the other side of the aisle promote the police when it’s politically convenient,” she said.

That referred to the Jan. 6 attack by Trump insurgents and wingnuts on the U.S. Capitol.

Jordan started shouting, Demings shouted back, at one point asking heatedly, “Did I strike a nerve?”

And, well, 2 million YouTube views later of the confrontation, Demings was in friendly MSNBC territory and receiving the ascending-star treatment.

Former Missouri Sen. Claire McCaskill, a network commentator, gushed about Demings, and then, well, here’s what she said.

“You have been called Officer Demings. I’m betting you were called Sergeant Demings, probably Captain Demings, Chief Demings, and now Congresswoman Demings,” McCaskill said. “On behalf of the people of Florida, would you please let us know can we please call you Sen. Demings?”

Demings’ name comes up often as a challenger in 2022 to Republican U.S. Sen. Marco Rubio.

“Well, Senator, as you can see, based on yesterday, we still have a heckuva lot of work to do in the House of Representatives,” she said.

Co-host Mika Brzezinski chimed in, “And I am seconding what Claire McCaskill said Congresswoman Val Demings.”

Challenging Rubio would be a risky gambit, though. Trump endorsed him recently (Florida is a state where that matters), and he has the power of two-term incumbency.

Demings also told The Washington Post earlier this year that she was “keeping the door open” for a potential 2022 run for Governor or the Senate.

Beyond that, she has remained coy — well, except when she’s on the House floor and Jim Jordan grandstands. If she is looking to move beyond the House, the Senate probably would be her best bet. Democratic Agriculture Commissioner Nikki Fried has all but officially announced her campaign for Governor, and U.S. Rep. Charlie Crist might get in, too.

As Tuesday’s skirmish with the Mouth That Roared showed, though, Demings isn’t afraid of a fight. Actually, she seemed to enjoy it, and that’s not something Democrats in this state could always say.