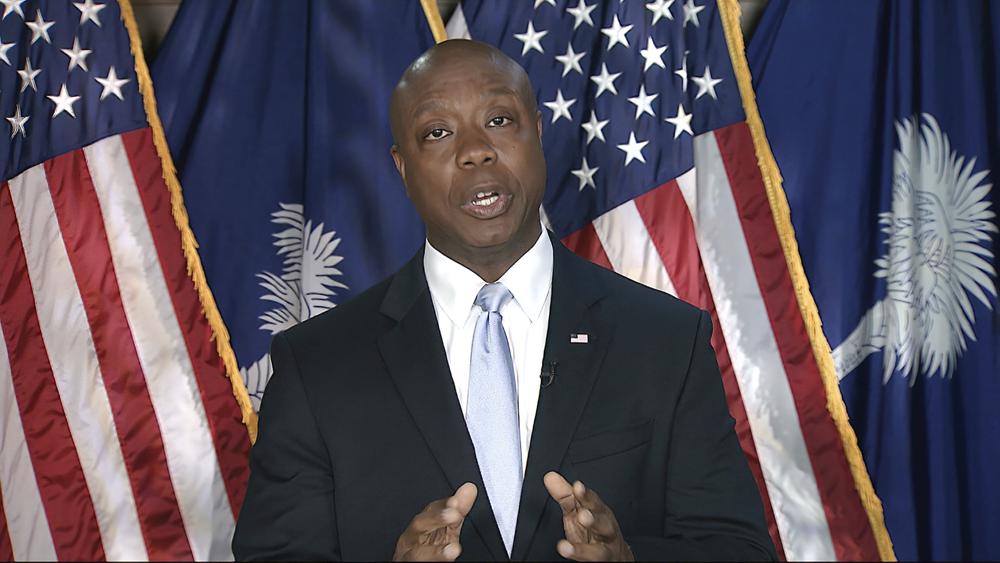 "Three months in, the actions of the president and his party are pulling us further apart," he said.

Sen. Tim Scott accused Democrats on Wednesday of dividing the country and suggested they’re wielding race as “a political weapon,” using the official Republican response to President Joe Biden’s maiden speech to Congress to credit the GOP for leading the country out of its pandemic struggles and toward a hopeful future.

Scott, in his nationally televised rebuttal of Biden’s address, belittled the new president’s initial priorities — aimed at combating the deadly virus and spurring the economy — as wasteful expansions of big government.

“We should be expanding options and opportunities for all families,” said Scott, who preaches a message of optimism while remaining a loyal supporter of former President Donald Trump, “not throwing money at certain issues because Democrats think they know best.”

Citing the partisan battle over Biden’s $1.9 trillion COVID-19 relief bill, which Congress approved over unanimous GOP opposition, Scott said: “We need policies and progress that bring us closer together. But three months in, the actions of the president and his party are pulling us further apart.”

But the Senate’s only Black Republican saved some of his sharpest comments for the fraught subject of race. Scott recounted his rise from a low-income family and “the pain” of repeatedly being pulled over by police while driving but said, “Hear me clearly: America is not a racist country.”

Asked Thursday about Scott’s comment, Vice President Kamala Harris told ABC’s “Good Morning America, “No, I don’t think America is a racist country but we also do have to speak truth about the history of racism in our country.”

She added: “One of the greatest threats to our national security is domestic terrorism manifested by white supremacists. These are issues that we must confront, and it does not help to heal our country, to unify us as a people, to ignore the realities of that”

Biden and other Democrats have cited institutional racism as a major national problem.

While acknowledging that “our healing is not finished,” Scott suggested that Democrats and liberals have turned the race issue upside down.

“It’s backwards to fight discrimination with different discrimination,” he said, without providing examples of what he meant. “And it’s wrong to try to use our painful past to dishonestly shut down debates in the present.”

He added, “Race is not a political weapon to settle every issue the way one side wants.”

Biden’s address came three months into a presidency that’s seen Republicans repeatedly accuse him of abandoning his campaign pledge to seek bipartisan compromises. While Biden cited a rosy roster of accomplishments and goals in his own speech — “America is on the move again,” he said — Scott said it was Republicans who had bolstered the economy and began to tame the pandemic.

“This should be a joyful springtime for our nation,” said Scott, citing the Trump administration’s role in helping spur vaccine development and beginning a revival of the staggered economy. “This administration inherited a tide that had already turned. The coronavirus is on the run!”

The address also came as Scott, a 10-year veteran of Congress who usually keeps a low profile, has found a spotlight leading his party in a bipartisan effort to overhaul police procedures. That drive was prompted by last May’s slaying of George Floyd, a Black man, and energized anew by this month’s conviction of a white former Minneapolis police officer for the killing.

Scott criticized many school systems’ decisions to halt or limit in-person classes during the pandemic as a safety measure. Those closures, which were recommended by public health officials, have drawn fire from Republicans as an overreaction and become part of the GOP’s culture war with Democrats.

“Locking vulnerable kids out of the classroom is locking adults out of their future,” Scott said.

Scott cited low unemployment rates for minorities before the pandemic struck last year, calling it “the most inclusive economy in my lifetime.” And he praised GOP efforts including tax breaks to encourage business investments in low-income communities.

“Our best future won’t come from Washington schemes or socialist dreams,” he said, echoing the GOP’s oft-repeated theme that Democrats are pushing far-left plans. “It will come from you — the American people.”

Scott has long embraced themes of opportunity and a cheerful optimism that were conservative calling cards during the Reagan era. He retold the story of a grandfather who left grade school to pick cotton and led a lifetime of illiteracy, his own childhood living in a single bedroom with his single mother and brother and nearly failing out of high school.

Scott said his family went “from cotton to Congress in one lifetime. So I am more than hopeful — I am confident — that our finest hour is yet to come.”

Those messages could make Scott a positive messenger for the GOP in what could otherwise be a divisive 2022 election campaign, when the party has high hopes of winning control of the House and perhaps the Senate. Scott is strongly favored to be reelected next year.

Over the years, Scott at times called out Trump in measured tones over some of his racially offensive broadsides. Yet he’s remained a strong supporter of the former president and opposed Trump’s removal from office after the House impeached him for inciting the Jan. 6 attack on the Capitol.