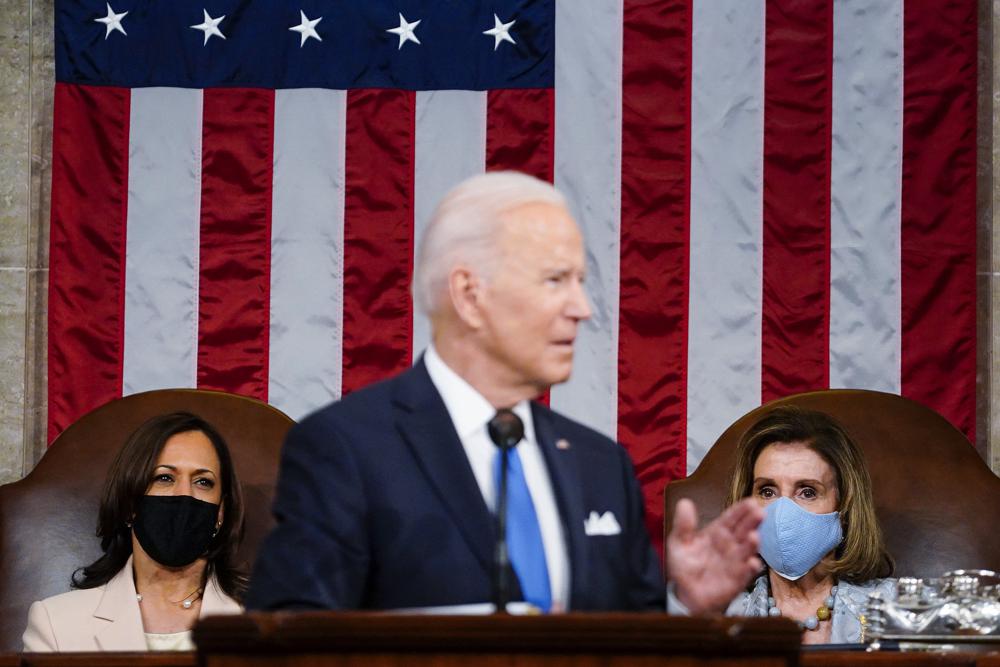 There are some indications that Americans back Biden’s aggressive approach.

Forty years ago, a newly elected American president declared government the source of many of the nation’s problems, reshaping the parameters of U.S. politics for decades to come. On Wednesday night, President Joe Biden unabashedly embraced government as the solution.

In an address to a joint session of Congress and the nation, Biden offered up government as both an organizing principle for the nation’s democracy and an engine for economic growth and social well-being. He issued a pointed rejoinder to the fiscal philosophy espoused by Ronald Reagan in the 1980s, arguing that “trickle-down economics has never worked,” and offered in its place an eye-popping $4 trillion in new government spending to bolster infrastructure and remake a social safety net that buckled for many Americans during the COVID-19 pandemic.

“We have to prove democracy still works, that our government still works and can deliver for our people,” Biden declared.

One hundred days into his presidency, Biden is riding a wave of early momentum after securing passage of a $1.9 trillion pandemic relief fund and surging coronavirus vaccine supplies across the country. But his ability to enact the next phases of his domestic agenda is deeply uncertain given his narrow majorities in Congress, near-universal opposition thus far from Republicans and wariness from some moderate Democrats.

Yet Biden, to the surprise of some lawmakers in both parties, has not responded to those political realities by curtailing or moderating his asks of Congress. While he made overtures to Republicans in his address Wednesday, particularly for partnership on infrastructure spending, he also made clear that he was willing to press forward without them, confident that a once-in-a-generation influx of government spending will yield results he can sell to the public in next year’s midterm elections and perhaps in the 2024 campaign, if he seeks a second term.

Biden’s posture has been cheered by many Democrats who are eager to move past the political constructs erected during the Reagan era, which left the party caught between arguing for more investments for lower- and middle-class Americans and wary of being branded as tax-and-spend liberals.

As he sought reelection in 1996, Democratic President Bill Clinton stated in his own address to Congress that the “era of big government is over,” though he also said Americans should not be “left to fend for themselves.” The next Democratic president, Barack Obama, muscled through his signature health care law and a stimulus plan to pull the economy out of recession, but faced fierce political blowback that cost him his congressional majorities and quickly curtailed many of his other domestic policy ambitions.

But the Democratic Party as a whole has grown more comfortable in recent years with more liberal policies, pushed along in part by a younger, more diverse array of politicians who argue that persistent inequality, particularly for minorities, requires broader overhauls of the nation’s domestic policies. The inequities exposed by the pandemic, with Black and Hispanic Americans disproportionately impacted both by the COVID-19 virus and the economic fallout, hastened those arguments.

And while Biden — a white, 78-year-old career politician with a moderate record — may not have been the first choice of his party’s left flank, his closing arguments of the 2020 campaign evoked the ideals of President Franklin D. Roosevelt’s expansive progressive agenda and the notion of what government can accomplish in a crisis.

He harkened back to Roosevelt again Wednesday night, recalling that in another era where the nation’s democracy was tested, “Roosevelt reminded us, in America: We do our part.”

Biden’s advisers say his decades of Washington experience — he was a young senator during Reagan’s presidency and went on to serve as Obama’s vice president — have cemented his belief that this is another such moment in history that cries out for the type of federal government interventions that may not have been palatable for his most recent predecessors.

“This country has been ravaged by social injustices, and in the past year, by the pandemic,” said Maria Cardona, a Democratic strategist who worked in the Clinton administration. “Neither was incremental in the ways they ravaged our communities. So the response can’t be incremental.”

There are some indications that Americans back Biden’s aggressive approach. According to The Associated Press’ VoteCast survey of the electorate, 57% of voters in the 2020 presidential election said the government should be doing more to solve problems, while 41% said it was doing too many things better left to businesses and individuals.

Those who backed a broader government role in addressing the nation’s challenges overwhelmingly voted for Biden. But the AP VoteCast survey also showed that 28% of voters who supported former President Donald Trump were in favor of a more active federal government.

Biden appealed directly to those voters in Wednesday’s address, particularly those he said “feel left behind and forgotten in an economy that’s rapidly changing.” He promised them well-paying jobs that don’t require a college education.

So far, Republican lawmakers are unmoved by such promises. No GOP lawmakers voted for Biden’s pandemic relief package earlier this year and most are skeptical of his proposed $2.3 trillion infrastructure proposal, to be financed by higher taxes on corporations. The president upped the ante even more Wednesday night, unveiling a $1.8 trillion family plan for universal preschool, two years of free community college, $225 billion for child care and monthly payments of at least $250 to parents.

After Biden’s address, Utah Sen. Mitt Romney — one of the more centrist Republicans the White House has been courting — bristled at the totality of the president’s asks.

“Six trillion and counting,” he said. “He would like Republicans to vote for his plan. But in terms of meeting in the middle, that hasn’t been something the administration has shown.”