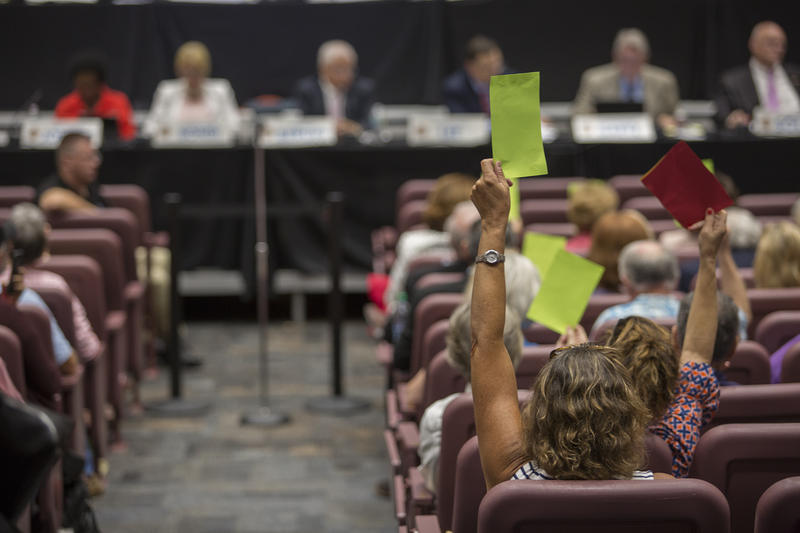 The American Civil Liberties Union (ACLU) of Florida filed a lawsuit Saturday to block a bill signed into law by Gov. Ron DeSantis Friday that would implement contribution limits on citizen-led ballot initiatives.

The lawsuit challenges SB 1890, which would impose a $3,000 limit on contributions to political committees backing proposed constitutional amendments during the signature-gathering process. That’s the same restriction placed on donations to statewide candidates.

But, the ACLU claims in its lawsuit that limiting contributions to state ballot initiatives unconstitutionally burdens and chills Florida citizens’ free speech and association, as protected by the First Amendment.

“Over the last several years, the Florida Legislature has passed dozens of bills to undermine the citizen initiative process,” Nicholas Warren, staff attorney at the ACLU of Florida, said in a statement. “Florida citizens’ right to participate directly in our democracy is protected by the Constitution, and yet, the Legislature and governor have made it their mission to make it even more difficult for Floridians to enact change. This latest attempt is a clear and obvious violation of Floridians’ free speech rights.”

However, Estero Republican Sen. Ray Rodrigues, who filed the bill, has said wealthy donors contributing to campaigns to amend the Florida Constitution is a new phenomenon. Palatka Republican Rep. Bobby Payne, who sponsored the House version (HB 699), shared those sentiments.

“Let me remind you that this bill was trying to stop millionaires, which we’ve seen, 25 millionaires, billionaires contribute over $70 million to out-of-state elections in the last four years, 12 of which have been in Florida,” Payne told House members ahead of the 75-40 vote in that chamber last week.

The state has a history with citizen-led ballot proposals, making this just the latest effort to slow the evolution of the Florida Constitution.

In recent years, lawmakers have imposed restrictions limiting paid signature gatherings and shortening the time for gathering signatures. Democrats contend the costs for campaigns to get initiatives on the ballot have increased because of recent legislation.

The state requires a petition with a number of signatures equal to 8% of the votes cast in the preceding presidential election in order for the proposal to be recognized.

Decades ago, Florida had a contribution cap for all political committees, and the U.S. Court of Appeals and Supreme Court struck down that limit as violating the First Amendment, which protects our freedom to express views on political matters, including to advance ballot measures.

Citizen-led initiatives, a method that was first adopted in 1968, are one of five ways constitutional amendments can be placed on the ballot in Florida. Voters must approve citizen initiatives by a 60% vote for provisions to get amended to the constitution.

Already, the 2022 cycle might be seeing fewer initiatives than in recent years. Last month, the Florida Supreme Court blocked a proposed constitutional amendment aimed at legalizing recreational marijuana use, saying the proposed ballot wording would have been misleading.

Floridians have expressed overall disapproval for efforts to make it tougher to amend the state’s constitution.

The suit was filed in the U.S. District Court for the Northern District of Florida.

previousWinner and Loser of the Week in Florida politics — Week of 5.2.21