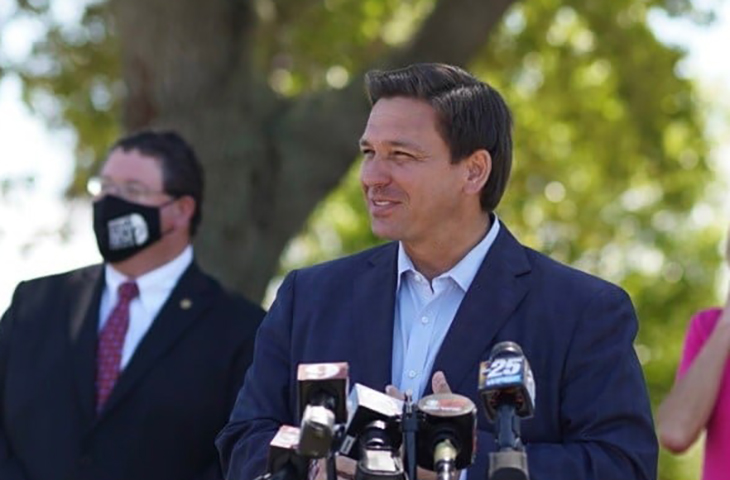 The Governor took his China critique to Fox News.

Gov. Ron DeSantis returned to the Sunday Morning Futures show this week, where he had an extended runway to sound off against familiar nemeses.

In comments to host Maria Bartiromo on the Fox News Channel, DeSantis depicted President Joe Biden and the tech industry as essentially following the lead of communist Beijing in both so-called lockdowns and the aftermath.

Asked to appraise Biden’s performance at the G-7 summit, DeSantis dismissed the President as “not nearly as assertive as someone like Donald Trump was” and said Biden’s “performance may have played well with European elites, but [DeSantis is] not sure there was much in it for Middle America.”

DeSantis said he didn’t “hear much about holding China accountable,” and he lamented a lack of messaging about that as well as “any bureaucrats in the United States that may have been covering up.”

From there, the Governor moved on to draw connections between Facebook’s Mark Zuckerberg and Dr. Anthony Fauci.

“What they censored was actually true. They called it a conspiracy theory if you said this may have leaked from a lab. They were also censoring around the same time last year any criticisms of lockdowns, and we know now that lockdowns didn’t work. States like Florida that were open were better off doing it.”

“Here’s an example of working with Fauci where Facebook, you can argue, is essentially acting as an arm of the state. They’re suppressing what the government wants suppressed,” DeSantis said.

“They’re not just censoring based on partisanship. Obviously, we’ve seen conservatives be censored. But when they’re censoring things about some of the most important issues — how COVID started? whether lockdowns work — they’re really doing damage to society.”

DeSantis also contended that lockdowns, of which he’s been critical even as Florida locked down on the local level early in the pandemic, were a Chinese construct, aided by “very deferential” Big Tech.

“China was very much invested in promoting lockdowns as we started getting into 2020, February, March,” DeSantis said.

Facebook and “some of these big companies, they were really serving to elevate the lockdown hysteria and to absolutely suppress people who were raising questions and concerns about lockdowns,” DeSantis added.

“The relationship between Big Tech and the CCP is very problematic,” DeSantis said, saying the same could be said for other American corporations and the Chinese Communist Party.

DeSantis went on to denounce, again, the “astounding cover-up” of COVID-19, as well as the failure to “hold China accountable.”

Americans “want to see a policy that’s more assertive toward China,” DeSantis added, again denouncing “deference” toward China near the end of the interview.

As is often the case, DeSantis was compelled to address 2024 possibilities, including a potential run as Donald Trump‘s running mate.

DeSantis, who has nearly $40 million banked in a campaign committee supporting his reelection, said he had not talked to Trump or anyone about plans beyond next year.

“I haven’t had any discussions with anybody beyond what we’re doing now,” DeSantis said, adding that the strategy is “one day at a time.”