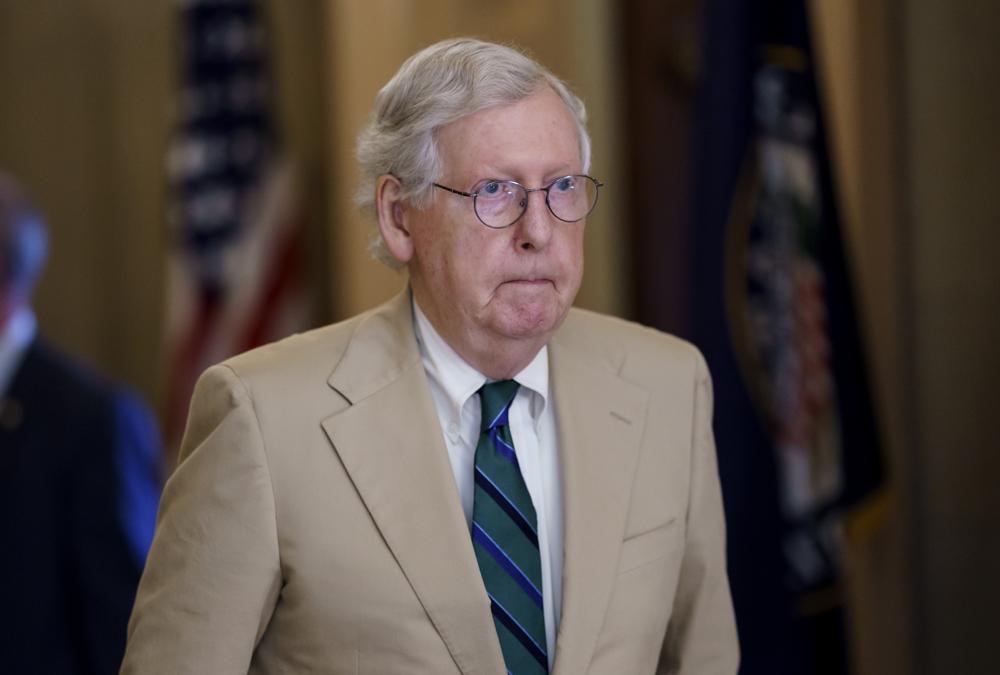 An effort to nationalize election rules has received pushback from Republicans.

The Democrats’ expansive elections and voting bill is all but certain to be rejected in a key test vote in the Senate, providing a dramatic example of Republicans’ use of the filibuster to block legislation and forcing hard questions for Democrats over next steps.

The far-reaching proposal, at nearly 900 pages, is viewed by backers as the civil rights issue of the era, legislation that is suddenly of the highest priority after the 2020 election as states impose restrictive new laws that could make it more difficult to vote. In the evenly split Senate, Republicans are united in opposition, seeing the bill as federal overreach and denying Democrats the 60 votes that would be needed to overcome the filibuster and begin debate.

“Are you afraid to debate?” Senate Majority Leader Chuck Schumer said Monday ahead of the vote. “We’re about to find out.”

Months in the making, Tuesday’s showdown over the For the People Act, as it is called, is hardly the end of the road but the start of long campaign ahead. President Joe Biden has vowed what the White House calls the “fight of his presidency” over ensuring Americans’ access to the polls. At stake is not only election rules that make it easier to vote but also Democrats’ own ability to confront the limits of bipartisanship and decide whether or not the filibuster rules should change.

Republican leader Mitch McConnell blasted the legislation ahead of the debate as a “disastrous proposal” that will get “no quarter” in the Senate.

The party that controls Washington has been preparing for this moment for months, even as lawmakers faced their own internal divisions over the sprawling bill, which would remove hurdles to voting erected in the name of election security, curtail the influence of big money in politics and reduce partisan influence over the drawing of congressional districts.

As recently as last week, Sen. Joe Manchin, a moderate West Virginia Democrat, said he couldn’t support the bill without changes he wanted as a way to draw Republican support.

Manchin remained a holdout late Monday following a meeting with Biden at the White House, where the two discussed voting rights. The Senator would not say whether he would vote with his party in trying to advance the bill, explaining he was still reviewing the final version. “I have to see the rest of it tonight,” he said at the Capitol.

Manchin proposed his own changes last week as he tried to trim back some areas and expand others, adding provisions for a national voter ID requirement, which is anathema to many Democrats, and dropping a proposed public financing of campaigns.

The proposed Manchin changes were largely well received, welcomed by Biden’s administration as a “step forward,” while earning the nod of approval from one of the party’s key voting rights advocates, former Georgia governor’s race candidate Stacey Abrams.

It did little, however, to garner the bipartisan support Manchin was hoping for. Senate Republicans said they would likely reject any legislation that expands the federal government’s role in elections.

“I keep thinking there’s a few who want to,” Jeff Merkley, an Oregon Democrat who authored the legislation in the Senate, said during a conference call Monday night with the group Our Revolution. “But when McConnell lowered the boom,” he continued, “we couldn’t get a single Republican to join us.”

The rock-solid opposition from the GOP senators brings to a head questions over the filibuster, the decades-old Senate rule that requires 60 votes for most bills to advance.

While some Democrats want to change the Senate’s rules to push the elections bill and other priorities past the filibuster, Manchin and others including Sen. Kyrsten Sinema, an Arizona Democrat, are opposed to taking that next move. Biden, too, has said in the past that he wants to leave the filibuster intact.

“The filibuster compels moderation and helps protect the country from wild swings,” Sinema wrote Monday in an opinion piece for The Washington Post. She welcomed a fulsome debate “so senators and our constituents can hear and fully consider the concerns and consequences.”

Pressure to change the rule is mounting, though. For now, White House press secretary Jen Psaki said the administration’s hope is that the chamber’s 50 Democrats are aligned and that an unsuccessful vote will prompt the search for a new path.

The White House didn’t give its full support to the Manchin alternative. But Psaki said the President “is appreciative of the efforts by Sen. Manchin and others to continue to make progress on voting rights, which he feels is a huge priority.”

Ensuing the bill’s passage is taking on fresh urgency as former President Donald Trump continues to challenge the outcome of the 2020 election and is urging on the new laws in the Republican-led states.

State officials who certified the results of the 2020 election have dismissed Trump’s false claims of voter fraud, and judges across the country have dismissed multiple lawsuits filed by Trump and his allies. Trump’s own attorney general said at the time there was no evidence of widespread fraud that would change the outcome.

The changes being enacted in many of the Republican states are decried by voting rights advocates who argue the restrictions will make it more difficult for people to cast ballots, particularly minority residents in cities who tend to support Democrats.

As the Senate action churns, more changes could be coming to the bill.

Democrats want to protect against intimidation at the polls in the aftermath of the 2020 election. They propose enhancing penalties for those who would threaten or intimidate election workers and creating a “buffer zone” between election workers and poll watchers, among other possible changes.

Rep. John Sarbanes, a Maryland Democrat and a lead sponsor of the bill, said the effort underway is to “respond to the growing threat of election subversion in GOP-led states across the country.“

Democrats also want to limit the ability of state officials to remove a local election official without cause. Georgia Republicans passed a state law earlier this year that gives the GOP-dominated legislature greater influence over a state board that regulates elections and empowers it to remove local election officials deemed to be underperforming.

“The dangers of the voter suppression efforts we’re seeing in Georgia and across the nation are not theoretical, and we can’t allow power-hungry state actors to squeeze the people out of their own democracy by overruling the decisions of local election officials,” said Sen. Raphael Warnock, a Georgia Democrat, who is working to advance the proposal in the Senate.

previousHow does a yo-yo champion plan to take on Marco Rubio? Ken Russell dishes on his U.S. Senate bid