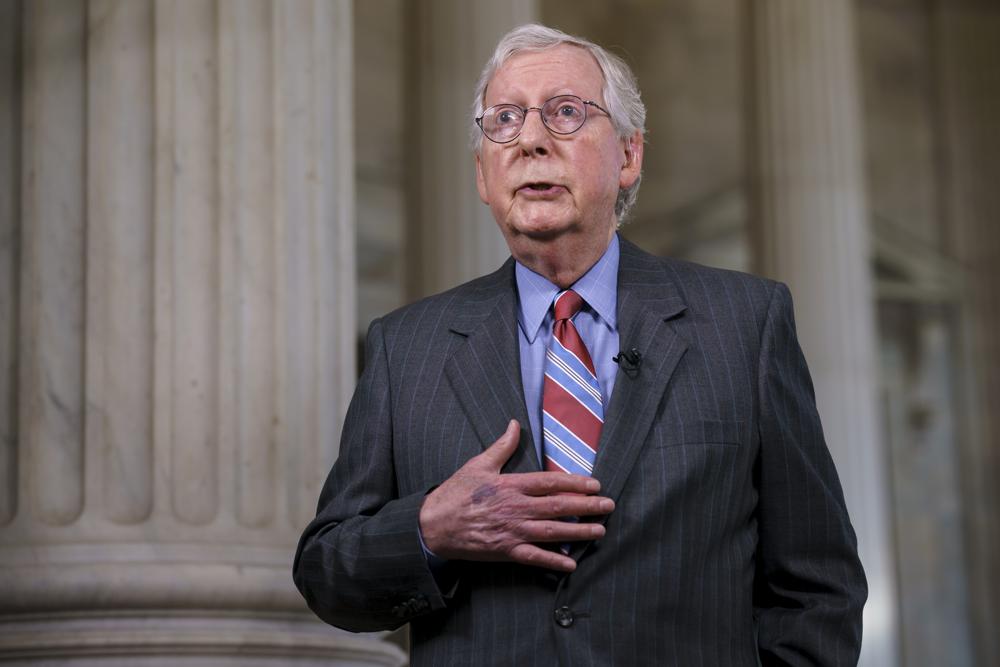 “My hope is that we’ll still get this done. It’s really good for America. Our infrastructure is in bad shape."

President Joe Biden’s bipartisan infrastructure deal has been thrown in doubt as Republican senators said they felt “blindsided” by his insistence that it must move in tandem with his bigger package. The White House doubled down on the strategy, meanwhile, saying it should have come as no surprise.

The rare accord over some $1 trillion in investments faced new uncertainty Friday, barely 24 hours after Biden strode to the White House driveway, flanked by 10 senators from a bipartisan group, with all sides beaming over the compromise.

Senators were described as “stunned,” “floored” and “frustrated” after Biden publicly put the conditions on accepting their deal, according to two people familiar with the private conversations who spoke on condition of anonymity to discuss the reactions.

“I’ve been on the phone with the White House, my Democratic colleagues, my Republican colleagues, all darn day,” said Sen. Rob Portman of Ohio, the lead Republican negotiator, in an interview Friday.

“My hope is that we’ll still get this done. It’s really good for America. Our infrastructure is in bad shape,” he said. “It’s about time to get it done.”

White House press secretary Jen Psaki, who was asked at her briefing about the GOP dismay, said senators should not have been surprised by the two-track strategy that Biden has publicly discussed on many occasions.

“That hasn’t been a secret. He hasn’t said it quietly. He hasn’t even whispered it,” she said.

Psaki said the president plans to stand by the commitment he made to the senators. “And he expects they’ll do the same,” she said.

The path ahead is now uncertain.

Senators launched into calls Friday seeking answers from the White House after a tumultuous past month of on-again, off-again negotiations over Biden’s $4 trillion infrastructure proposals, his top legislative priority.

The Democrats’ two-track strategy has been to consider both the bipartisan deal and their own more sweeping priorities side by side, a way to assure liberal lawmakers the smaller deal won’t be the only one.

But Biden’s vow to essentially veto or refuse to sign the bipartisan accord without the companion package being negotiated by Democrats, which is now eyed at nearly $6 trillion in child care, Medicare and other investments, was an additional step that throws the process into doubt.

“No deal by extortion!” tweeted Sen. Lindsey Graham, on Friday.

Biden reached out Friday to the lead Democratic negotiator, Sen. Kyrsten Sinema of Arizona, and reiterated his strong support for the compromise agreement, according to a readout from the White House.

Tensions appeared to calm later in the day, after senators from the group of negotiators convened a conference call, according to another person who spoke on condition of anonymity to discuss the private meeting.

A bipartisan accord has been important for the White House as it tries to show centrist Democrats including Sinema, Sen. Joe Manchin and others that it is working across the aisle before Biden tries to muscle the broader package through Congress under special budget rules that allow majority passage without the need for GOP votes.

Senate Republican leader Mitch McConnell of Kentucky set the tone for the sudden turn of events, signaling late Thursday where the party was headed.

He framed the argument in a floor speech and a subsequent Fox News interview, declaring that Biden’s messaging from his two news conferences Thursday “makes your head spin.”

McConnell has been highly skeptical of Biden’s agenda, vowing his “100%” focus to defeat it. He is not part of the negotiating team of five Republican and five Democratic senators who have been laboring for months on a potential deal.

Senators who were part of the bipartisan group were initially thrilled at striking the compromise. Many of them spoke about how it would be good not just for rebuilding the nation’s roads and bridges, but also for showing the world that the United States government was functioning well.

Only after senators tuned in later to Biden’s second news conference, where he outlined the path ahead, did frustrations mount and frantic phone calls begin.

At the press conference, Biden was asked what he meant by having the two packages move through Congress to his desk in “tandem.”

Senators from the group were never told of such an explicit linking of the two packages, the two people familiar with the discussions said.

It never came up in their talks with the White House advisers or with Biden himself during Thursday’s meeting of the group of 10 key negotiators, they said.

“There’s a lot of conversations taking place right now as to what the president meant,” said Republican Sen. Bill Cassidy of Louisiana in an interview with a Fox affiliate in New Orleans shared by his office.

Cassidy noted that the president may have misspoken and said he hoped “it won’t be as if we crafted something just to give the president a point of leverage to get something that Republicans disagree with.”

Ten Republican senators would be needed to pass the bipartisan accord in the 50-50 Senate, where 60 votes are required to advance most bills.

While the senators in the bipartisan group are among some of the more independent-minded lawmakers, known for bucking their party’s leadership, it appears McConnell’s criticism of Biden’s approach could peel away Republican support.

The White House insisted that senators have been well aware of the two-bill strategy, which has been openly discussed for months. They all but dared the Republicans to argue their way out of supporting what appeared to be a popular compromise of shared priorities.

“That’s a pretty absurd argument for them to make,” Psaki said. “Good luck.”

Democrats plan to push the broader package through using a special budget process that would allow passage of their own priorities on a simple majority vote of 51 senators, with Vice President Kamala Harris a tiebreaker.

Progressive lawmakers have pushed for the more robust investments and could withhold their votes, as well, on any bipartisan package unless they have guarantees the $1 trillion effort won’t be the end of the road.

previousTaxpayers getting large but unknown benefit from Freedom Week

nextHow Florida is struggling to get aid to tenants