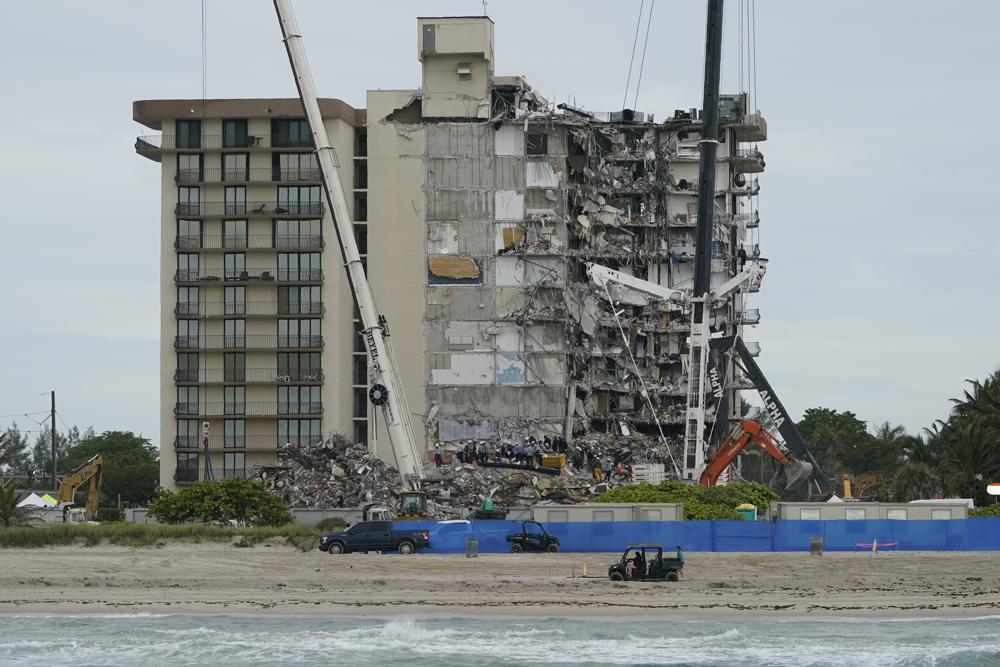 That brings the death toll to 16, including two children.

Search crews going through the ruins of a Surfside condo tower pulled six more bodies from the rubble Wednesday, bringing the number of confirmed dead to 18. It was the highest one-day toll since the building collapsed almost a week ago into a heap of broken concrete.

The number of residents unaccounted stands at 145.

Miami-Dade Mayor Daniella Levine Cava made the announcement at an evening news conference. She said two of the dead were children.

Earlier in the day, crews searching for survivors in the ruins of a collapsed Florida condo tower built a ramp that should allow the use of heavier equipment, potentially accelerating the removal of concrete that “could lead to incredibly good news events,” the state fire marshal said Wednesday.

Since the sudden collapse of the 12-story Champlain Towers South last week in Surfside, rescuers have been working to peel back layers of concrete on the pancaked building without disturbing the unstable pile of debris.

Miami-Dade Assistant Fire Chief Raide Jadallah told family members of those missing Wednesday that a ramp built onto the pile overnight allowed rescuers to use a crane on sections that were not previously accessible. He said that improves the chances of finding new pockets of space in the urgent search for survivors.

“We hope to start seeing some significant improvement in regards to the possibility of (finding) any voids that we cannot see,” Jadallah said.

In an interview with Miami television station WSVN, State Fire Marshal Jimmy Patronis described the ramp as “a Herculean effort” that would allow crews “to leverage massive equipment to remove mass pieces of concrete,” which could lead to good results.

Patronis told The Associated Press that the ramp will allow heavy equipment to get closer to areas where debris needs to be cleared. The new equipment includes a so-called nibbler, a massive machine that has a scissors-like tool at the end of a long arm to cut through concrete and rebar.

Officials have been concerned an underground parking garage could collapse under the weight of heavy equipment, so they decided to build the makeshift limestone ramp, Patronis said. He said dogs are used to check for survivors in the area where the machine works, and then the nibbler is sent in.

“So you can really make some serious rapid headway just because of the sheer hydraulic forces this thing can exert versus a human being with hand tools,” Patronis said.

The cause of the collapse is under investigation. A 2018 engineering report found that the building’s ground-floor pool deck was resting on a concrete slab that had “major structural damage” and needed extensive repairs. The report also found “abundant cracking” of concrete columns, beams and walls in the parking garage.

Just two months before the building came down, the president of its board wrote a letter to residents saying that structural problems identified in the 2018 inspection had “gotten significantly worse” and that major repairs would cost at least $15.5 million. With bids for the work still pending, the building suddenly collapsed last Thursday.

Rescuers still faced enormous obstacles as they spent a seventh day searching for survivors. The pancake collapse of the building has frustrated efforts to reach anyone who may have survived in a pocket of space.

“We’re working collaboratively as a group to try to attain that goal, and that’s to save someone’s life,” Cominsky said Wednesday. “It’s been tough. I just want to emphasize that. We’re still moving forward. We see the resources coming through. We’re exhausting every avenue here.”

Officials were also worried about the possibility of severe weather interfering with search efforts.

Crews have already had to deal with intermittent bad weather that caused temporary delays in the work, and they are now keeping an eye on two disorganized storm systems in the Atlantic Ocean. The National Hurricane Center said the storms have a chance of becoming tropical systems in the coming days, but it is unclear at this point whether they would pose a threat to the U.S.

Gov. Ron DeSantis said some of the resources in Surfside might have to be removed in case the storms hit any part of Florida. “’Tis the season and you’ve got to be ready,” he said.

The possibility of severe weather prompted state officials to ask the federal government for an additional search and rescue team. Kevin Guthrie of the Florida Division of Emergency Management said the new team, which would likely come from Virginia, would be on hand if severe weather hits, allowing crews that have been working at the site for days to rotate out.

Authorities said it’s still a search-and-rescue operation, but no one has been found alive since hours after the collapse on Thursday.

“They want to thank the heroic first responders, search-and-rescue teams and everyone who’s been working tirelessly around the clock, and meet with the families” waiting for word of their loved ones, White House press secretary Jen Psaki said Tuesday.

Jadallah told family members Wednesday that if they want to meet with Biden, they should respond through an RSVP form from police and fire officials.

Miami-Dade Police Director Freddy Ramirez said he hopes Biden’s visit will be a morale booster for the devastated community.

“We’ve had several challenges from weather, sorrow, pain. And I think that the president coming will bring some unity here for our community, support, like our Governor, our Mayor, all of us together.”