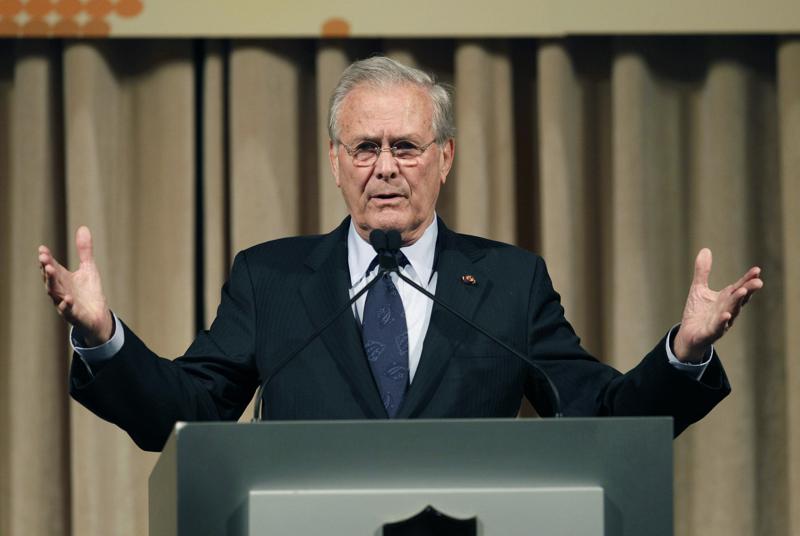 Mike Waltz was among those who mourned the Defense Secretary's death.

Calling Donald H. Rumsfeld energetic was like calling the Pacific wide. When others would rest, he would run. While others sat, he stood. But try as he might, at the pinnacle of his career as defense secretary he could not outmaneuver the ruinous politics of the Iraq war.

Regarded by former colleagues as equally smart and combative, patriotic and politically cunning, Rumsfeld had a storied career in government under four presidents and nearly a quarter century in corporate America. After retiring in 2008 he headed the Rumsfeld Foundation to promote public service and to work with charities that provide services and support for military families and wounded veterans.

The two-time defense secretary and one-time presidential candidate died Tuesday. He was 88.

“America will never forget its Secretary of Defense who ran to the burning Pentagon on September 11th to help others in need,” Waltz said. “Donald Rumsfeld was a patriot who served his country in uniform, in the halls of Congress, as U.S. Ambassador to NATO, White House Chief of Staff, and as Secretary of Defense under two administrations. I take great pride in having worked as a policy advisor for Afghanistan in the Pentagon under his leadership. He was dedicated to ensuring our military was ready in times of peace and keeping our country safe in times of war. Rest in Peace.”

“Rummy,” as he was often called, was ambitious, witty, engaging and capable of great personal warmth. But he irritated many with his confrontational style. A man seemingly always in a hurry, he would let loose with a daily flurry of memos to aides — some well down the bureaucratic chain — which he dictated into an audio recorder and were typed up by assistant. They became known as his “snowflakes.”

An accomplished wrestler in college, Rumsfeld relished verbal sparring and elevated it to an art form; a biting humor was a favorite weapon.

Still, he built a network of loyalists who admired his work ethic, intelligence and impatience with all who failed to share his sense of urgency.

From his earliest years in Washington he was seen by friend and foe alike as a formidable political force. An associate of President Richard Nixon, Bryce Harlow, who helped persuade Rumsfeld to resign from Congress and join the Nixon Cabinet as director of the Office of Economic Opportunity in 1969, called him “rough and ready, willing to tangle” and “the kind of guy who would walk on a blue flame to get a job done.”

He made a brief run for the 1988 Republican presidential nomination, a spectacular flop that he once described as humbling for a man used to success at the highest levels of the government, including stints as White House chief of staff, U.S. ambassador and member of Congress.

For all Rumsfeld’s achievements, it was the setbacks in Iraq in the twilight of his career that will likely etch the most vivid features of his legacy.

By the time he arrived at the Pentagon in January 2001 for his second stint as defense secretary, the military that Rumsfeld inherited was in a slow-motion transition from the Cold War era to a period dominated by ethnic conflicts in the Balkans, humanitarian crises in the Horn of Africa and spasms of terrorism. Among the other prominent worries: China’s military buildup and the nuclear ambitions of Iran and North Korea.

But nine months into his tenure, on Sept. 11, Rumsfeld found himself literally face-to-face with the threat that would consume the remaining years of his tenure. When a hijacked American Airlines jetliner slammed into the Pentagon, Rumsfeld was in his third-floor office meeting with nine House members. He later recalled that at the instant of impact, the small wood table at which they were working trembled.

Rumsfeld was among the first to reach the smoldering crash site, and he helped carry the wounded in stretchers before returning to his duties inside the building.

The nation suddenly was at war. U.S. forces invaded Afghanistan on Oct. 7, and with Rumsfeld at the Pentagon helm the Taliban regime was toppled within weeks. Frequently presiding at televised briefings on the war, Rumsfeld became something of a TV star, admired for his plain-spokenness.

Within months of that success, President George W. Bush’s attention shifted to Iraq, which played no role in the Sept. 11 attacks. Rumsfeld and others in the administration asserted that Iraqi President Saddam Hussein was armed with nuclear, biological or chemical weapons, and that the U.S. could not afford the risk of Saddam one day providing some of those arms to al-Qaida or other terrorist groups.

The U.S.-led invasion of Iraq was launched in March 2003 with a go-ahead from Congress but no authorization by the U.N. Security Council. Baghdad fell quickly, but U.S. and allied forces soon became consumed with a violent insurgency. Critics faulted Rumsfeld for dismissing the public assessment of the Army’s top general, Eric Shinseki, that several hundred thousand allied troops would be needed to stabilize Iraq.

Square-jawed with an acid tongue, Rumsfeld grew combative in defense of the war effort and became the lightning rod for Democrats’ criticism. Years afterward, the degree of blame that should be shared among the White House, Rumsfeld and the U.S. military for the disasters in Iraq remained in debate.

In his 2009 biography of Rumsfeld, author Bradley Graham wrote that it was “both incorrect and unfair to heap singular blame” on Rumsfeld for Iraq.

“But much of what befell Rumsfeld resulted from his own behavior,” Graham wrote in “By His Own Rules.” “He is apt to be remembered as much for how he did things as for what he did. And here, too, he was an internal contradiction. Capable of genuine charm, kindness and grace, he all too frequently came across as brusque and domineering, often alienating others and making enemies where he needed friends.”

In his 2011 memoir, “Known and Unknown,” Rumsfeld offered no hint of regret about Iraq, but acknowledged that its future remained in doubt.

“While the road not traveled always looks smoother, the cold reality of a Hussein regime in Baghdad most likely would mean a Middle East far more perilous than it is today,” he wrote. He sounded unconvinced that the failure to find WMD in Iraq poked a hole in the justification for invading.

“Our failure to confront Iraq would have sent a message to other nations that neither America nor any other nation was willing to stand in the way of their support for terrorism and pursuit of weapons of mass destruction,” he wrote.

Rumsfeld twice offered his resignation to Bush in 2004 amid disclosures that U.S. troops had abused detainees at Iraq’s Abu Ghraib prison — an episode he later referred to as his darkest hour as defense secretary.

Not until November 2006, after Democrats gained control of Congress by riding a wave of antiwar sentiment, did Bush finally decide Rumsfeld had to go. He left office in December, replaced by another Republican, Robert Gates. Defiant to the end, Rumsfeld expressed no regrets in his farewell ceremony, at which point the U.S. death toll in Iraq had surpassed 2,900. The count would eventually exceed 4,400.

“It may well be comforting to some to consider graceful exits from the agonies and, indeed, the ugliness of combat,” he told his colleagues. “But the enemy thinks differently.”

Born in Chicago as the second child of George and Jeannette Rumsfeld, Rumsfeld wrote in his memoir that he and his father shared a favorite sports team: the Chicago Bears of the National Football League. He recalled that while listening to a Bears game on the radio at home one Sunday in 1941, the announcer interrupted the broadcast to announce that Japanese airplanes had launched a surprise attack on Hawaii.

“I could feel that something terrible had happened,” he wrote. “I saw it in my parents’ faces and heard it in the tense voices reporting the news of the attack.”

After Pearl Harbor, Rumsfeld’s father joined the Navy at age 38 and the family moved frequently to be near him on the West Coast.

In high school he met his future wife, Joyce Pierson. He entered Princeton on a partial scholarship and joined the campus Navy ROTC program to cover his other expenses. In June 1954, Rumsfeld graduated and was commissioned an ensign in the Navy. Six months later he married Joyce.

He launched his Washington career in 1957 by signing up as an assistant to Rep. Dave Dennison, an Ohio Republican. Soon he was serving as a congressman himself, first elected to represent Illinois in 1962. He served four terms.

One of his early acts as a member of the Nixon White House was to hire a young Dick Cheney, starting a lifelong friendship.

Rumsfeld was working as the U.S. ambassador to NATO in Brussels, Belgium, when he was recalled to Washington to lead President Gerald Ford’s transition team after Nixon resigned in August 1974. He became the new president’s chief of staff and then, in November 1975, his defense secretary.

After leaving the Pentagon in 1977, Rumsfeld embarked on a successful business career in the private sector, including as chief executive officer, president and then chairman of G.D. Searle & Co., a major prescription drug manufacturer.

He still dabbled in government service, including serving as a special envoy to the Middle East for President Ronald Reagan in 1983-84. It was in that capacity that he famously met in Baghdad in December 1983 with Saddam, whose nation at the time was at war with Iran.

“None of us in the Reagan administration bore any illusions about Saddam,” Rumsfeld wrote in his memoir. “Like most despots, his career was forged in conflict and hardened by bloodshed. He had used chemical toxins in the war he initiated with Iran three years earlier. But given the reality of the Middle East, then as now, America often had to deal with rulers who were deemed ‘less bad’ than the others.”

Two decades later, Rumsfeld was again dealing with Saddam — this time overseeing an invasion that toppled the tyrant and led, ironically, to Rumsfeld’s own downfall.

He is survived by his wife, Joyce, three children and grandchildren.