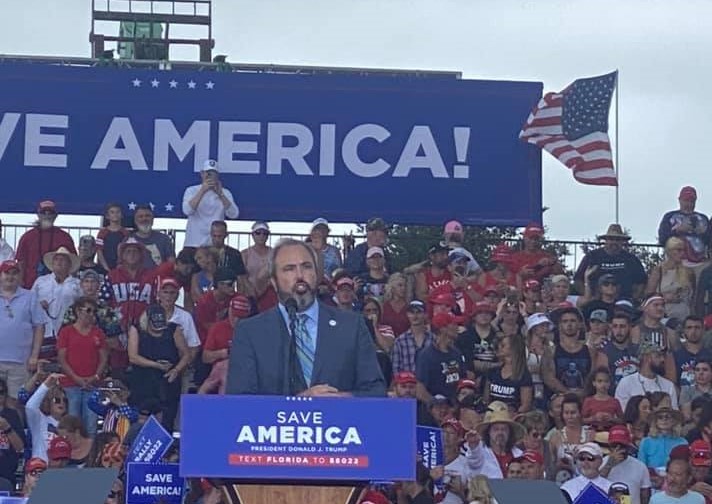 'Joe has done a fantastic job. Thank you very much.'

When former President Donald Trump held his first rally in Florida since his election loss, he chose Sarasota. That’s the hometown of Republican Party of Florida Chair Joe Gruters, who received a special shoutout from the stage.

Gruters, also a state Senator, gained statewide prominence after endorsing Trump early and co-chairing the Florida arm of then-candidate Trump’s 2016 campaign. Because of that, the Florida headquarters was set up not in a Miami or Orlando, but in Sarasota.

After Trump’s surprise 2016 victory, Gruters was elected in 2018 as chair of the Republican Party of Florida, and was reelected last year. So he was excited to pick up the mention from the stage.

“I was on cloud nine after he mentioned me and I always go back to all interactions that I have had with him over the years and am glad he picked Sarasota as his first kickoff rally here in Florida,” Gruters said.

Trump lost in 2020, though at the rally also repeated false assertions he actually beat now-President Joe Biden in November. But he did win Florida by 3 percentage points last year, and referenced that in his speech, largely crediting Gruters’ leadership of the state party.

“A lot of people in the Republican Party, they fought like hell in this election. A lot of hearts, because the money that was spent was unprecedented,” he said. “And we won easily. We won by a lot, by a record, and I just want to thank them all — the people from Congress and the people from the Republican Party. What a job and thank you very much.

When Gruters led the Republican Party of Sarasota, the county party twice gave Trump the Statesman of the Year award before he was elected President. Trump also mentioned that in the speech.

“He (Gruters) gave it to me during (Mitt) Romney’s convention, because he probably knew where Romney was going and that wasn’t to a victory,” Trump said.

“Joe has done a fantastic job. Thank you very much.”

Gruters gave a warm-up speech before Trump took the stage, and at one point led chants of Trump 2024. He said it’s clear that even now, Trump sets the agenda for the Republican Party.

“He is the leader of the American First movement and there is no doubt that he still has the support and structure to win again,” Gruters said.

previousJoe Biden: U.S. ‘coming back together,’ but COVID-19 not yet finished

nextCOVID-19 not done with Northeast Florida