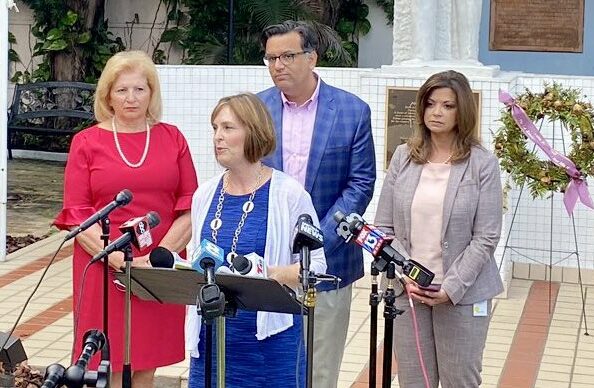 U.S. Rep. Kathy Castor is joining the chorus of support for Cuban protesters, rallying with Tampa Democrats Wednesday in solidarity with one of the largest anti-government demonstrations Cuba has seen in decades.

“We are inspired by the protests of the people in Cuba and here in Tampa, for freedom on the island of Cuba,” Castor said. “We are united in our support for the Cuban people.”

Castor continued, calling for a peaceful transfer of power in Cuba.

“Under the Díaz-Canel and the communist regime there, they have failed their people,” Castor said. “Today I am calling for peaceful transfer of power on the island of Cuba.”

Cruz went on to explain this current movement as a turning point in the fight for liberation, with Cubans risking their lives to protest the government.

“The outrage here is not new. Cubans have been tired for decades, but this movement right now is absolutely historical,” Cruz said. “Enough is enough, the people of Cuba have spoken, they’re willing to die to fight for their rights and the future of their country.”

Millan, the daughter of Cuban immigrants, emphasized her personal relationship to the crisis, with family members living under the communist regime.

“Right now they have access to nothing. When I say that I, I can’t stress enough the dire need for basic necessities,” she said. “The courage that it takes to protest and be out there when they don’t have any weapon. They’re using rocks and using their hands and fists to fight to overcome something that has taken over their lives for over 60 years. I stand in solidarity with my people and I wish for a free Cuba, as soon as possible.”

Around Tampa, people rallying in support of the Cuban protestors have continued to flood the streets, shutting down traffic in some instances. Local political leaders have joined the rallies, including Cruz and Viera.

Viera, who is the son of Cuban refugees, announced he will be offering a resolution to Tampa City Council on Thursday calling for unity among the city in support of the Cuban people.

“We are a diverse city, and we’re a city — like I always say — that stands with refugees,” he said. “I was proud to offer, it’ll be voted on tomorrow, Thursday, a resolution to have the City Council and the city of Tampa stand, without equivocation, without hesitation and with full moral clarity, behind liberty and freedom for the people of Cuba right now.”