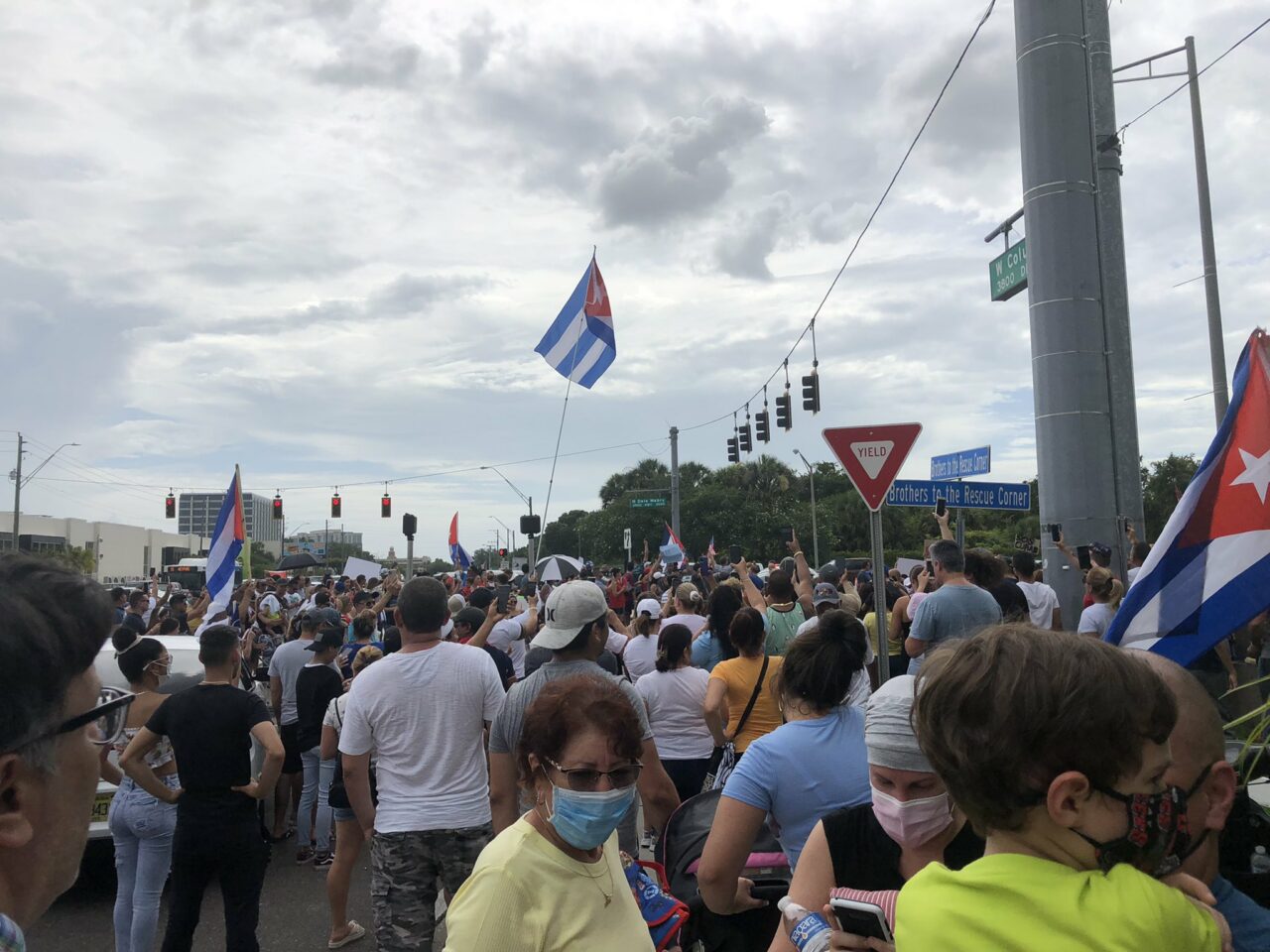 Hundreds gathered in West Tampa Sunday afternoon to show support for protesters in Cuba who took to the streets earlier that day in one of the largest anti-government demonstrations the country has seen in decades.

To show solidarity, a couple of hundred people flooded streets across West Tampa near Raymond James Stadium, waving Cuban flags and blasting Reggaeton in a parade of celebration and hope. The crowd was concentrated around Columbus Drive and Dale Mabry Highway, as well as Himes Avenue  near MLK Boulevard.

The Tampa rally lasted into the night, with police shutting down nearby streets. The crowd dispersed by about 10 p.m.

Local political leaders have also shared support and hope amid the protests. Tampa City Council member Luis Viera, who is the son of Cuban refugees, joined the celebrations in Tampa, describing the mood as “passionate.”

Here in West Tampa to stand in solidarity with Cubans protesting 90 miles from Florida for liberty, food & COVID vaccinations. I’m a proud son of Cuban refugees & am proud to use my voice to support change in Cuba. #SOSCuba #ProudCubanAmerican 🇨🇺🇺🇸 pic.twitter.com/gHyxnlrYWr

“It was very emotional and passionate,” Viera told Florida Politics. “This is a rally that functions, frankly, as a prayer by many Cuban Americans, and the allies of freedom in Cuba here in Tampa. A prayer for liberty, a prayer for democracy.”

“I think that the message people are trying to send to Cuba is that we stand with you. We stand with people who want to be in control of their own destiny,” he added. “The main issue is self-determination. Everyday Cubans want to be in the driver’s seat on the determination of their country — a right that has not been given to them in a very, very long time.”

Viera also added that the message extended to those across the Tampa Bay area, especially as a home to many refugees.

“Tampa’s home to many refugees,” he said. “I know refugees stand with one another, so there are many, many people who feel passionate about this issue, even though they’re not Cuban refugees or Cuban exiles.”

“We must support the brave men and women in Cuba, who are risking their lives in order to stand up to the oppressive regime. I stand by them and their relentless fight for the freedom they deserve,” she posted Monday morning.

We must support the brave men and women in Cuba, who are risking their lives in order to stand up to the oppressive regime. I stand by them and their relentless fight for the freedom they deserve. #SOSCuba #CubaLibre