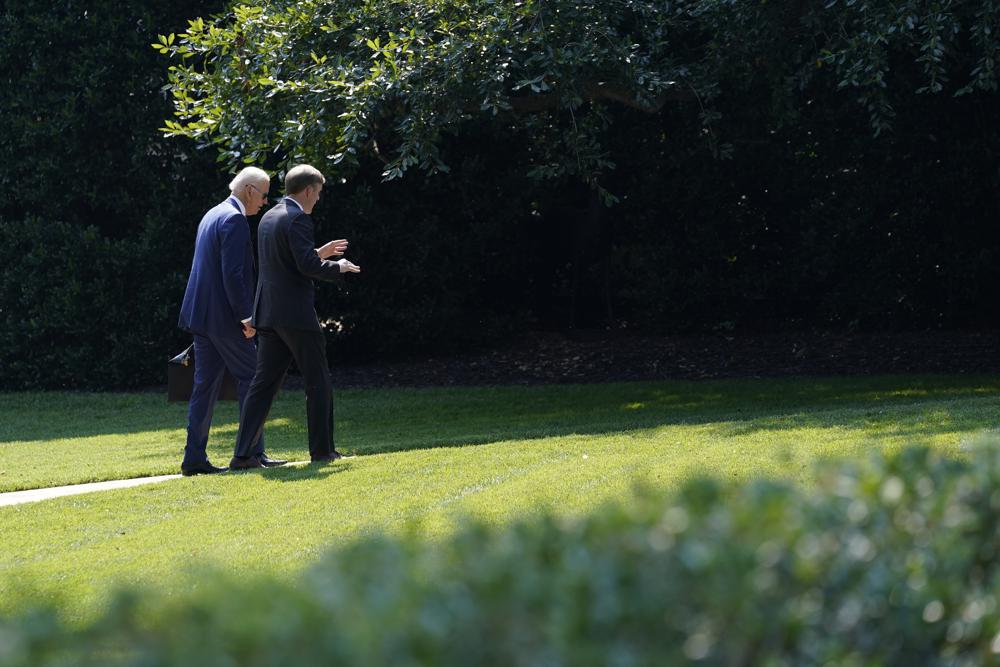 President Joe Biden’s latest leap into the Senate’s up-and-down efforts to clinch a bipartisan $1 trillion infrastructure deal comes with even more at stake than his coveted plans for boosting road, rail and other public works projects.

The outcome of the infrastructure bargaining, which for weeks has encountered one snag after another, will impact what could be the crown jewel of his legacy. That would be his hopes for a subsequent $3.5 trillion federal infusion for families’ education and health care costs, a Medicare expansion and efforts to curb climate change.

Biden and Senate Majority Leader Chuck Schumer, a New York Democrat, will need support from every Democratic moderate and progressive to push the $3.5-trillion bill through the 50-50 Senate, with Vice President Kamala Harris’ tie-breaking vote. If the infrastructure talks implode, it may be harder for moderates — who rank its projects as their top priority — to back the follow-up $3.5 trillion plan, which is already making them wince because of its price tag and likely tax boosts on the wealthy and corporations.

“I would say that if the bipartisan infrastructure bill falls apart, everything falls apart,” West Virginia Sen. Joe Manchin, one of his chamber’s most conservative Democrats, warned reporters this week.

That could well prove an overstatement, since moderates like him will face enormous pressure from Biden, Schumer and others to back the $3.5 trillion package, whatever the bipartisan plan’s fate. But it illustrates a balancing act between centrists and progressives that top Democrats must confront.

“If infrastructure collapses, which I hope it does not, you’d have the difficulty of holding some of the Democrats” to back the $3.5 trillion bill, No. 2 House leader Steny Hoyer, a Maryland Democrat, said Tuesday in a brief interview. Party leaders will be able to lose no more than three Democrats to prevail in the 435-member House.

Both sides in the talks were expressing renewed optimism Tuesday about prospects for a deal, a view they’ve expressed before without producing results. The uncertainty underscored that Democrats were at a promising yet precarious point for their agenda, with stakes that seem too big for them to fail yet failure still possible.

Biden met at the White House on Tuesday with Sen. Kyrsten Sinema of Arizona, a leader of moderate Democrats who’ve been laboring to strike an infrastructure deal with GOP senators. The President also used several tweets to prod lawmakers, including one saying, “There are no Democratic roads or Republican bridges — infrastructure impacts us all and I believe we’ve got to come together to find solutions.”

White House press secretary Jen Psaki said Biden and Sinema “are very much aligned on the path forward” and expressed optimism, but also said the president was “not setting new deadlines” for a deal. Several target dates for reaching an agreement have come and gone, though Schumer wants a Senate vote on a package before sending lawmakers home for an August recess.

Sinema is a centrist who’s alienated some Democrats who consider her unpredictable.

Illustrating that, Rep. Peter DeFazio, an Oregon Democrat, told House Democrats privately Tuesday that the infrastructure accord senators are trying to complete is “crap,” according to two people who attended the session and described it on condition of anonymity. He also said the measure was being crafted by “three Republicans,” pointedly naming Sens. Rob Portman, an Ohio Republican, Susan Collins, a Maine Republican, and Sinema, they said.

Moderate Democrats have long made an infrastructure deal their top priority. The bipartisanship such an accord would display plus the meat-and-potatoes spending it would bring back home have made that their goal over the separate $3.5 trillion measure for family and environmental programs.

If the infrastructure talks fail, it would deprive moderates of a victory that if reached might leave them more open to making concessions on the $3.5 trillion measure. A collapse could also trigger fresh internal Democratic fighting over how much of the infrastructure spending would be transferred to the huge domestic spending plan, and how that would affect its overall price tag.

Even Republicans are divided over the infrastructure measure and what a failure of the bipartisan talks would mean as both parties eye 2022 elections in which House and Senate control are fully in play.

Some Republicans worry that approval of a bipartisan infrastructure plan would help Democrats pass their $3.5 trillion measure by making moderate Democrats more prone to cooperate with their colleagues on that subsequent, costlier legislation.

They also say supporting the infrastructure measure would let Democrats rope the GOP into sharing the blame if inflation or other economic problems take hold amid massive federal spending programs.

But others say that since Republicans won’t be able to stop Democrats from passing their $3.5 trillion bill, the GOP might as well back an infrastructure agreement. That would let Republicans haul a share of its $1 trillion in popular projects back to their home states.

Democrats plan to use special budget rules that would prevent Republicans from using a filibuster — a delay that takes 60 Senate votes to halt — to derail the $3.5 trillion measure.

These Republicans also say passage of the infrastructure measure would make it harder for Manchin and Sinema — and moderate Democrats facing reelection in swing states, like New Hampshire’s Maggie Hassan and Arizona’s Mark Kelly — to vote for an even larger $3.5-trillion plan.

“I think it puts their members more on the defensive and having to defend very, in my view, indefensible spending and taxing,” said No. 2 Senate GOP leader John Thune of South Dakota.