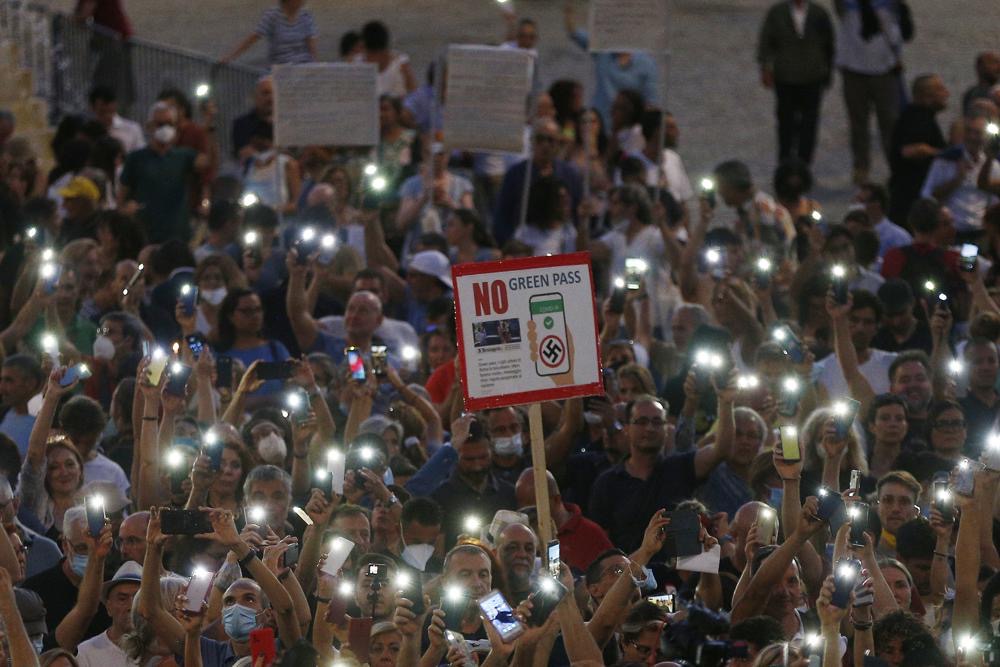 Protests throughout the continent.

Shouts of “Liberty!” have echoed through the streets and squares of Italy and France as thousands show their opposition to plans to require vaccination cards for normal social activities, such as dining indoors at restaurants, visiting museums or cheering in sports stadiums.

Leaders in both countries see the cards, dubbed the “Green Pass” in Italy and the “health pass” in France, as necessary to boost vaccination rates and persuade the undecided.

Italian Premier Mario Draghi likened the anti-vaccination message from some political leaders to “an appeal to die.”

The looming requirement is working, with vaccination requests booming in both countries.

Still, there are pockets of resistance by those who see it as a violation of civil liberties or have concerns about vaccine safety. About 80,000 people protested in cities across Italy last weekend, while thousands have marched in Paris for the past three weekends, at times clashing with police.

European nations in general have made strides in their vaccination rates in recent months, with or without incentives. No country has made the shots mandatory, and campaigns to persuade the undecided are a patchwork.

Denmark pioneered vaccine passes with little resistance. Belgium will require a vaccine certificate to attend outdoor events with more than 1,500 people by mid-August and indoor events by September. Germany and Britain have so far resisted a blanket approach, while vaccinations are so popular in Spain that incentives are not deemed necessary.

In France and Italy, demonstrations against vaccine passes or virus restrictions in general are bringing together otherwise unlikely allies, often from the political extremes. They include far-right parties, campaigners for economic justice, families with small children, those against vaccines and those who fear them.

Some protesters in Italy and France have worn yellow Stars of David, like those the Nazis required Jews to wear during World War II.

Holocaust survivors call the comparison a distortion of history.

“They are madness, gestures in poor taste that intersect with ignorance,” said Liliana Segre, a 90-year-old Holocaust survivor and Italian senator for life. “It is such a time of ignorance, of violence that is not even repressed any more, that has become ripe for these distortions.”

Similar comparisons during protests in Britain have been widely condemned. One of the most prominent anti-lockdown activists, Piers Corbyn, brother of former Labour Party leader Jeremy Corbyn, was arrested earlier this year after distributing a leaflet making the comparison, depicting the Auschwitz concentration camp.

The French health pass is required at museums, movie theaters and tourist sites, and comes into effect for restaurants and trains on Aug. 9. To get it, people must be fully vaccinated, have a recent negative test, or proof they recently recovered from COVID-19.

Italy’s requirements are less stringent. Just one vaccine dose is required, and it applies to outdoor dining, cinemas, stadiums, museums and other gathering places from Aug. 6. Expanding the requirement to long-distance transport is being considered. A negative test within 48 hours or proof of having recovered from the virus in the last six months also provide access.