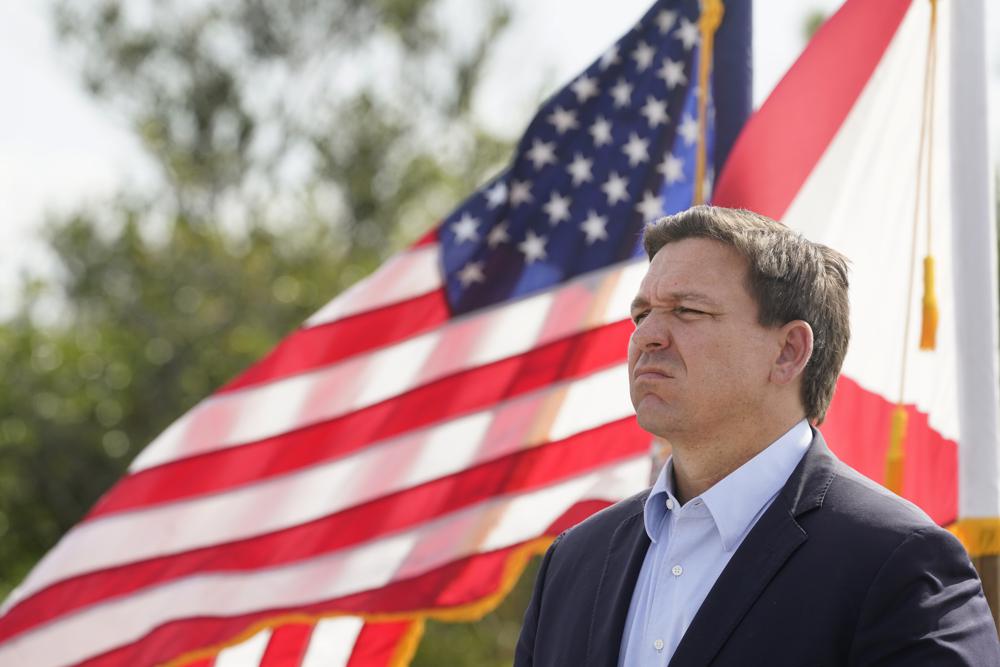 It didn’t take much for the White House to set Gov. Ron DeSantis off. As coronavirus cases rise across the Sun Belt, President Joe Biden asked GOP governors to “get out of the way” of efforts to contain the virus.

DeSantis fired back that he did not want to “hear a blip about COVID from you, thank you,” adding, “Why don’t you do your job?”

The exchange was unusually direct and bitter, particularly for politicians dealing with a crisis that is killing Americans in rising numbers. But it was a sign that the now-familiar cudgels of virus politics — debates pitting “freedoms” against masks and restrictions — remain potent weapons. And DeSantis, in particular, appears eager to carry that fight into next year’s midterms election, and beyond.

“He has become, I would argue, the leading voice of opposition to the Biden administration,” said Rob Bradley, a Republican who recently left the Florida Senate because of term limits. “It’s not a surprise to see Biden and DeSantis going at it.”

The strategy comes with risks. DeSantis is up for reelection next year and is frequently mentioned as a 2024 presidential contender. His national profile has risen in large part because he spent the early part of the pandemic pushing a message that prioritized his state’s economy over sweeping restrictions to stop the spread of the coronavirus.

But his state is now an epicenter of the latest surge. Florida has repeatedly broken records for hospitalized patients this week, and it and Texas accounted for a third of all new cases nationwide last week, according to the White House.

DeSantis has responded by banning mask mandates in schools and arguing that vaccines are the best way to fight the virus while new restrictions amount to impediments on liberty.

“Florida is a free state, and we will empower our people,” DeSantis said in a fundraising email keying off his hitting back at the President. “We will not allow Joe Biden and his bureaucratic flunkies to come in and commandeer the rights and freedoms of Floridians.”

Biden’s willingness to call out the Republican governor of Florida — as well as his colleagues in other hot spots like Texas — marks a new confrontational turn for him as well. For months, the White House has tried to minimize the perception of distance between the President and governors in hopes of depoliticizing the vaccination process.

It had sought to prevent a nationwide panic over the spread of the delta variant and to make good on the promise that the nation was ready to move past the pandemic. But with new cases averaging more than 70,000 a day — above the peak last summer before vaccines were available — the messaging has shifted.

The White House is now casting what’s occurring as a more localized concern primarily affecting areas of the country that have lagging vaccination rates and that have not followed federal guidance recommending face masks in areas with high case rates. But the hardest-hit areas tend to be run by Republicans like DeSantis.

Biden is proving more reticent than DeSantis to continue the feud. When asked Thursday about DeSantis’ response to his comments, Biden simply asked, “Governor who?” and grinned.

Still, that didn’t stop White House press secretary Jen Psaki from turning up the administration’s criticism, saying it was a “fact” that DeSantis “has taken steps that are counter to public health recommendations.”

“Frankly, this is too serious, deadly serious, to be doing partisan name calling,” Psaki said.

She added that administration officials remained in touch with Florida’s public health officials, despite DeSantis’ posture. Psaki also said the White House was focused on ensuring Floridians know what steps they should be taking to safeguard their health, “even if those are not steps taken at the top of the leadership in that state.”

Republican governors attacking Democratic presidents and vice versa is nothing new, meanwhile. And even heated partisan back-and-forth as the coronavirus rages has happened before.

During the early months of the pandemic last year, New York Gov. Andrew Cuomo’s daily press briefings were carried live on national television and cheered by Democrats across the country as a science-based antidote to then-President Donald Trump’s own daily sessions with the media.

One day when Cuomo was holding his briefing, Trump tweeted that the New York governor was doing too much “complaining” and should “get out there and get the job done. Stop talking.” Cuomo was asked about that and shot back, “If he’s sitting home watching TV, maybe he should get up and go to work.”

Cuomo is now under intense pressure to resign after an investigation found he sexually harassed nearly a dozen women and worked to retaliate against one of his accusers. But his state is no longer the virus hot spot that Florida is.

Another indication that the back-and-forth between Biden and DeSantis could foreshadow similar future clashes as the midterms loom is that the governor and President recently put aside their differences and appeared together after the deadly collapse of a condo building in Surfside. That’s a far cry from what’s happening now.

“He’s only telling us what he’s against,” Bernard Ashby, a Miami cardiologist who leads the Florida chapter of the Committee to Protect Health Care, said of DeSantis. “I think it’s up to him, as leader of our state, to actually do something to decrease the amount of people that we see getting infected, hospitalized, ending up in the ICU and ultimately dying.”

DeSantis is nonetheless doubling down. His harsh words for Biden have already caused a stir in conservative online circles, and the Governor has since appeared on Fox News to reiterate them.

“That’s been his strategy his entire existence … whatever plays on Fox News is where he’s going,” said Kevin Cate, a Florida-based Democratic strategist and veteran of Barack Obama’s 2008 presidential campaign.

Cate, a campaign consultant for Agriculture Commissioner Nikki Fried, who is running for Governor and has been an outspoken DeSantis critic, said if the Florida loss of life now occurring because of the coronavirus had been a hurricane, the governor would have “suited up” for disaster response without worrying about the political optics.

“If Ron DeSantis had one-tenth of the vitriol against the virus that he spews about Joe Biden,” he said, “people would not be dying in Florida.”

nextUnited Airlines will require US employees to be vaccinated