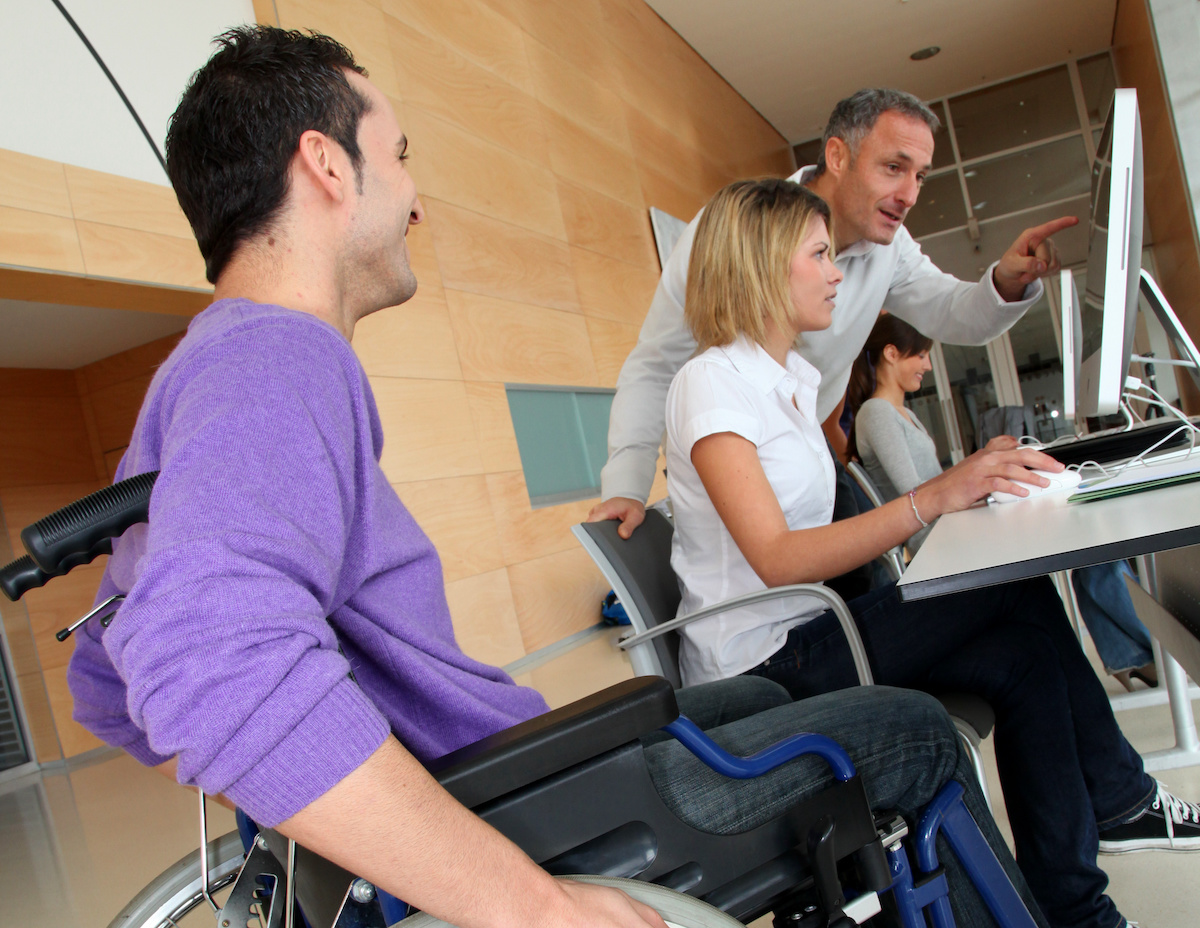 As the pandemic stretches into a third school year, learning loss is becoming more severe.

But last year was less a “COVID slide” than a COVID-19 deacceleration — the average student did learn something last year, just less than they would have in a non-pandemic year.

The calculus is different for minority, low-income or disabled students, many of whom were already struggling to keep pace before coronavirus upended everything. For them, 2020-21 was essentially a gap year.

Though VR has existed for decades, the modern incarnation was created in 2014 when Congress passed the Workforce Innovation and Opportunity Act, or WIOA, as a successor to the Workforce Investment Act, which had been in place since the late 1980s.

WIOA’s landmark feature requires states to provide VR programs to help mentally or physically disabled individuals aged 14-21 ready themselves for a job or postsecondary education. Without instruction and professional development, many of the students and young adults served by VR would face near-insurmountable barriers to employment.

Yet many students who meet VR’s eligibility requirements have been left out because labyrinthine application process that has as many variations as there are school districts.

Those who manage to navigate it may not receive services anyway due to chronic understaffing at Vocational Rehabilitation offices.

During an Aug. 10 meeting of the Florida Rehabilitation Council, the body that oversees the VR program, an agency representative said the Division of Vocational Rehabilitation had a 22.6% job vacancy rate during the fiscal year that ended June 30. That equates to about 200 empty jobs out of the 894 positions funded in the 2020-21 state budget.

Understaffing has placed an unsustainable burden on the employees who remain on the job — during the same meeting, it was disclosed that one case manager was handling 246 cases on their own. Division representatives said that employee is an outlier and Florida VR counselors generally have a smaller caseload than their counterparts in other states.

According to survey results published by the Division, 81% of VR customers were satisfied with Florida’s VR program and the services they received last fiscal year. But the same survey also showed that nearly a quarter ran into a problem.

The most common complaints all link back to high vacancy rates — 15% said their counselor did not return calls and emails; 15% said they had to leave multiple messages before getting a call back; 14% said they received voicemails but that their counselor never picked up the phone when they called back, and 11% said they experienced some other communication snag.

Adding to the frustration, VR participants who jump through all the hoops in the application process and are assigned to an attentive counselor could find that their county has few, if any, vendors offering the types of instruction they need. About 19% of VR customers said the agency wasn’t able to help them, and 10% said they lived too far away to access services.

Florida is not the only state that where post-WIOA vocational rehabilitation has had a rocky rollout. Hundreds of thousands of disabled individuals who are eligible for VR services have fallen through the cracks.

But Florida’s problems are more numerous than most other states and not caused by a lack of resources. Since the law’s inception, the state has sent millions of dollars back to the federal government each year.

VR is not an optional program — states face an obligation to provide these services, which include everything from job training to accessibility equipment, hearing aids, and screen magnifiers.

The law mandates that each state sets aside a portion of federal funding for services. Still, the funding they receive is subject to sequestration, a budgeting term meaning whatever money the state doesn’t use must be sent back to the federal government.

It costs between $2,000 and $3,000 to serve a typical student in the program, meaning the money Florida sent back last year could have allowed thousands more Floridians to receive the help they are entitled to under the law.

The impact could become more severe in the future.

While sequestration means that VR funding is ‘use it or lose it,’ it also impacts how much money state VR agencies receive in the future. The law pegs each state’s VR budget to the total funding it received in the prior year, less the money returned and adjusted for inflation.

Every year Florida fails to spend the VR money it receives providing services to disabled residents, the less money it will have to serve students next year.

What money Florida’s VR system does manage to spend is not spent effectively. The federal Rehabilitation Services Administration found Florida’s program lagging in many crucial areas, including job placements. In 2016, just 21% of disabled youth served by Florida’s VR program exited the system with a job, putting the state double digits below the national average.

RSA’s report also highlighted the plodding pace in issuing eligibility determinations. In 2016, one in three applicants waited more than 60 days to hear whether they qualified for services, about double the nationwide rate.

The longer wait time is due in part to bureaucracy. Despite federal rules governing the process, FDVR doesn’t start the 60-day clock for application processing until a supervisor signs off on the applicant’s supporting documentation. In some cases, RSA found it took more than a month for a supervisor to give the OK.

RSA noted several other problems in the report, but most can be attributed to a lack of uniformity between FDVR’s seven regional subdivisions, the largest of which covers more than 20 counties across Northwest Florida.

Some regions use an online portal; others don’t. Some allow parental consent to be given over the phone; others require parents to attend one or even two in-person meetings with the counselor.

The separate processes make it difficult for VR customers and parents, but for vendors, it is untenable. Many large organizations with the ability to provide VR services at scale don’t bother because they need to account for too many variables. As a result, the VR system mostly relies on single-district providers, and some smaller counties don’t have any providers at all.

The services provided by FDVR have always been in demand, but the pandemic has raised the stakes. At the same time, program oversight is at an all-time low.

Federal law requires boards that oversee vocational rehabilitation programs to have at least 15 members with further requirements to ensure the various populations VR serves are represented on the panel. Earlier this year, the Florida Rehabilitation Council had just three members, and one of them, VR Director Allison Flanagan, is a nonvoting member.

Gov. Ron DeSantis did appoint 13 new members to the board in May — enough to raise membership to the bare minimum — however, it seems some didn’t matriculate. According to Roy Cosgrove, the FDVR-FRC liaison, the Council only had 12 members as of Aug. 2, 2021. The thinned ranks make the Council an inadequate check on the Division when oversight is in dire need.

According to the Florida Department of Education Inspector General’s Office, every audit conducted since 2018 has concluded that FDVR does too little to protect disabled Floridians and the taxpayer dollars meant to help improve their job prospects.

An audit of a $1.3 million contract with Florida Alliance for Assistive Services found that the company inaccurately reported data and didn’t meet deliverables. FDVR did not conduct any monitoring on the contract to make sure the work was being done.

It is one of many such audits illustrating the loose monitoring standards at the Division. The OIG paint a similar picture in audits of contracts with Red Lion Jobs, the Alliance Community and Employment Services, the Suncoast Center for Independent Living, Miami-Dade County Schools’ Adults with Disabilities Program, Nassau County Schools’ Work-Based Learning Experiences Program and the Center for Independent Living in Central Florida.

Those familiar with FDVR’s inner workings tell Florida Politics that these problems could be fixed if the Department of Education were willing to flex its authority. Barring that, it has been suggested that the Florida Department of Economic Opportunity, which oversees other jobs programs, could right the ship.

But one VR services vendor said they don’t expect any substantive changes at FDVR soon.

“They have the luxury of having a Governor right now that would love to tell the federal government to go to hell,” they said.