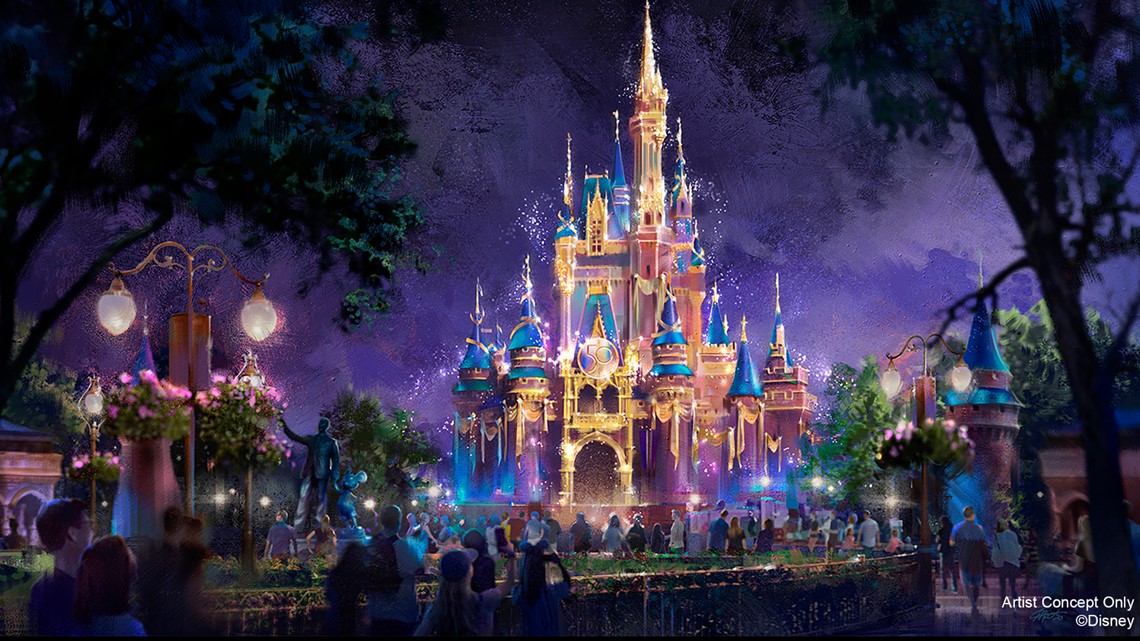 'This celebration is definitely more muted than (Disney) wanted.'

How the Magic Kingdom came to be is a dramatic story.

“It was a miracle on so many levels that it did come to fruition,” said Aaron Goldberg, a Disney historian and author of “Buying Disney’s World.”

Looking to expand his Disneyland empire eastward to Florida, Walt Disney stealthily acquired thousands of acres through fake companies to keep his identity secret. Much of what he bought was underwhelming: Swampland in need of taming.

“Almost three-quarters of the land was underwater most of the time,” Goldberg said. “They went to build the Magic Kingdom and they needed to reinforce it by like 14 feet.”

The Florida Legislature also granted Disney incredible powers, allowing the company to create its own government with the authority to handle building codes, run a fire department, construct roads and even build a nuclear power plant if Disney wanted one (although experts have argued the state overstepped its authority to grant permission on that one.)

Despite all the odds and improbabilities, a completed Magic Kingdom opened Oct. 1, 1971.

As the world’s most popular theme park officially turns 50 years old on Friday, some of Disney’s most loyal fans are arriving to pay homage and celebrate the park’s legacy, a history unlike any other theme park.

But the fanfare is clouded by a pandemic that disrupted the company’s plans for a monster celebration.

Will tourists still show up in masses?

The 50th anniversary feels understated compared to the over-the-top birthday parties Disney was known for, Goldberg said. Disney, for instance, handed out cars and big prizes during Disneyland’s 30th anniversary.

“There were literally nationwide campaigns, and they would give cars away every day. You walked in, you had a chance of winning a car,” Goldberg said. “There was something like 400,000 prizes given away. We’re talking about Cadillacs and Chevys. We’re not talking about crappy cars.”

For another park milestone, lucky visitors were randomly picked to spend the night in the remodeled Cinderella Castle suite. It was a once-in-a-lifetime night stay for those lucky winners during Disney World’s 35th anniversary, Goldberg said.

Those freebies and extraordinary sweepstakes haven’t been announced this time around for the 50th, said Goldberg.

Earlier this week, he perused hotel prices at a hotel on Disney property and found rates going as low as $130 to $150 per night around the Oct. 1 date. The prices weren’t astronomical, and the rooms weren’t sold out, and Goldberg said, “That leads me to believe they’re pulling locals. They’re pulling people from the state of Florida. You’re going to get your die-hards (at the anniversary), but I really don’t think it’s going to be a huge push like you would normally see.”

The parks will be crowded starting Friday and heading into this weekend, predicted Len Testa, who is the co-author of “The Unofficial Guides to Walt Disney World” and runs TouringPlans.com to help people plan their Disney trips by looking at ride wait times.

“I think a lot of people canceled trips and pushed them off to November and December,” Testa said. “We’re going to see instead of concentrated crowds around the 50th, I expect we’ll see more people pushing back their trips.”

Some Disney fans might have previously made plans to come to Orlando this fall to ride some of Disney World’s latest and greatest thrill rides — Guardians of the Galaxy: Cosmic Rewind, one of the world’s longest enclosed roller coasters, and Tron Lightcycle Power Run, a fan-favorite ride that first debuted in Shanghai Disneyland. Both rides were originally expected to open this year in time for the 50th.

But then the pandemic happened, and construction was delayed.

“This celebration is definitely more muted than (Disney) wanted,” Testa said. “I think the one decision they would like to be able to have a do-over on is stopping construction on things during the pandemic.”

The good news for Disney: The company is stretching the 50th birthday party for 18 months.

In March, Disney will unveil a Star Wars-themed hotel that’s attracting a buzz for an immersive experience and also high prices. Disney also confirmed this week it will open Guardians sometime in 2022 but has stayed quiet on when Tron will debut.

For tourists, “At this point, you might be coming in for the holidays but you’re probably coming in for 2022,” Testa said. “That’s the time to come. Does anyone need to come in the next month? Probably not.”

But one person who wouldn’t miss it is Rikki Niblett.

Ten years ago, Niblett stood at the Magic Kingdom, soaking in the “utter chaos” of the crowds on the park’s 40th anniversary. She was surrounded by thousands, just like herself, who adored The Mouse.

“It was just a nutso day, so many fans were there. The energy was so high,” said Niblett, 38, who does social media for a car company as her day job. In her spare time, she blogs about Disney and is co-host of the Be Our Guest Podcast. “I remember saying to myself at that moment while I was standing on Main Street, USA, I was like, I will be here for the 50th. I don’t care what it takes. I will make sure that I have to be here for the 50th … There’s just something about it to be here for that day.”

Sure enough, like she promised herself a decade ago, Niblett will drive seven hours from her home in Atlanta and arrive in Orlando in time for Friday’s celebration. She splurged over $100 for a one-day ticket because the annual pass reservations were all snatched up, she said.

Visit Orlando’s leader expects more tourists like Niblett are coming to Disney World for the anniversary.

“The 50th-anniversary celebration of Walt Disney World Resort is a significant milestone for visitors to celebrate and adds to our continuously growing collection of new reasons to visit Orlando. We know there is still pent-up demand, especially for international travelers, so the timing could help further our recovery, especially as the U.S. opens back up to overseas travelers in November,” said Casandra Matej, president and CEO of Visit Orlando, the taxpayer-supported tourism advertising agency.

Niblett’s itinerary this weekend will include riding the classic attractions, like It’s A Small World.

“A lot of the things I’ll be doing on the 50th will be experiencing those attractions that were open back in Oct. 1, 1971,” Niblett said. “They still hold the test of time, and they still excite guests.”