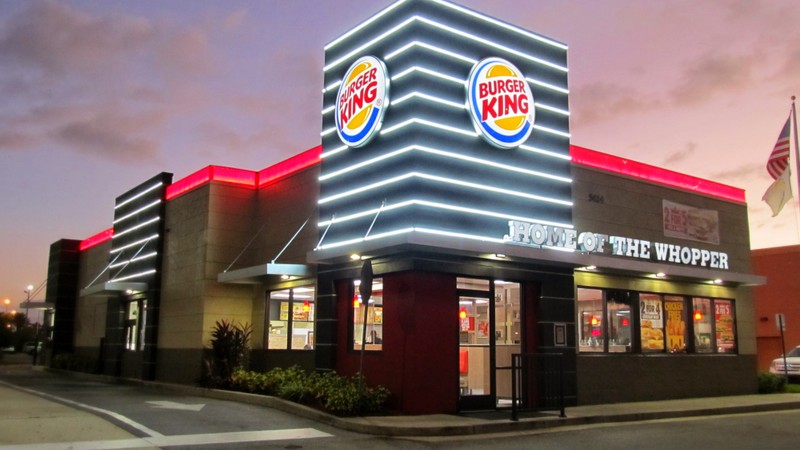 The Whopper was born here. So was the Bloomin’ Onion.

A state known for its famous cartoon mouse, pristine beaches and wild animal stories also served as the birthplace of some of the more popular restaurant and fast-food chains in the U.S. and beyond.

Here are stories behind the more popular restaurants that originated in Florida.

Two cities claim Burger King, but at least both are in Florida.

The fast-food burger franchise began in 1953 as Insta-Burger King on Beach Boulevard in Jacksonville. Later that decade, two Miami-based franchisees bought the financially struggling company and renamed it Burger King.

The hamburger chain was on its way in 1957 when the Whopper was added to the menu. Burger King hit the national scene especially during the 1970s, when the chain advertised heavily on television with its “Have It Your Way” commercials that touted “hold the pickle, hold the lettuce, special orders don’t upset us.”

The predecessor of the burger mega-chain Burger King was originally founded in 1953 in Jacksonville, by relatives Keith J. Kramer and Matthew Burns. They decided to call their first location Insta-Burger King due to the broilers they purchased to cook the burgers, called Insta-Broilers. The following year, James McLamore and David Edgerton began opening Insta-Burger franchises in Miami — they replaced the Insta-Broilers with the flame broiler system that Burger King is famous for. Due to financial hardships, Kramer and Burns eventually sold the company to McLamore and Edgerton who subsequently renamed the chain Burger King.

Children also enjoyed a visit to BK, receiving a paper crown that adjusted to their head size. And don’t forget the funky maroon and orange uniforms (with a goofy-looking hat to match) employees wore in the 1970s, certainly helping to build its brand.

But it was perhaps its offering of flame-grilled burgers that kept customers returning, along with its variety of food offerings including thick french fries and the Hershey’s Sundae Pie dessert.

Sonny’s BBQ is a Southeastern restaurant chain known for its slow smoke traditions, Southern hospitality and “Random Acts of BBQ” initiative, where it throws surprise feasts for community members or organizations nominated for their good deeds.

The tradition of giving dates back to 1968 when it was founded at 2700 NE Waldo Road, Gainesville, by Floyd “Sonny” Tillman and his wife, Lucille.

Over the years, the local joint became a Florida favorite and expanded across the state and Southeastern U.S. Its first franchisee, John Kirkpatrick, opened an Ocala location in 1977, according to the restaurant’s online history.

Less than five years later, Sonny’s had 25 restaurants. And by the end of 1998, the barbecue staple had welcomed its 100th location and spread to seven other states: Georgia, Alabama, Mississippi, Louisiana, South Carolina, North Carolina and Kentucky.

Anyone who has made then savored Reb Lobster Cheddar Bay Biscuits at home can thank this Florida original.

Red Lobster opened in Lakeland in 1968 and General Mills two years later acquired the company. The chain expanded rapidly, especially in the 1980s, and today has more than 700 restaurants worldwide, including in nearly every U.S. state and in countries including Japan, Mexico, China and others.

The famous biscuits — served in restaurants first in 1992 — became so popular that the biscuit mix hit grocery store shelves so consumers can bake them in their home.

Red Lobster for more than half a century has specialized in of course lobster but also crab, shrimp and other seafood, while also serving up chicken, pasta, steak, salads, dessert and more.

The popular Italian restaurant chain opened as a unit of General Mills in Orlando.

So Olive Garden was not a typical restaurant that began from an owner or two, as General Mills — a multinational manufacturer that markets branded consumer foods not based in the Sunshine State — solely intended to create a chain from the get-go.

Even so, Florida can claim the first one at 8984 International Drive along Interstate 4 in Central Florida, which made sense with Disney World nearby.

Olive Garden has become known for its “endless” soup, salada and breadsticks, along with popular pasta dishes including shrimp alfredo, “Tour of Italy” (featuring three of Olive Garden’s most popular dishes: chicken parmigiana, lasagna and fettuccine alfredo) and lasagna fritta.

Sure, there are hundreds of Hooters restaurants across the country, but there’s only one Original Hooters, and it can be found on Gulf to Bay Boulevard connecting Tampa to Clearwater Beach.

Opened by six businessmen “with absolutely no previous restaurant experience,” according to the restaurant’s website, it was incorporated on April Fool’s Day, 1983, and opened on Oct. 4 of that year.

An undated photo provided by Hooters restaurant shows the original building that housed Hooters in Clearwater.

The Original Hooters operated out of a ramshackle wood structure before being almost entirely demolished and rebuilt in 2012. Now, it features a new inside/outside bar area, a merchandise and to-go area, and a museum dedicated to Hooters history.

Of course, the main attractions, in addition to the friendly staff in the famed orange and white outfits, remain the World Famous Wings. On Super Bowl Sundays, for instance, this Tampa Bay Hooters goes through about 20,000 of ’em.

The story goes that friends Chris Sullivan, Robert Basham, Tim Gannon and Trudy Cooper came together with “the dream of opening their own restaurant — a place casual in atmosphere, with quality food and service at the top of the list,” according to the restaurants’ website.

“To ensure their haven would stand out from the pack, they chose an Australian theme to fit the relaxed but lively mood of their ideal restaurant.” Their motto? “No rules, just right.”

The original Outback Steakhouse, which opened in 1988 and has since been remodeled, is at 3403 Henderson Blvd. in South Tampa.

Outback was the first restaurant by the proprietors’ Bloomin’ Brands, which is also still based in Tampa and now owns and operates Outback Steakhouse, Carrabba’s Italian Grill, Bonefish Grill and Fleming’s Prime Steakhouse & Wine Bar.

Bloomin’ Brands website notes that it’s one of the world’s largest casual dining companies with approximately 77,000 employees and more than 1,450 restaurants across the globe.

What began as local barbecue restaurant 32 years ago in Southwest Florida has spread across the U.S.

The first Rib City Grill opened on U.S. 41 in Fort Myers after original founder Gerry Pastore created the concept of a small, family-style barbecue joint. In early 1990, Pastore founded a second location on Leonard Street in nearby Cape Coral.

The restaurants caught the attention of Paul Peden, a Fort Myers restaurateur who met with Pastore who no longer was involved with the restaurants. Peden eventually became a partner in Rib City Grill and later bought the company.

The chain grew across Southwest Florida and eventually to other states, including Colorado, Missouri, Tennessee, Illinois and Virginia.

“We stick to what we know, and we produce what we say we will — real barbecue, great ribs and excellent service,” Peden told the Fort Myers News-Press in 2019. “This philosophy became the foundation of our growth.”

Credit Guy Fieri with giving Jacksonville-based Metro Diner a boost just when it was needed most. The first Metro Diner opened in Jacksonville’s San Marco neighborhood in 1992 in a location that had housed diners under other names since the 1930s and was taken over by its current management team in 2000.

But it was a 2010 appearance on “Diners, Drive-ins and Dives,” with Fieri raving about the “crunchification” of Metro Diner’s signature meatloaf, that brought national attention to the chain.

Metro Diners, known for its “comfort food with flair,” can now be found at more than 50 locations in 12 states, including 25 in Florida.

Chris Sorensen and Robin Sorensen were Jacksonville firefighters, just like their dad, when they opened their first Firehouse Subs location at Crown Plaza in suburban Jacksonville in 1994.

The chain, known for its tasty subs and firehouse-decorated restaurants, now has nearly 1,200 locations in 46 states, including about 170 in Florida. In a 2016 interview with CNBC, Robin Sorensen said he and his brother had less than $100 in their checking accounts when they opened their first restaurant.

They started the Firehouse Subs Public Safety Foundation in 2005 to provide funding, equipment and education for first responders.

The first Hurricane Grill & Wings opened along Seaway Drive on Hutchinson Island in Fort Pierce in 1995 as Chris’ Hurricane Bar and Grill after founder Chris Russo, who was only 22 years old at the time.

The most popular menu items were chicken wings and cold beer. By 2008, the restaurant chain had expanded to 30 locations in Florida, Georgia and Nevada. Now, it has grown to 71 locations in 15 states, including Alabama, Arizona, Colorado, Iowa, Maryland, Michigan, Minnesota, New York, North Carolina and Texas.

Bonefish Grill founders Tim Curci and Chris Parker — “fueled by their shared love for catching, cooking and serving fresh fish,” according to the restaurant’s website — opened its first location in St. Petersburg in January 2000.

The following year, it was acquired by the Tampa-based Bloomin’ Brands, and over two decades has become one of the biggest seafood chains in the country.

As its name suggests, Bonefish Grill is known for its wood-grilled fish, along with other seafood selections such as its Bang Bang Shrimp appetizer tossed in a creamy, spicy sauce. It’s also known for its cocktail offerings, stating that its hand-crafted martinis are “shaken no less than 20 times.”

Today, the chain has nearly 200 locations in 31 states, according to its website’s directory, though its home of Florida still has by far more locations than any other state.

According to PDQ’s website, Reader wanted a fast-food place that was fresh and he felt good about feeding to his children, while Basham was in search of fresh flavor and inspiration. They found what they were looking in a North Carolina neighborhood joint called Tenders, making a deal on the spot with the restaurant.

When they opened their first Tampa restaurant on Halloween weekend, “car lines wrapped around the building, and folks kept coming back for more.”

Since then, PDQ has opened dozens more locations throughout Florida — including at Tampa International Airport, Raymond James Stadium and Amalie Arena — as well as states such as North Carolina, New Jersey and New York.

What began as a downtown Fort Myers restaurant moved quickly in a couple years, faster than a 1969 Boss 429 Mustang.

Ford’s Garage quietly opened in 2012 and, a couple years later, something happened: A few retired executives from Naples stopped by and noticed the detail and care put into the restaurant, from the black Model T suspended above the bar (which honks OOGA with steam spewing from its tailpipe) to the branded Ford’s Garage logo on burger buns.

Ford Motor Co. reached out about partnering with the restaurant, and the two forged a unique relationship. Ford’s Garage became the first and only restaurant to be allowed rights to Ford’s iconic blue-oval logo, as well as other of the automotive giant’s brand imagery, including archived historical photos, images of vehicles and actual Model Ts.

There’s now 16 Ford’s Garage restaurants in three states including one in St. Augustine, next to a Ford dealership along Interstate 95. Other ones in Florida are in Brandon, Cape Coral, Countryside, Estero, Kissimmee, Lakeland, Orlando, Sarasota, St. Petersburg, Wellington, Wesley Chapel and Westchase.

But what about the food? Ford’s Garage offers a vareity of burgers, along with onion rings served on a piston rod, “Edsel’s Hot Pretzels” with dip sauce, loaded mac & cheese varieties, desserts like the caramel apple cookie skillet and more.