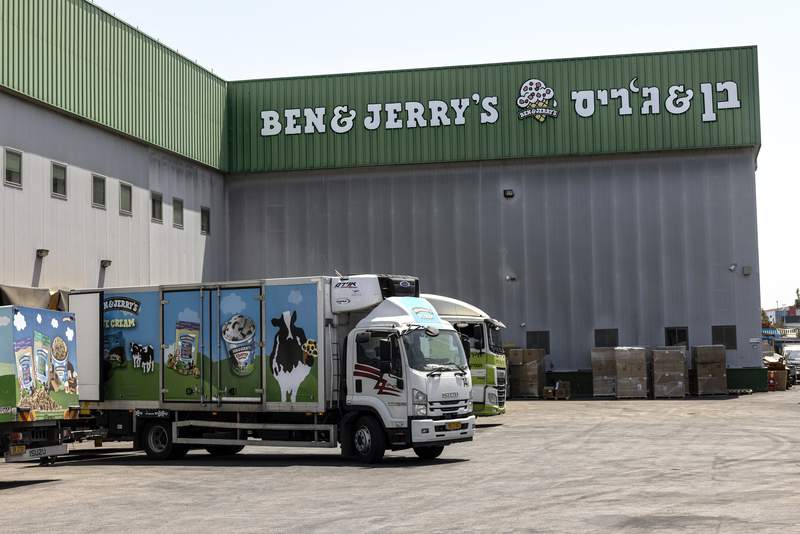 Starting Tuesday, Florida will stop buying shares of British consumer goods conglomerate Unilever PLC over a decision by a subsidiary, ice cream company Ben & Jerry’s, to stop selling its products in the West Bank and Gaza.

The move comes three months after Gov. Ron DeSantis directed Ash Williams, executive director and chief investment officer of the Florida State Board of Administration, to place Ben & Jerry’s and its parent company on the Florida List of Scrutinized Companies that Boycott Israel.

DeSantis set the Tuesday deadline days after Ben & Jerry’s announced it would no longer sell its products in the Israeli-occupied Palestinian territories at the end of 2022, when its license agreement there expires.

Ben & Jerry’s said it would continue sales in Israel “through a different arrangement.”

The Florida SBA, which manages investments for Florida’s pension and hurricane catastrophe funds, among others the Florida Legislature chooses, has $139 million invested in Unilever, a small portion of the agency’s roughly $200 billion portfolio.

Florida’s law prohibiting SBA investment of companies boycotting Israel bars the state from buying shares of, giving contracts to and dealing with companies “terminating business activities, or taking other actions to limit commercial relations with Israel, or persons or entities doing business in Israel or in Israel-controlled territories, in a discriminatory manner.”

Under the law, any company designated as “scrutinized” must be given a chance to rescind a boycott of Israel.

Florida is one of 35 U.S. states to pass so-called “anti-BDS” statutes in opposition of a Palestine-led movement calling for the boycott, divestment and sanctioning of Israel and Israeli companies.

The BDS movement, modeled after the anti-apartheid movement in South Africa, is seen as a way to pressure Israel to withdraw from the occupied West Bank and Gaza territories, among other concessions.

Florida’s law does not require the SBA to divest itself of funds already placed in such companies.

Arizona and New Jersey announced plans to completely withdraw all funds invested in Unilever. Last month, Arizona sold $93 million in Unilever bonds and said it planned sell the remaining $50 million it had invested in the company.

Several other states, including Illinois and New York, have warned the company that they may consider similar action.

Proponents of BDS call it a nonviolent way to show support for Palestinians in the occupied territories. Critics, including the Anti-Defamation League and German Parliament, say the movement is inherently antisemitic.

They added that their decision to discontinue sales next year in the occupied territories “is not a rejection of Israel” but “a rejection of Israeli policy, which perpetuates an illegal occupation that is a barrier to peace and violates the basic human rights of the Palestinian people who live under occupation.”

But there is “nothing progressive about boycotting the only democracy in the Middle East,” a press note from DeSantis’ office said in August.

“I will not stand idly by as woke corporate idealogues seek to boycott and divest from our ally, Israel,” DeSantis said at the time.

“Israel is a friend of Florida, it’s a thriving democracy with incredible people and culture and Ben & Jerry’s decision to very publicly discriminate against Israel was a short-sighted attempt to virtue signal to folks on the radical left,” he said in a written statement. “The second Ben & Jerry’s decided to discriminate against Israel, it affected Florida’s ability to make investments with its parent company.”

London-headquartered Unilever, which employs nearly 2,000 people in Israel, said it opposes antisemitism and does not support the BDS movement.

The company, which bought Ben & Jerry’s in 2000, said it has a “strong and long-lasting commitment to our business in Israel” and that the independent board of Ben & Jerry’s, not Unilever, chose to stop selling products in the territories.