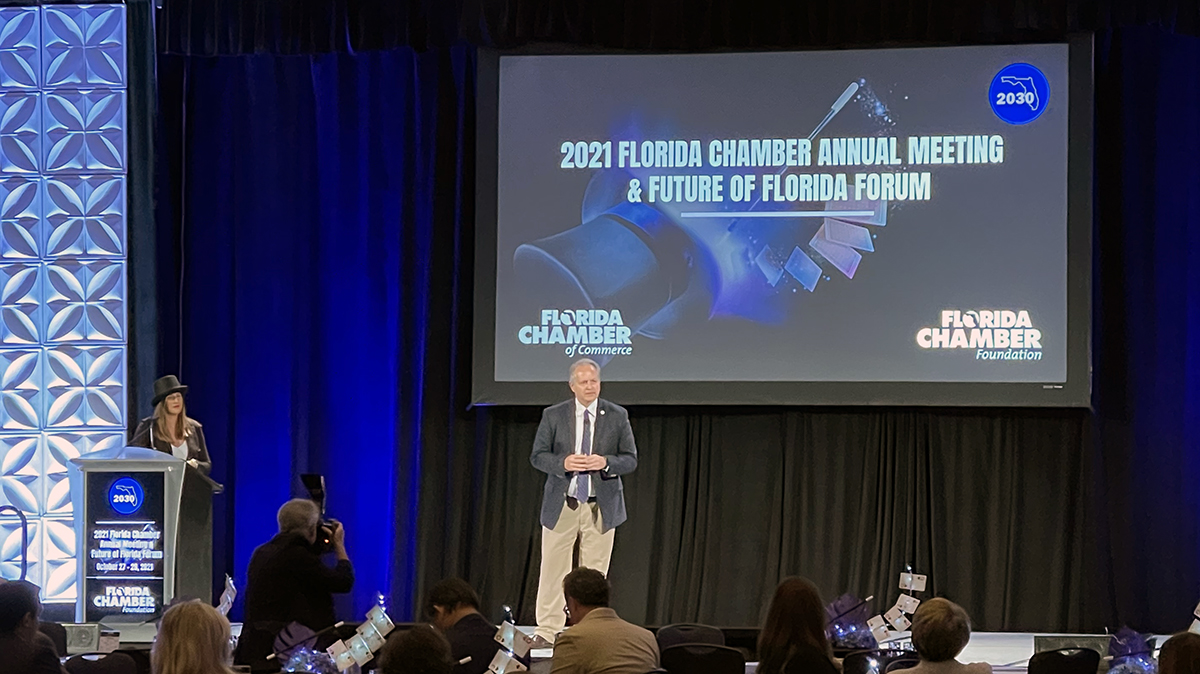 'If we do the right things in Florida, we can grow to the 10th largest economy in the world by 2030.'

But the Florida Chamber of Commerce is changing course this year, emphasizing the improvement of children’s health and welfare status in the next eight years and, in turn, continuing to grow the state’s economy to the 10th largest in the world by 2030.

“What we believe, in the next 10 years if we do the right things in Florida, we can grow to the 10th largest economy in the world by 2030. We are going to have 4 million more people and 2 million more jobs,” said Mark Wilson, the Chamber’s president and CEO. “And you can ask me all morning, ‘How are we going to do that?’  What do we need to do in education and roads and jobs and technology and RFT and international trade and water and the environment? We can have that conversation.”

Wilson told an audience gathered in Orlando that there are 829,000 children in Florida living in poverty today, with half of them living in one of 150 ZIP codes across the state.

“So as business leaders, I would say to you, ‘Why is that acceptable? It’s not,” he said, adding, “What can 150 local chambers of commerce do to help raise awareness on this issue? What can we all do starting in 2022 to wake up millions of people in Florida about the fact the future of our kids absolutely matters?”

Wilson made his remarks at an early morning breakfast hosted by the Nemours Foundation that was held before the Chamber’s annual meeting and two-day “Future of Florida Forum.”

Wilson is joining efforts underway by the Nemours Children’s Health, which wants to see Florida jump in the ranks regarding child well-being. Florida currently ranks No 35 in children’s health and wellness.

Nemours wants the state to jump to the No. 10 spot.

“We tend to think of business interests being objective and rational and of an interest in child health as being more of the realm of charity and emotion. However, … child health is an incredibly powerful tool for shaping the economic vitality of a region,” said R. Lawrence Moss, president and chief executive officer of Nemours Children’s Health.

Moss added that  “the human capital workers bring to the economy is largely influenced by their childhood,” he said.

“Even minor tweaks to a child’s circumstances, even things like providing snacks in preschool, catching literacy issues early, and nipping asthma in the bud have a snowballing and powerful effect throughout the critical years of development of education, increasing the likelihood that these children will grow into vibrant and economically productive adults,” he said.