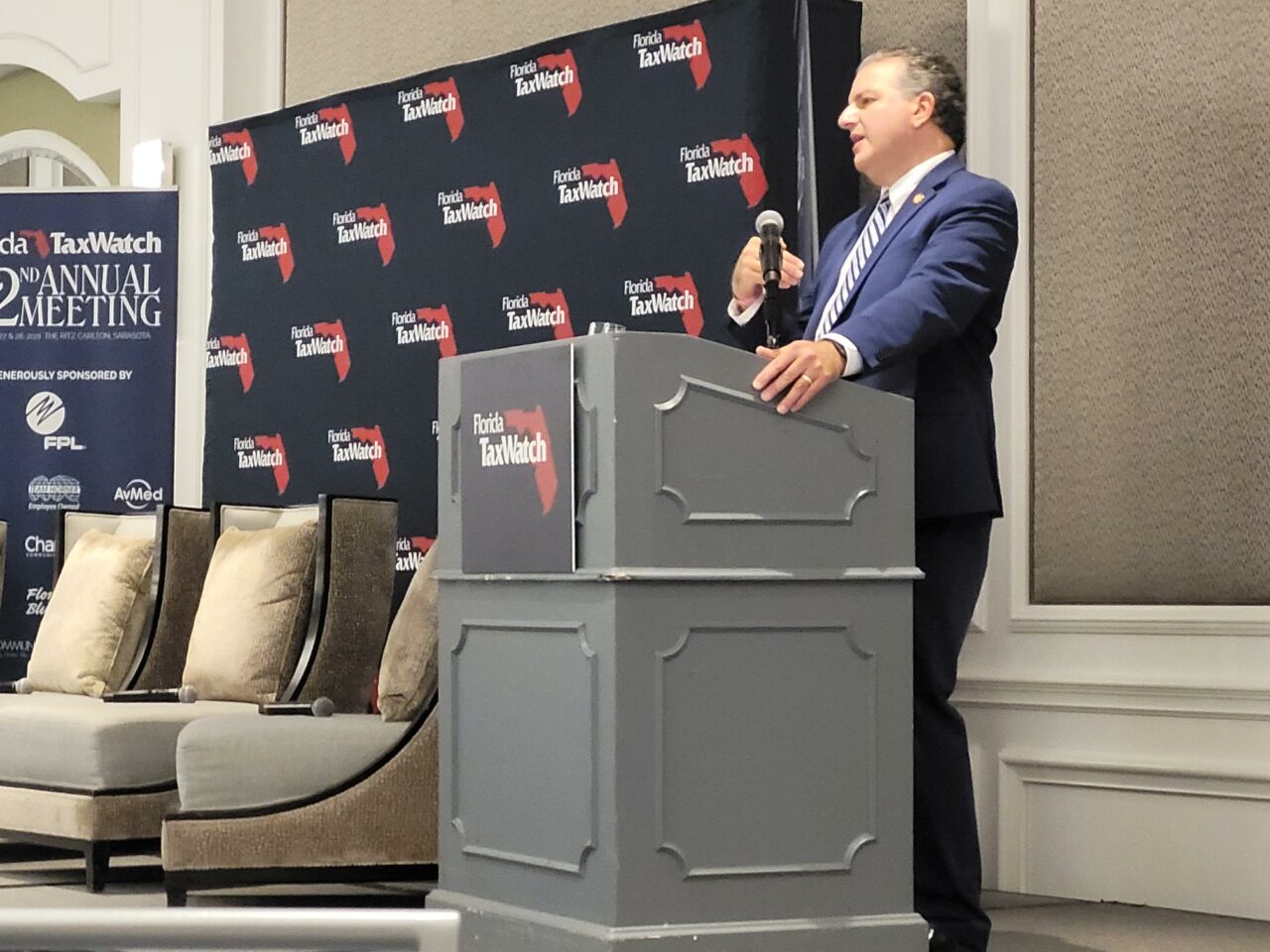 He also discussed plans to woo In-N-Out Burger to Florida.

“This is nothing more than a new way to harvest dollars,” he said. “I don’t like to feed the beast more money.”

His concerns found a like-minded audience at Florida Tax Watch’s annual meeting, held this year at the Ritz-Carlton Sarasota. Patronis served as the keynote speaker at a closing luncheon, where he touted Florida’s pro-business environment.

While guests dined on tacos and fajitas prepared by the chefs at the resort, Patronis also found out plenty of diners in the room admit to a hunger for a certain fast food offering. He asked the audience how many had dined at In-N-Out Burger, a California-based chain, and a majority of hands in the Ritz-Carlton ballroom rose up. If it seems unrelated to cash flow monitoring, it’s not. Patronis was setting the tone for a pro-business mindset.

He said he had no idea how many fans the franchise had in Florida before he made a public appeal to In-N-Out President Lynsi Snyder to relocate the burger chain here. That came after In-N-Out leadership said they refused to abide by California laws demanding restaurants require proof of COVID-19 vaccinations from customers.

“I had no idea how many people on the East Coast had eaten a West Coast burger,” he said. But soon he had consultants offering services for free to help woo the business.

For Patronis, his efforts, whether it’s against IRS monitoring or economic recruitment, are all in service of maintaining a pro-business atmosphere in the state of Florida.

A former member of the Legislature, he said part of that comes with making sure the state doesn’t start spending money recklessly or inefficiently. Originally appointed to his Cabinet post by former Gov. Rick Scott, he praised the former Governor for being the first in decades to pay down state debt instead of perpetually refinancing.

Incidentally, the last Governor before Scott to do so, Republican Bob Martinez, was in the audience at the luncheon.

He also praised Gov. Ron DeSantis for aggressive vetoes worth more than $1 billion in the 2020 budget in response to the pandemic.

“That’s the message loud and clear, not just for the Legislature and to Washington, D.C. but the citizens of the state that were willing to enter into the state I’m so proud to serve. To see that type of action from Gov. Ron DeSantis says a lot about the type of place he’s trying to establish here in Florida,” Patronis said.

As for the coming Session, Patronis will be focused on funding urban rescue, responders who proved invaluable this year after the Surfside condo collapse that killed 98 people in June.

But the biggest applause of the night came when he discussed the need for a consumer protection dealing with “negative option billing.” While a somewhat bland term, Patronis gained his audience’s attention when he discussed trial periods for Netflix accounts and gym memberships.

“It will be, by law or statute, that those companies in doing business in the state of Florida will have to make it just as easy to cancel service as it was to sign up,” he said. “So it’s as easy as a link on the website for you to sign up for your new XM Radio subscription. We just need to click that same line in order to cancel the subscription.”