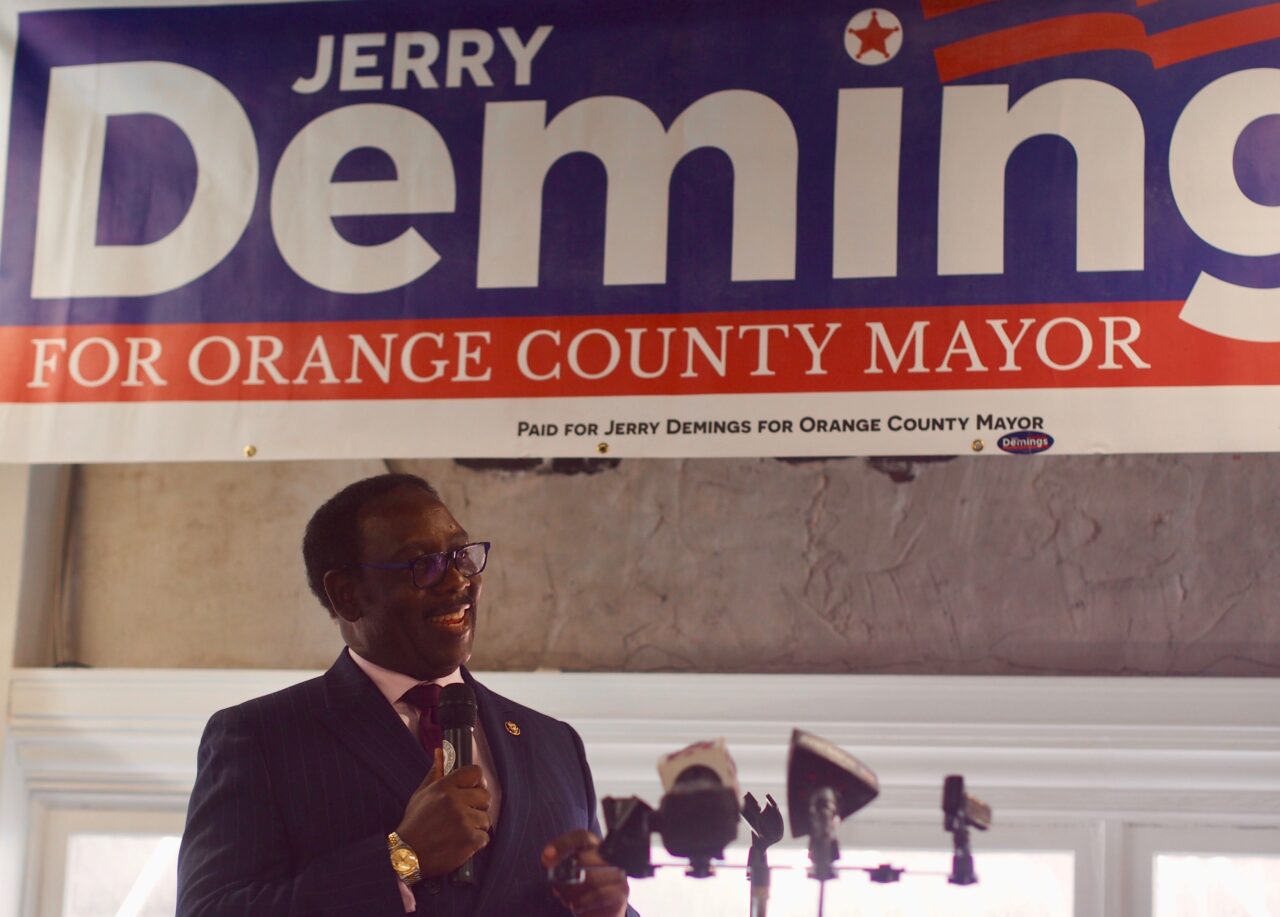 Demings will be heavily favored to win a second term.

Instead of spending all of his first term preparing Florida’s fastest-growing urban county for a new era as he had envisioned, Orange County Mayor Jerry Demings found himself running a crisis management operation for 20 long months.

But that proved to be his strong suit, the former Police Chief, Sheriff, and Orange County Public Safety Director offered Thursday, as he kicked off his reelection campaign.

“The last three years I’ve spent at least half of it focusing on our response and recovery related to the pandemic,” Demings said Thursday evening at a rally in downtown Orlando. “Yes, we had to suspend our effort to put a transportation sales tax on the ballot in 2020. We had to suspend our efforts to expand the Orange County Convention Center. But, things happen sometimes for a reason.

“I really believe that because of my faith, because of the experiences I had over my 40-year career, I was uniquely qualified to shepherd the ship through the unprecedented time of this pandemic,” Demings continued. “I don’t know if you’re going to find anyone else with the breadth of crisis management that I’ve been involved in over the years.”

Demings had other things to boast Thursday evening, including raising the minimum wage to $15 an hour for county employees, initiating affordable housing programs, and bringing in high-level technology and climate sustainability programs. But he also had his biggest envisioned initiatives, particularly a comprehensive transportation upgrade backed by a one-cent sales tax, put on ice.

Thursday he vowed to bring back the sales tax proposal and push to get it before Orange County voters on the General Election ballot in 2022, to create a long-term, dedicated source of funding for buses, trains, roads and highways.

“Fixing our broken transportation system is one of my immediate priorities,” Demings said.

After Demings, a Democrat, and DeSantis both took office following their 2018 elections, the two often worked well together, at first. But that changed, and turned bitter, starting in the summer of 2020, when the two diverged dramatically over COVID-19 response philosophies. Demings implemented aggressive policies regarding mask and vaccine mandates, while DeSantis pursued aggressively minimalist responses. The Governor threatened to punish Orange County for going its own way.

“There have been numerous suggestions that we would be fined — Orange County — for the actions we’ve taken to keep our employees and residents safe. And what did I say to that? Bring it on!” Demings said Thursday.

For now, Demings has no competition for the 2022 mayoral election. He might not get any, or at least any serious competition. The county’s voter base has been turning quite blue in recent years. Now, Democrats boast 43% of the county’s registered voters, compared with the Republicans’ 25%.

When Demings was elected in 2018, he was the first Democrat elected Mayor of Orange County in 18 years. His election coincided with Democrats flipping control of the County Commission for the first time in 18 years. Democrats now hold six of those seven seats.

Demings’ longer-term ambitions for even higher office have been widely speculated. For a while that had included speculation of a run against DeSantis next year. Demings dismissed that talk, to seek reelection. He is married to Democratic U.S. Rep. Val Demings, who is making her own statewide run in 2022, challenging Republican Sen. Marco Rubio.

Yet, already, Thursday, the Mayor rekindled speculation about what might follow. Orange County has term limits on the Mayor, so if Demings wins reelection, he would get his second and final term.

“We’ll see what God has for me after that,” he said Thursday.

previousLast Call for 10.28.21 — A prime-time read of what’s going down in Florida politics