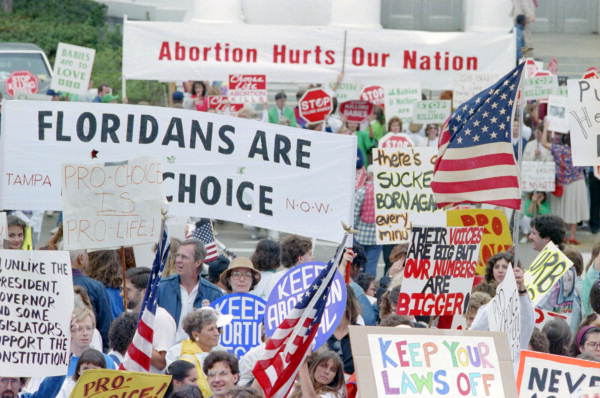 'When those in power can impose their beliefs on the rest of us, no one is truly free.'

It’s been nearly two months since Texas began enforcing the most restrictive anti-abortion law in the nation.

A few weeks later, a copycat bill landed in the Florida Legislature. Like the Texas version, the measure would ban abortions after about six weeks and rely on private citizens to enforce it by suing individuals helping women secure abortion services.

But since state Rep. Webster Barnaby, a Republican representing part of Volusia County, filed HB 167 on Sept. 22, no companion bill has appeared in the Florida Senate. Barnaby’s bill has been routed to the House’s Professions & Public Health Subcommittee but hasn’t come up yet.

Meanwhile, two powerful Republicans have expressed opposition to relying on private citizens, rather than public officials, to enforce any abortion ban. Additionally, members of the Florida Legislative Black Caucus — to which Barnaby belongs — plan to fight it, along with other Democrats and abortion rights advocates.

As in Texas, Barnaby would ban abortions when medical workers use sonography to detect “cardiac activity or the steady and repetitive rhythmic contraction of the fetal heart within the gestational sac.” That happens at around six weeks. The only exception would be for medical emergencies.

The bill carries no criminal sanctions, but private citizens who successfully sue providers or people who otherwise help women get abortions could receive judgments of $10,000 per case. Defendants would have to shoulder their own legal costs.

Among the skeptics are Republican Senate President Wilton Simpson. Initially, he had expressed interest in Texas’ law, as did Florida House Speaker Chris Sprowls, according to a statement released on Twitter in early September. Simpson said earlier in a written statement that “the Texas law represents a new approach and the fact that the Supreme Court didn’t block it from taking effect is encouraging.”

“President Simpson has stated concerns with and has said he does not support the provision of the Texas law that includes financial incentives for reporting,” Senate spokeswoman Katie Betta said in an email to the Florida Phoenix. “He has also reiterated that Florida law has made exceptions for rape and incest.”

Passidomo, the powerful Senate Rules chair and the recently chosen Senate President-designate for the 2022-2024 legislative term, told reporters in Tallahassee last month that she is critical of the bill because of a childhood memory involving the book “The Diary of a Young Girl,” referencing Anne Frank.

“I do not support citizen enforcement of any kind of laws because I think that is a slippery slope,” Passidomo said.  “When I was a kid, I was like 8 or 9 years old, I used to read all the time. The one book I remember the most from my childhood was the diary of Anne Frank.”

Passidomo continued: “And I remember reading that and I kind of identified with her because we were about the same age. … And I remember when it was over, and I was devastated because she died. She died because she got turned in by a neighbor — that stays with me. So, when we talk about this vigilante type of provision, I am uncomfortable with them. I don’t think that’s the American way.”

Sprowls has tapped state Rep. Erin Grall, a Republican representing parts of Indian River and St. Lucie counties, to take the lead on anti-abortion legislation during the 2022 Session. Grall told the Phoenix on Tuesday that she had no details to share at this point.

“Right now, we’re just doing our research and looking at what’s happening around the country and trying to have a good understanding of what the Supreme Court is going to be considering,” she said.

Shevrin Jones and Angela Nixon — both members of the Legislative Black Caucus — told the Phoenix they haven’t spoken with Barnaby about the anti-abortion bill but will continue to advocate against the measure.

Jones, a Democrat representing parts of Broward and Miami-Dade counties in the Florida Senate, doesn’t know the bill sponsor well but said, “Rep. Barnaby will get pushback if he ever brought that to the Black Caucus [meeting].”

“I hate the entire bill,” Jones said in a phone conversation.

Nixon, a Democrat representing part of Duval County in the House, said in a phone interview that she has “not personally had a conversation with him [Barnaby]” but is frustrated that Republicans “put politics over health care” for women.

“We’re going to do a lot of organizing just to stop it from happening,” Nixon said, adding that “these decisions [regarding women’s health] really need to happen between the patient and doctor.”

State Rep. Michele Rayner, also a Democrat and member of the Black Caucus who represents parts of Hillsborough, Manatee, Pinellas and Sarasota counties., said in a written statement:

“All people should be able to get reproductive health care that meets their needs throughout their lives, and we’ll be making that message clear in the streets and in the Florida Legislature.”

Situation at the Supreme Court

Meanwhile, the U.S. Supreme Court heard oral arguments on Monday in separate challenges to Texas’ law by abortion providers and the Biden administration. The Washington Post reported that the justices appeared willing to grant the providers’ challenge, setting up the case for argument on its merits.

According to a joint study by the Tara Health Foundation and Schusterman Foundation, a majority of Floridians who responded to a survey value access to abortion services for women. Among Florida respondents, 72 percent believe “access to abortion is an important part of women’s rights and gender equity.”

Laura Goodhue, executive director of the Florida Alliance of Planned Parenthood Affiliates, said in an email to the Phoenix that the issue surrounding abortion “is bigger than Texas,” as abortion rights “are at risk across the country, including here in Florida.”

“Our Supreme Court must take a stand to restore Texans’ constitutional rights and send a clear message to states like Florida that everyone should have the power to control their own body and make their own decisions about their life,” she said.

“When those in power can impose their beliefs on the rest of us, no one is truly free.”