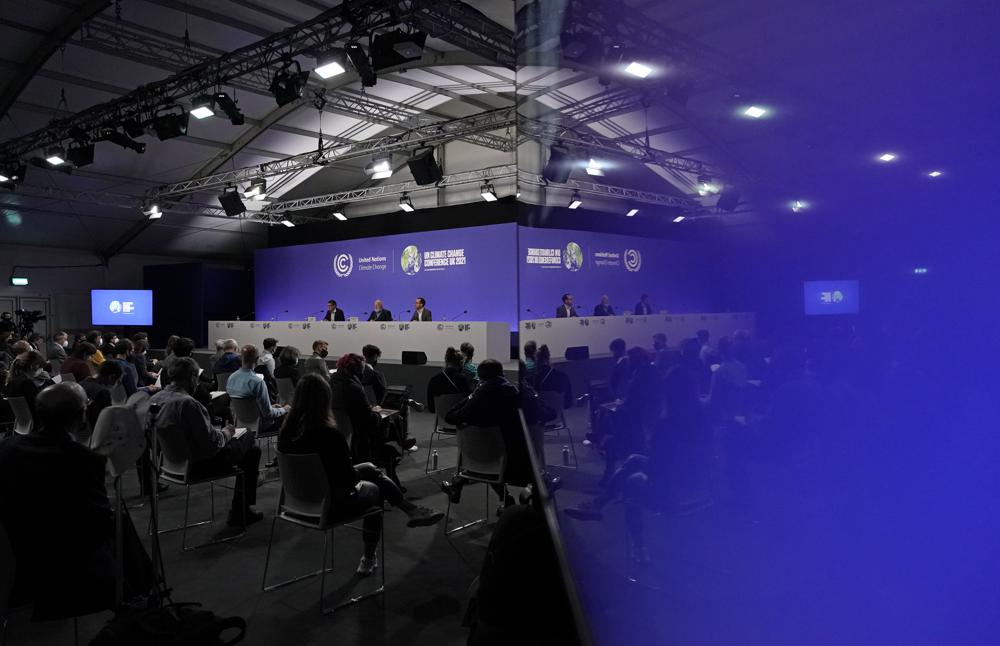 Activists fear the resulting agreement will be ineffective.

Negotiators at this year’s U.N. climate talks in Glasgow appeared to be backing away from a call to end all use of coal and phase out fossil fuel subsidies completely, but gave poor countries hope for more financial support to cope with global warming.

The latest draft proposals from the meeting’s chair released Friday call on countries to accelerate “the phaseout of unabated coal power and of inefficient subsidies for fossil fuels.”

A previous proposal Wednesday had been stronger, calling on countries to “accelerate the phasing out of coal and subsidies for fossil fuel.”

While the chair’s proposal is likely to undergo further negotiation at the talks, due to end Friday, the change in wording suggested a shift away from unconditional demands that some fossil fuel exporting nations have objected to.

There was a mixed response from observers at the talks on how significant the addition of the words “unabated” and “inefficient” was.

“They’re loopholes so large you could drive a lorry through them,” he said, using the British term for a truck.

Helen Mountford, a senior climate expert at the World Resources Institute, said allowing countries to determine which subsidies they consider inefficient would water down the agreement.

“It definitely weakens it,” she said.

Even so, the explicit reference to ending at least some state support for oil, gas and coal offered “a strong hook for phasing out fossil fuels subsidies, so its good to have it in there,” she said.

The question of how to address the continued use of fossil fuels responsible for much of global warming has been one of the key sticking points at the two-week talks.

Scientists agree it is necessary to end their use as soon as possible to meet the 2015 Paris accord’s ambitious goal of capping global warming at 2.7 degrees Fahrenheit. But explicitly including such a call in the overarching declaration is politically sensitive, including for countries, such as Saudi Arabia, that fear oil and gas may be targeted next.

Another crunch issue is the question of financial aid for poor countries to cope with climate change. Rich nations failed to provide them with $100 billion annually by 2020, as agreed, causing considerable anger among developing countries going into the talks.

The latest draft reflects those concerns, expressing “deep regret” that the $100 billion goal hasn’t been met and urging rich countries to scale up their funding.

It also adds wording that could create a fund to compensate countries for serious destruction resulting from climate change. Rich nations such as the United States, who have historically been the biggest source of human-caused greenhouse gas emissions, are opposed to any legal obligation to pay for loss and damage suffered by poor countries.

Negotiators from almost 200 nations gathered in Glasgow on Oct. 31 amid dire warnings from leaders, activists and scientists that not enough is being done to curb global warming.

According to the proposed decision, countries plan to express “alarm and utmost concern” that human activities have already caused around 1.1C (2F) of global warming “and that impacts are already being felt in every region.”

While the Paris accord calls for limiting temperature to “well below” 2C (3.6F), ideally no more than 1.5C, by the end of the century compared to pre-industrial times, the draft agreement notes that the lower threshold “would significantly reduce the risks and impacts of climate change” and resolves to aim for that target.

In doing so, it calls for the world to cut carbon dioxide emission by 45% in 2030 compared with 2010 levels, and to add no additional CO2 to the atmosphere by mid-century. So far the world is not on track for that, and developed countries are expected to be asked to submit more ambitious targets for cutting emissions next year.

U.N. Secretary-General Antonio Guterres told The Associated Press this week that the 1.5C-goal “is still in reach but on life support.”

If negotiators are unable to reach agreement by Friday’s official deadline, it is likely the talks will go into overtime. This has happened at many of the previous 25 meetings as consensus from all 197 countries is required to pass decisions.