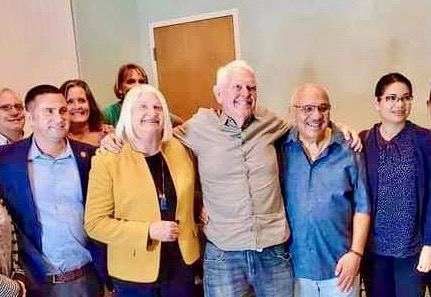 He was 'like a bulldog,' said Democratic Sen. Linda Stewart.

Doug Head, who chaired the Orange County Democratic Party through much of the 1990s and 2000s and spent decades since as a sometimes indomitable and irascible conscience for the party, died after a long illness Saturday night in Orlando.

He came to Orlando in the early 1980s and by the late 1980s was a force in county politics. He served as Orange County Democratic Chair from 1992 to 2004. He also was a Florida Democratic Party State Committeeman from Orange County from 2016 to 2020.

He was “like a bulldog,” said Democratic Sen. Linda Stewart.

“He was a true-blue Democrat, I will tell you that. He did not veer too far, ever, away from the principals of the Democratic Party,” Stewart said. “He helped so many people along the way. He was mentor to so many of the younger ones, who, now, of course, have aged themselves. He was an extremely intelligent person. He read a lot. He stayed up with the issues. So he was a very good resource for kicking things around, because he had a lot of background.”

Head could be stubborn and abrasive, and sometimes could, in Stewart’s words, “hurt feelings.” Occasionally Head found himself in open, public conflict with elected Democrats, such as Orlando Mayor Buddy Dyer or Orange County Mayor Jerry Demings.

“Over 40 years ago, when I joined the Orange County Young Democrats organization as a young man, Doug Head was there. He has been the cheerleader of Democratic party politics in Central Florida for decades,” Demings wrote. “Others came and went, but Doug was the standard bearer as Orange County flipped from majority Republican voters, to majority Democratic voters. I have nothing but admiration for the profound impact that Doug Head had on Florida politics.”

Dyer said Head “evolved” over time. The Mayor also remembered Head played a pivotal role in his turn to politics, when he first ran for the Senate in 1992.

“He had wisdom in the context of local politics, that was his forte,” Dyer said. “Doug Head was integrally involved in Democratic politics in Orange County and Central Florida and played a pivotal role in a lot of people’s political careers.”

“He never tired, over decades, of advancing a Democratic agenda as he saw it. And it didn’t bother him if that sometimes clashed with the views of Democrats in elected office,” said former Orange County Mayor Linda Chapin.

At the same time, Head was old-school, and could get along with Republicans even while opposing and criticizing them.

“Doug Head and I were, for many years, the heads of political warring tribes, but we were also, I think, friends,” wrote Lew Oliver, who chaired the Orange County Republican Party from 1999 to 2018. “We both started politics in less fractious times (which will hopefully return one day soon,) when it was possible to regard the other side as the ‘loyal opposition’ with whom a civil and respectful — even occasionally friendly cooperation was possible.”

“His party, his community and his country had a faithful servant, and I’ll miss him and the era he so honorably represented,’ Oliver added.

Head was born in Midland, Michigan. He served two stints in the Peace Corps in Paraguay where his sister, Meredy Jenkins, said he developed his belief that he could help bring about positive change in lives. In the 1980s he was executive director of an organization that lobbied for law changes so that AIDS patients might receive fair settlements of life insurance policies. At one point, Forbes Magazine identified him as one of the ten most powerful voices in the insurance industry, his sister recalled.

“He was very influential in making change, state-by-state, lobbying for better results, for fairer treatment, to make the laws more uniform so people weren’t getting ripped off,” Jenkins said.

He is survived by her, and by brother-in-law Dennis Jenkins, and by another sister, Barbara Cornelius, of Australia.

At Head’s request, there will not be a funeral.

nextLawmakers bring back bills to set up regulatory framework for cryptocurrency