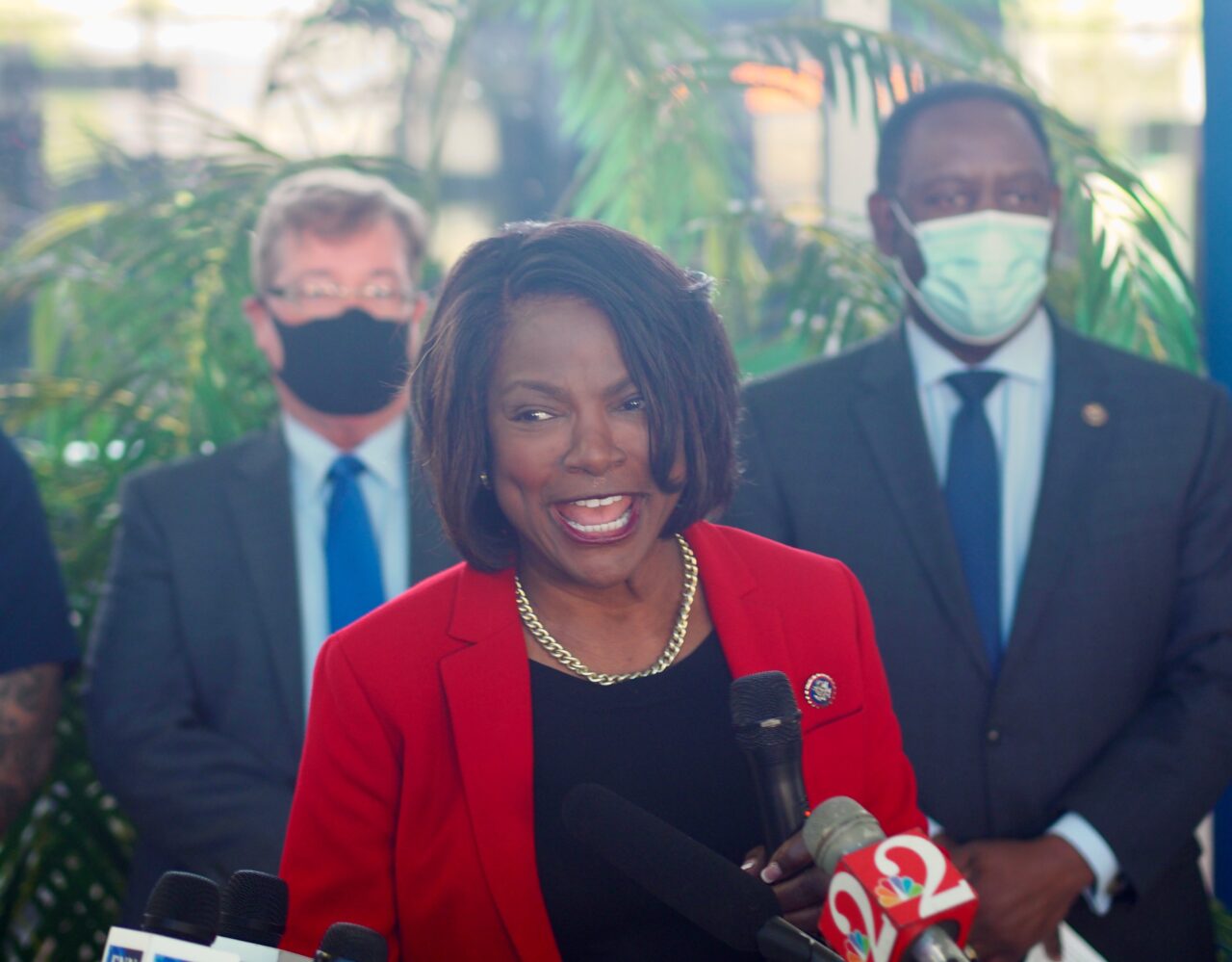 'We all know that here in Florida, transportation means everything.'

U.S. Rep. Val Demings, the leading Democratic candidate for next year’s U.S. Senate election, touted the $1.2 trillion bipartisan infrastructure bill Tuesday — laying the groundwork for a legislative vehicle she and other Democrats are likely to ride toward the 2022 election.

Demings joined her husband, Orange County Mayor Jerry Demings, and several other county and Orlando leaders to tout what federal money coming through the bill could do for Florida and particularly Central Florida, where roads, public transit, water, sewer and 21st century electrical infrastructure needs are in dire need.

“We all know that here in Florida, transportation means everything,” Demings said. “It is the lifeline that moves people.”

She avoided talking about the matter as a campaign issue until questioned, and even then avoided mentioning her likely opponent, Republican U.S. Sen. Marco Rubio. But she made clear she views this issue — the infrastructure money, and the Republicans, like Rubio, who voted against it — as a major campaign matter.

“This bill is in the best interest of Central Florida and all of the people who visit our great region. And anyone who understands the challenges we have in this community and voted against it has to be playing politics,” she said. “Look, when this bill passed, we won. Not win as in Democrats and Republicans who voted for it, but we as a community. We as a nation.”

The Senate approved House Resolution 3684, the Infrastructure Investment and Jobs Act, on Aug. 10 by a 69-30 vote, with 19 Republicans joining Democrats, while Rubio and U.S. Sen. Rick Scott voted no. The House approved it Nov. 5 by a 228-206 vote, with 13 Republicans voting yes. President Joe Biden signed it into law Nov. 8.

Rubio’s campaign responded by stating, “At a time of record inflation, Demings and her Democrat allies in Washington have yet to see an outrageous spending package they didn’t like. Only 25% of this bill goes toward traditional infrastructure, while the rest is corporate welfare to green energy companies and mass transit handouts to New York and California. That is par for the course for Demings, who last week voted to increase taxes on Florida families while giving millionaires and billionaires in blue states a tax cut.”

“I know the Republicans want us to play in that space,” said of such assertions.

She repeatedly stressed the plan is paid for, “by making people pay their fair share,” through taxes on large corporations and people making $400,000 a year or more, with no tax increases for people making less. And she charged Republicans’ tax bill in 2017 “benefited the richest people in this country” and drove up the national debt.

She argued infrastructure improvements, such as expanding sea ports like Jax Port in Jacksonville, should help, “so we can keep our goods moving, keep our services moving, so we can help drive down the costs of those products. We are concerned about what you have to pay, people who go to work every day diligently, but this legislation is paid for regardless of what some will tell you.”

They were light on specifics, though, as the bill’s allocations to individual states and communities remains unclear.

Whether that can begin to crystalize into things voters can specifically anticipate in time for the 2022 elections remains to be seen.

Mayor Demings said he would continue to press forward on his plan to raise the county sales tax by 1 percentage point to provide permanent, dedicated funding for buses, trains, and other transportation needs, which he said would not be covered by the federal infrastructure bill.

Yet he, Harrison, and Bullock expressed expectations that concrete-and-steel improvements from bus shelters to commuter rail lines, to utilities upgrades should be covered by the federal money.

And Delgado touted “good union jobs” that should prosper from the cash influx.