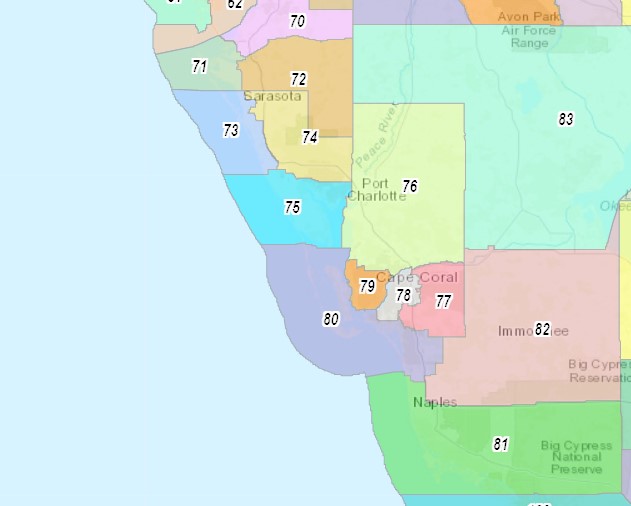 But the region may boast more representatives next year.

The first House maps for Southwest Florida show potential for intraparty battles. They also indicate the 10-county region’s only swing district will be as politically divided as ever.

So what are the political consequences of these draft proposals? It’s important to note the two draft maps released by the House Redistricting Committee both appear radically different, unlike the now nine drafts of Senate districts that show limited differences from one another. Lawmakers themselves, many whose political fate hangs in the balance of this once-a-decade process, expressed reluctance to comment on the maps.

Regardless, there’s plenty of speculation on what the maps mean for the region’s political future. Here are some of the most important consequences of lines drawn so far.

The region could lose its only majority-minority district. While House District 70 under existing maps extends from St. Petersburg south to parts of Manatee and Sarasota counties, neither of the House maps show the district reaching south of Hillsborough County. Instead, a newly envisioned House District 62 in both drafts covers portions of St. Petersburg, Tampa and Gibsonton. Notably, the district has long been represented by a Pinellas County representative; St. Petersburg Democrat Michele Rayner-Goolsby represents the area now. But the chance of a Palmetto or Newtown representative appear gone.

That means a number of Democratic neighborhoods in Manatee and Sarasota must be incorporated into otherwise Republican-leaning districts. That delivers the most consequence to Rep. Fiona McFarland, a Sarasota Republican representing the region’s one true swing district. Much of her existing House District 72 falls now within House District 73 in both maps. But a partisanship analysis by MCI Maps shows the district more competitive than the existing HD 72.

Such a split already has Democrats buzzing. Even under the current makeup, HD 72 was won by a Democrat, Margaret Good, as recently as November of 2018. Good ran for Congress unsuccessfully instead of seeking re-election last year, allowing McFarland a shot at an open seat. Both McFarland and Good politely declined comment on the new maps. But many Democrats found themselves waiting for another shoe to drop, expressing suspicion that Republicans, regardless of a need to comply with a Fair Districts amendment, would make the seat more of a battleground.

But this may not be the biggest challenge awaiting McFarland. One draft, H 8005, would actually put the Sarasota Republican in House District 74, represented now by Venice Republican James Buchanan. He lives in HD 74 under both draft maps, and intends to seek re-election. Asked where he intends to run, he told Florida Politics, “74, where I live and represent.”

While one map draft puts Buchanan in with McFarland, H 8007 puts Rep. Tommy Gregory, a Sarasota Republican, in HD 74. Gregory’s House District 73, meanwhile, effectively changes into House District 72 in both House drafts, retaining much of its current shape in Manatee County but shedding any parts of Sarasota County to dispose of overpopulation. That’s a safe Republican seat won by Trump with more than 58% of the vote, but one where no incumbent now lives. Gregory did not respond to a request for comment on where he might run.

The lines — or the incumbents — could move long before qualification week in 2022.

Local Republicans greeted the map with intrigue but overall optimism. Especially in the current political climate, Sarasota County Republican Party Acting Chair Jack Brill said he’s confident the GOP can win every seat in the county and send an all-red delegation to Tallahassee next fall.

“We appreciate all the hard work that the House Redistricting committee put into the maps,” Brill said. “We know that with either option, our team of incumbent legislators will be victorious and the Sarasota Delegation will remain Republican.”

The Manatee delegation, under both maps, would also see a new district come into the northern portion of the county. A new HD 70, which more closely represents Lithia Republican Mike Beltran’s House District 57, would now cross the Hillsborough-Manatee line.

The other high concentration area of population in the region stretches from the Fort Myers area in Lee County to the Naples area in Collier. While the region appears wall-to-wall Republican-heavy under both daft maps, there’s certainly political intrigue to be found.

Both maps show a House district that holds most of Cape Coral, though Florida’s 9th most populous city can longer be contained in a single district as it is with existing House District 77. The city falls in both drafts under a new House District 79, and that district notably brings in a portion of North Fort Myers despite shedding parts of Cape Coral into neighboring jurisdictions. That already has some questioning treatment of the city, especially the H 8005 map that cuts the 194,000-resident city into three separate House districts.

“At this stage, we have two preliminary maps that are vastly different for Lee County,” he said. “We need to allow the process to unfold before making any statement on the future other than I look forward to continuing to represent the people of Cape Coral.”

Roach also held back on predicting any outcome to the process. But he made clear he plans to seek re-election where the maps place him and not to start house hunting in a nearby jurisdiction.

“The reapportionment process is still in its infancy, and I think any speculation or conjecture about incumbent versus incumbent primaries is premature until the maps are finalized,” he told Florida Politics. “With that said, I intend to run in whichever district encompasses my current residence in North Fort Myers.”

House District 78, represented now by Fort Myers Republican Jenna Persons-Mulicka, would be more competitive under either draft map, but remain GOP-leaning. Trump won 53.4% of the vote there in 2020. Under the H 8005 draft, Trump won 51.8% of the vote and under H 8007, the Republican won 52.8%.

There’s more discussion among the consulting class that H 8005 makes the district cross the Caloosahatchee River, a major geographic feature. Also, that draft carves House District 80, the seeming derivative of current House District 76 represented by Estero Republican Adam Botana, from the barrier islands to a portion of Cape Coral inaccessible by land without driving through multiple other districts.

“I would like to see a district that is wholly contained in Cape Coral rather than cutting in and out of unincorporated Lee County,” said local political consultant Terry Miller.

Lee County as a whole ends up with more representation in the House than it has now, while less guarantee of all members living in the county. Both maps have a version of House District 76 that now includes east Charlotte County, which will have more than one representative for the first time in more than a decade.

A new House District, numbered HD 77 in both drafts, has also been included that covers east Lee, including Lehigh Acres, that currently houses no incumbent.

Both maps would have Botana’s district extend south into a small part of north Collier County. In H 8005, most of the Naples region, though, falls into the new House District 81. That vision of a coastal district looks close to the boundaries of existing House District 106. But both drafts move another Collier District inland. Rep. Lauren Melo, a Naples Republican, still lives in that district, now numbered House District 82 in either draft.

But in H 8007, the district is contained entirely north of Alligator Alley while the new HD 82 reaches inland as far as the Collier-Miami-Dade county line. In H 8005, Melo’s district covers most of inland Collier.

Unlike the coasts, inland Southwest Florida saw little growth in the last decade. But there’s still significant changes in the appearance of the Heartland districts.

Rep. Kaylee Tuck, a Sebring Republican, lives under both draft maps in a new House District 83. Unlike her current House District 55, this district extends westward to encapsulate all of Hardee county.

Meanwhile Rep. Melony Bell loses any Southwest Florida constituency. The Fort Meade Republican would live in House District 50 under either map and be contained entirely within Polk County on the I-4 corridor.

Okay, here's a thread on SWFL kneejerk observations on the House legislative maps, our first look at how Florida's 120 state House districts could look: https://t.co/AAd3P2Lk1X