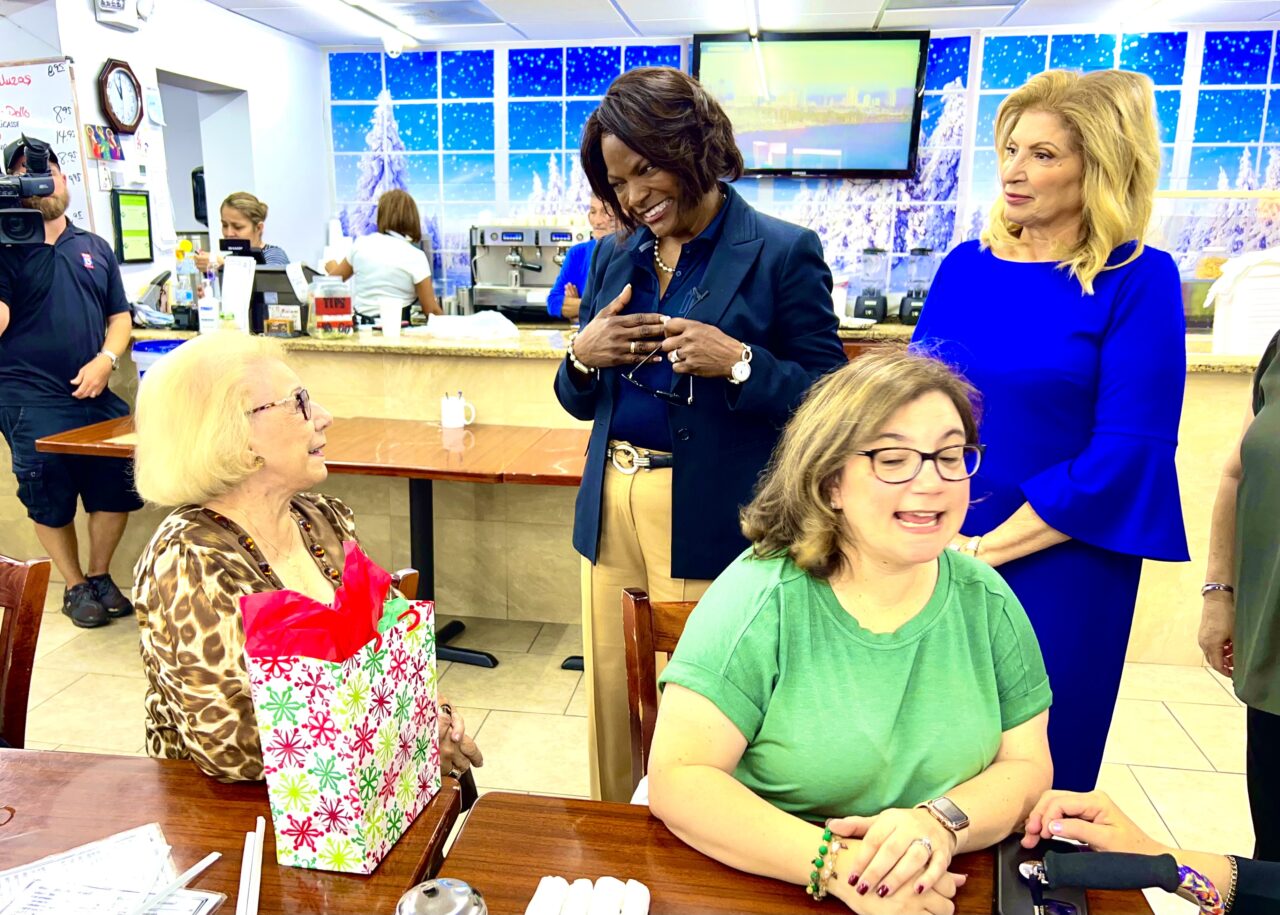 Bella Canasi has had a lot of birthdays. Saturday was her 93rd.

And like most Saturdays, the Cuban-born Canasi who’s lived in Tampa since 1961, sat a long table in West Tampa’s Arco Iris Restaurant & Cafe with her family, sometimes five generations of them, for some cafe con leche, tostada cubano, huevos con salchicha and maybe a few plantanos.

But this year, she got a special serenade as well.

“All right, are we doing this?” Orlando-area U.S. Representative and Democratic Senate candidate Val Demings asked. “We’re doing this together.”

Then, Demings and state Sen. Janet Cruz, standing just behind her, leaned into Canasi and sang the Happy Birthday song as the great-great grandmother looked up smiling.

“That was so exciting,” Canasi said.”I feel like I’m more popular than the mayor right now.”

The Arco Iris stop was Demings’ first in West Tampa and part of a day spent in the Bay Area that featured planned meetings with Tampa Mayor Jane Castor and Mayor-elect of St. Petersburg Ken Welch. The trip culminated in an evening campaign event for Cruz.

West Tampa is one of the city’s oldest neighborhoods and still largely populated by the Cubans and Latinos who settled in the area in the early 20th century. Demings, a former police chief, is running against incumbent U.S. Sen. Marco Rubio in 2022. A November statewide poll from St. Pete Polls showed Rubio leading Demings 51% to 44% with about 5% of respondents undecided. When it comes to Latino voters, the Miami-born Cuban gains a few more points over Demings, leading her 54% to 41%.

Florida’s Latino vote, once seen as a monolith and now acknowledged to be deeply nuanced itself, has been coveted by Democrats who have struggled recently to hold the vote. Led largely by South Florida, Donald Trump was able to secure 55% of the Latino vote as part of his unsuccessful re-election bid.

But Demings said she’s confident she can reach the oft-socialist wary Cubans and Venezuelans who’ve moved further right, along with the more moderate, left leaning Latino groups like Puerto Ricans. Demings said her experience as a social worker and law enforcement officer for 27 years allowed her to learn how to communicate with varied communities

In Puerto Rico she said, that includes continued recovery from crippling debt and devastating storms

“We support their quest for freedom on the island. And to hear their stories about how the generations, how they still have family that are in Cuba and how they’re certainly very concerned about access to the internet,” Demings said. “When they send money, their families being able to receive that money and it not being skimmed off the top by the government. Making sure we support our protestors. That they’re not subject to violence… And as an elected representative, certainly in the Senate, we have to be directly responsible or responsive to them.”

And as far as Canasi is concerned, Deming can count on at least one vote from a Cuban.