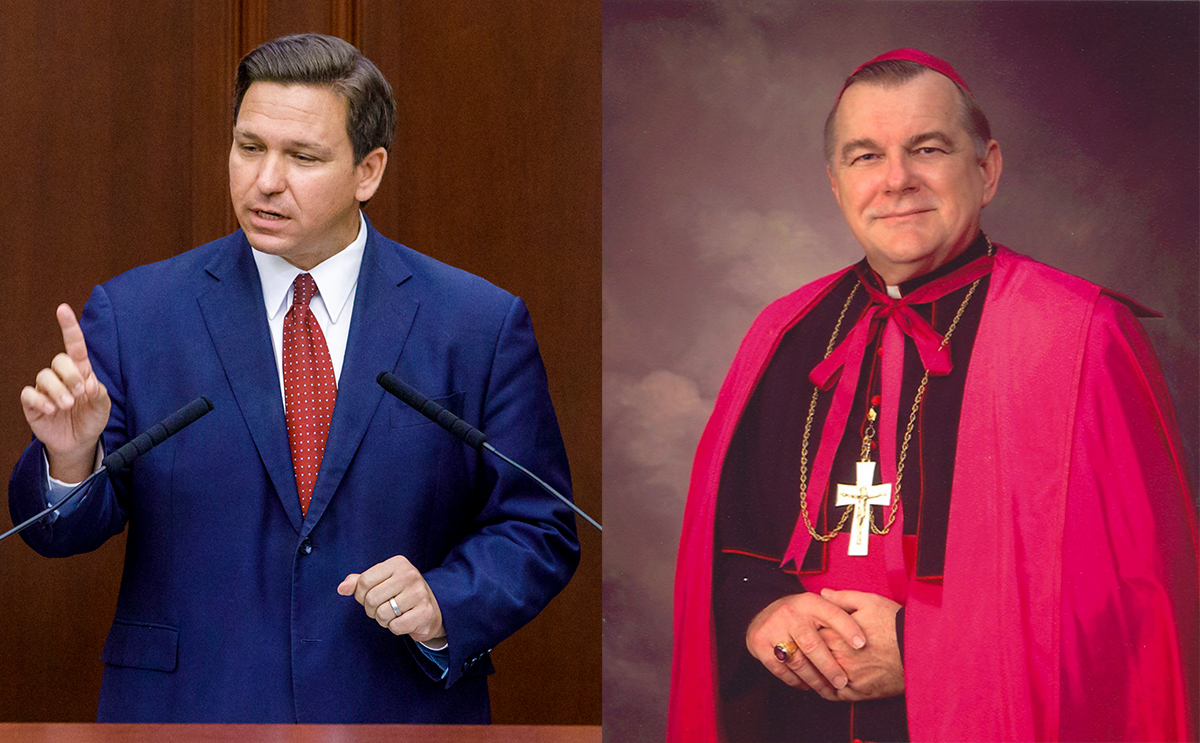 The leader of nearly 5 million South Florida Catholics called Gov. Ron DeSantis’ latest executive order regarding immigrants “wrong” and called on the lawmakers not to compound the error by approving related legislation.

DeSantis’ order, issued Dec. 10, could. take away the state license of the 60-year-old home run by the Archdiocese of Miami where about 50 unaccompanied, undocumented immigrant children are staying, according to archdiocese officials.

The home just celebrated its 60th anniversary last weekend, archdiocese officials said. Then known as “Boys Town,” it was a part of resettling some 14,000 unaccompanied Cuban minors.

The former residents’ contributions to Florida and beyond, Wenski wrote, “show that magnanimity rather than mean-spiritedness is a ‘best practice’ to resolve immigration challenges.”

Christina Pushaw, the Governor’s spokeswoman, said that homes like the one the Archdiocese of Miami runs will have a 45-day grace period starting Dec. 10 for the transition to this new emergency rule. It’s part of DeSantis’ effort to stop what she called the clandestine resettlement of illegal aliens. The Governor is standing up for Floridians because President Joe Biden and the federal government are not enforcing immigration laws and properly vetting the incoming children, Pushaw said.
“We hope this action will serve as a deterrent to the Biden Administration’s massive human smuggling operation,” she wrote in an email.

She said that the way these homes are being paid —a fraction of what Florida pays its child home providers ­for American children who need homes — is creating an incentive for the wrong policy.

Peter Routsis-Arroyo, CEO of Catholic Charities of the Archdiocese of Miami, said he is trying to work with the DeSantis administration to keep the home’s doors open and its license current. He said he is struggling to understand why the home has become a target after so many years.

“it’s part of our mission — it’s who we are,” Rousis-Arroyo said. “It’s taking care of the most vulnerable children that there are. Parents who are sending their kids with the hope of a better life — these are parents who are no different from any other parent anywhere.”

The emergency rule decreeing this change in status for facilities like the Archdiocese of Miami’s says that more than 11,145 of these unaccompanied minors were settled in Florida during the federal fiscal year 2021 and another 1,190 were placed in the state during the current fiscal year. It also cites the failures of the federal government to properly monitor and vet these newcomers and a murder charge against a recently-arrived Honduran man who provided false ID to police that said he was 17, according to news reports.

Pushaw, in the Governor’s office, said she challenges the archbishop’s parallel between the immigration surge happening now with the Cubans who came to Miami 60 years ago.

She said the unaccompanied minors coming here are not really refugees because a refugee is someone who flees his or her country to escape persecution and seeks refuge in the nearest safe place.

“Florida shares a maritime border with Cuba, which is a Communist dictatorship known for human rights abuses,” Pushaw wrote. “Therefore, Cuban nationals of any age who cross the maritime border to come to Florida are likely to have a valid asylum claim. Mexico is considered a safe country, yet migrants from 100 countries have gone to Mexico and then crossed the Mexico-U.S. border illegally this year.”

The archdiocese’s Routsis-Arroyo sees this population having a lot in common with the Cubans who arrived on Miami’s shores in 1960.

“The Cubans at that time were under a tremendous, tremendous crisis similar to what’s going on in Central American and South American countries right now,” he said.

Pushaw left the door open for some pathway for the Miami facility to remain open, however.

“The new DCF (Department of Children and Families) emergency rule does indicate that a license might be granted for a state facility housing unaccompanied minors only if the state of Florida and the federal government were to enter a cooperative agreement requiring the Biden Administration to consult with Florida’s state government in advance of any resettlement operation,” she said. “This would require the federal government to agree to share information with the State of Florida regarding unaccompanied minor resettlement.”