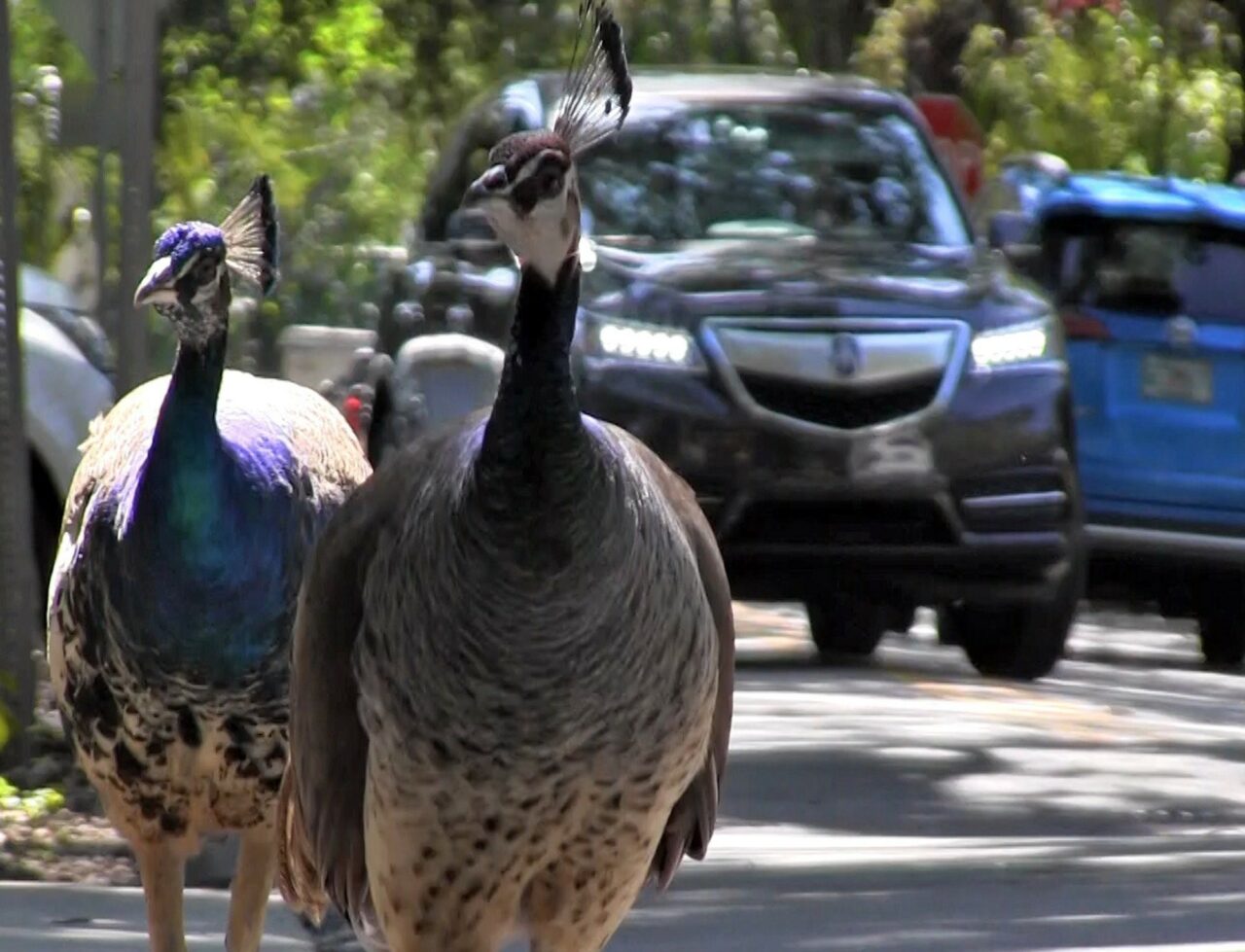 Residents have cried 'fowl' over the invasive birds for years.

Peacocks and peahens living within municipal borders in Miami-Dade County could face relocation or extermination as a result of an ordinance that narrowly passed Tuesday.

The Miami-Dade Commission voted 5-4 for an item by Raquel Regalado allowing cities to develop individualized mitigation strategies to rid themselves of the pretty-to-look-at but bothersome and invasive birds.

Before the change, it was a violation of the county code for any person to take any peafowl, with “take” meaning “taking, attempting to take, hunting, molesting, capturing, or killing any peafowl, their nests or eggs, by any means.”

While that rule still stands, municipalities may now develop “peafowl-mitigation plans” to take to the County Commission for approval on a case-by-case basis. Such plans can include killing the birds.

“They need to be allowed to come up with a peafowl-mitigation plan to move them off-property if they’re damaging (property) or, in some cases, putting themselves in danger,” she said. “This is just allowing the municipalities to take that step.”

Her ordinance originally would have deleted the section of the county code protecting peafowl, but after several commissioners voiced opposition to the move, she amended her item to let cities develop plans for the Commission to approve or deny.

Danielle Cohen Higgins was the first to point out that removing protections for the birds would open the possibility to kill them. One of the municipalities Cohen Higgins represents, Palmetto Bay, adopted an ordinance in January designated the village as a “bird sanctuary.”

“In my district, we’ve learned to live with these peacocks,” she said. “They almost become a part of the community. And I know my residents, they lose it when anybody harms any of these peacocks.”

Jean Monestime said the small number of peafowl in his district act as a natural traffic-calming solution.

“My neighbors love them,” he said. “When they’re in the road and they open their wide feathers, everybody stops to look at them (and) take pictures … and I don’t think they’re nuisances to anyone in that sense. I haven’t heard any complaints.”

But after further talks, a staff member from the Animal Services Department confirmed the county had not been able to identify a sanctuary anywhere in the state where peafowl could be safely confined.

“There’s no interest,” she said. “So, the alternative would be humane euthanasia.”

She said humane euthanasia includes carbon dioxide poisoning and cervical dislocation, which involves applying pressure to the neck to separate the spinal column from the skull or brain.

Regalado noted the city of Miami’s move last year to amend its charter so excess peafowl could be trapped and removed from their city using a humane management plan implemented by Ranchos Palos Verdes, California.

At the time, Miami Commissioner Ken Russell cited the birds’ propensity for damaging property as a reason for his sponsoring the city ordinance. They poop everywhere, scratch up car paint with their feet and beaks and devour flowers.

Almost anyone who has lived near them can mimic their blaring, atonal squawk, which they let loose at all hours of the day and night.

The countywide conversation of the birds dates back more than half a decade, when Regalado’s predecessor on the Commission dais, former Miami Mayor Xavier Suarez, successfully sponsored a resolution asking then-county Mayor Carlos Giménez to develop a solution.

There isn’t an easy fix, however, since the Florida Fish and Wildlife Conservation Commission prohibits releasing nonnative species into the wild. That means the only workaround is to either kill the birds or find an inescapable place to put them.

The contentious issue was even the subject of a 10-minute film by University of Miami faculty members Edward Julbe, Gina Presson and Ben Ezzy last year called “Peafowl Predicament: Friend or ‘Foul’?” It can be viewed below.