At Olympics and beyond, getting away with it is Russia’s way 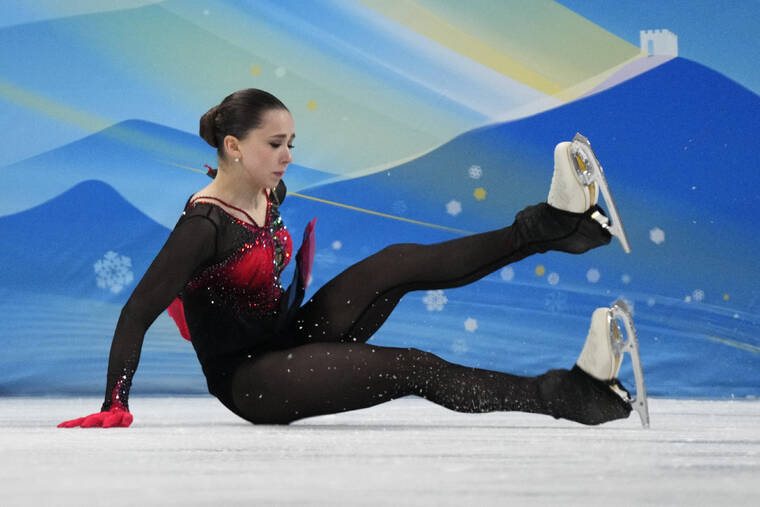 No matter how the International Olympic Committee tries to spin it, the enduring symbol of the Beijing Games — and really, the entire Olympic movement — is a sad little girl put in an untenable position by adults who have no shame.

A lot of serious issues will need to be addressed after the flame is extinguished, from doping rules to age limits to tyrannical coaches, but we shouldn’t lose sight of the bigger questions:

What will it take for the Olympics to truly live up to its ideals?

Is meaningful change even possible at this point?

“Who will save Olympic and Paralympic sport in our time?” asked Max Cobb, the president and CEO of the U.S. biathlon program. “I don’t think the movement can take many more years of this doubted authenticity before its value is so eroded that other interests eclipse it and it’s lost for another millennia.”

Kamila Valieva flew away from the Winter Olympics on Friday, her dreams crushed at the tender age of 15, and there’s no reason to think she’d ever want to return after what she went through in Beijing.

The Russian child — and let’s not lose sight that she is just a child — shouldn’t have been allowed to compete in women’s figure skating after testing positive for a banned heart medication.

But compete she did, setting up the heartbreaking spectacle of a gold medal favorite, thoroughly overwhelmed by the scrutiny of the past two weeks, stumbling and bumbling and tumbling completely out of the medals on an extraordinary night at the Capital Indoor Stadium.

As difficult as it was to watch, maybe it was a good thing it happened. The hypocrisy of the Olympic movement has never been more apparent than those four minutes when the world came together to watch a train wreck in real time.

Each time Valieva botched a jump, the images should’ve flashed through our consciousness.

The Olympics being held in a country accused of genocide against its Uyghur minority. The Russians getting one pass after another despite repeated doping violations and cover-ups. Sponsors concerned only with their bottom lines. The IOC turning a blind eye to it all, content with the status quo as long as it comes with first-class flights, five-star hotels and per diems that are more than some people make in a year.

If anyone tried to turn away, they should’ve had their eyes pried open like Malcolm McDowell in “A Clockwork Orange.”

IOC President Thomas Bach took to the microphone the morning after the figure skating debacle to feign all sorts of outrage at the way things went down, which should carry about as much weight as one of Kanye’s Twitter rants.

“I must say I was very, very disturbed when I watched the competition on TV,” Bach said, trying to sound earnest. “To see her there struggling on the ice, seeing how she tries to compose herself again, how then she tries to finish her program, you could in every movement in the body language, you could feel that this is an immense, immense mental stress and maybe she would have preferred just to leave the ice and try to leave this story behind her.”

Of course, Bach and his minions at the IOC would love nothing more than to leave this story behind.

Rest assured, in the days and weeks and months to come, they’ll speak glowingly of their 2 1/2 weeks in China, undoubtedly portraying Valieva as a mere blip in another hugely successful games. Once all the checks clear, they’ll tally up their profits and look giddily toward an even bigger haul in Paris, two years downs the road, when hopefully the scourge of COVID-19 has waned.

We can’t let them get away so easily.

The Olympic movement needs a total reset of its priorities, which probably won’t happen until big-money sponsors and influential broadcasters such as NBC actually threaten to put away their checkbooks.

″It’s time for NBC, Visa, Proctor & Gamble, Alibaba and all the rest to step in and get this right for the athletes,” said Travis Tygart, CEO of the U.S., Anti-Doping Agency. “Enough fence-straddling by companies that financially prop up the Games. They’re the real power and they need to step in and do the right thing for athletes.”

Tygart’s main focus is the doping code that was largely a sham in Beijing. Valieva’s youth — and the special treatment if afforded her under the rules — has already led to calls for raising the minimum age of Olympic athletes to 18.

That’s a start, but only the tip of an enormous iceberg. The system seems largely designed to protect the dopers, at the expense of those athletes who try to do things the right way.

“With probably well over $100 million spent on global anti-doping efforts annually, how did all that well-intended effort leave athletes and the sport-loving public so utterly unsatisfied, disillusioned and feeling that the integrity of sport hangs in the balance right now?” Cobb rightly asked.

Don’t be distracted by the shiny object the IOC is already trying to throw our way, to distract us from the bigger, systematic issues.

Yes, Valieva’s bully of a coach, Eteri Tutberidze, deserves all the scorn we can muster for the way she treated the crestfallen teen coming off the ice. “Why did you let it go? Why did you stop fighting?” Tutberidze asked Valieva, like a shark circling its prey.

“When I afterwards saw how she was received by her closest entourage, with such a what appeared to be a tremendous coldness, it was chilling to see this,” Bach said.

Even more chilling is what the Olympic movement has become.

The whole world saw it during four pathetic minutes in Beijing.

Paul Newberry is a national sports columnist for The Associated Press. Republished with permission from AP.

nextSunburn — The morning read of what’s hot in Florida politics — 2.18.22