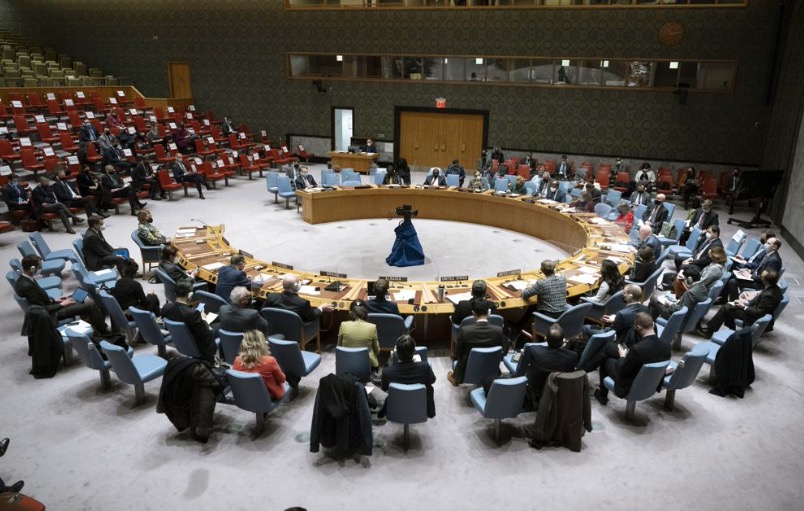 With the smell of war in the air, Germany made the first big response.

With the smell of war in the air over Europe, world leaders got over the shock of Russian President Vladimir Putin’s order to deploy troops to separatist regions of eastern Ukraine and they are focused on producing as forceful a reaction as possible.

Germany made the first big move, taking steps to halt the process of certifying the Nord Stream 2 gas pipeline from Russia — a lucrative deal long sought by Moscow, but criticized by the U.S. for increasing Europe’s reliance on Russian energy supplies.

The West insisted Putin’s bold moves in Ukraine violated countless international agreements and since the words of diplomacy had failed, it was time to move towards action.

With Western powers long having made clear that the fate of Ukraine wasn’t worth a hot and direct military confrontation with Russia, and the potential of a world war, sanctions were the only, limited, option to crystalize their anger.

“No lows too low, no lies too blatant, no red lines too red to cross,” Lithuanian Prime Minister Ingrida Simonyte said in summing up the political disgust felt from Europe to North America and democracies hugging Russia’s borders in Asia like Japan and South Korea.

However, Putin continued to knock the world off-kilter with a strategy where confusion about the true extent of an invasion, which would automatically kick in major sanctions, remained unclear and debatable.

“I wouldn’t say that’s a fully-fledged invasion, but Russian troops are on Ukrainian soil,” Borrell said.

The latest developments were enough to force the 27-nation bloc into a mode of high alert, and the EU’s foreign ministers would be deciding later Tuesday on how deep a first batch of sanctions would have to cut.

It would likely stop far short of the “massive” package threatened by the EU and Washington for a full military invasion into national territory that Kiev still controls.

“The way we respond will define us for the generations to come,” Simonyte said.

Too much too soon, though, could also hurt the international response, Austrian Chancellor Karl Nehammer said.

“There is a variety of sanctions options that now need to be used in a targeted way, because we have to assume that we haven’t yet reached the peak of the escalation,” he said.

A conflict could devastate Ukraine and cause huge economic damage across Europe, which is heavily dependent on Russian energy. But Asian nations are also worried.

President Moon Jae-in instructed his officials to prepare for the economic fallout in South Korea if the Ukraine crisis worsens and U.S.-backed nations levy stringent economic sanctions on Russia.

Hopes are dwindling that a major conflict can be averted. Putin’s directive came hours after he recognized the two Ukrainian separatist regions, setting up Russian military support and antagonizing Western leaders who regard it as a breach of world order.

Putin blamed NATO for the current crisis and called the U.S.-led alliance an existential threat to Russia.

The global condemnation came amid rising skirmishes in the eastern regions of Ukraine that Western powers believe Russia could use as a pretext for an attack on the Europe-facing democracy that has defied Moscow’s attempts to pull it back into its orbit.

New Zealand Foreign Minister Nanaia Mahuta said there was no basis under international law for Putin to recognize the Ukrainian separatist regions.

“We are concerned that this is a calculated act by President Putin to create a pretext for invasion, which would be a clear act of aggression. We again call for urgent diplomatic efforts to find a peaceful resolution,” Mahuta said in a statement.

Those on a saddle between Russia and the West were in an uncomfortable position.

NATO-member Turkey, which has close relations to both Ukraine and Russia, criticized Moscow’s decision to recognize the independence of the regions in eastern Ukraine.

“We consider this decision by Russia as being unacceptable,” Turkish President Recep Tayyip Erdogan said. “We reiterate our calls to the parties to respect common sense and international law.”

China, a traditional ally of Russia, sounded a cautious note, calling for restraint and a diplomatic solution to the crisis.

Washington could be much more straightforward. The White House issued an executive order to restrict investment and trade in the separatist regions, and additional measures — likely sanctions — were to be announced Tuesday. Those sanctions are independent of what Washington has prepared in the event of a Russian invasion, according to a senior administration official who briefed reporters on the condition of anonymity.

With an estimated 150,000 Russian troops massed on three sides of Ukraine, the U.S. has warned that Moscow has already decided to invade. Still, President Joe Biden and Putin tentatively agreed to a meeting brokered by French President Emmanuel Macron in a last-ditch effort to avoid war.