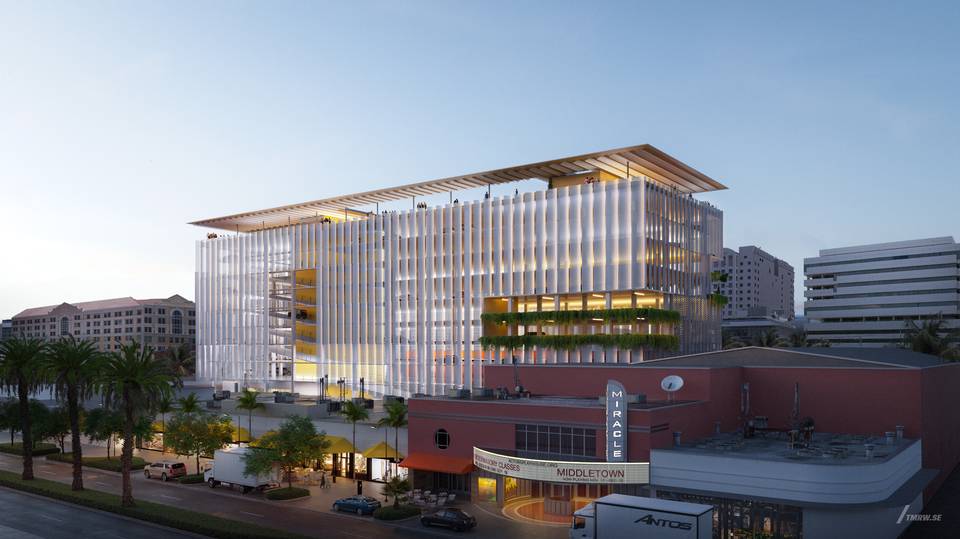 Coral Gables needs to break ground on the project by Sept. 30 or risk losing control of the property.

Coral Gables will receive a $975,000 match in state funds for the electric vehicle charging and solar power components of a planned parking garage and mobility hub development in the heart of the city.

The money, which Coral Gables agreed to match for a total $1.95 million set aside in state and local funds, will go toward building publicly accessible EV charging stations that will double as parking spaces on the 10-story structure’s ground floor. It will also fund the installation of photovoltaic panels, which will help to power the facility.

Those components are “a critical part of the project” and will “drastically reduce vehicular emissions in the city,” “power lighting within the hub” and “energize the activated rooftop,” according to a funding request Coral Gables Intergovernmental Affairs Manager Naomi Garcia filed in October through Busatta Cabrera’s office.

The building is to rise at 245 Andalusia Ave. within walking distance of Coral Gables’ main commercial strip, Miracle Mile. All but one of its levels will offer parking across 700-plus spaces designed to accommodate self-driving vehicles.

“The mobility hub will be a one-stop-shop for all things mobility,” the funding request said, adding that its “ample parking” will reduce traffic congestion in the city and that its many alternative transportation options “will encourage people to move around without a car.”

As detailed in Miami Today, Coral Gables paid architecture firm Gensler $2 million to design the structure. The city has hired the Weitz Company to manage construction.

But the clock is ticking, according to the Miami Herald. Coral Gables must have shovels in the ground by Sept. 30 or risk losing control of the property to developers Related Group and The Allen Morris Co., which vied in 2017 to build a massive apartment tower and garage on the land before the city intervened.

The project hasn’t evaded criticism. In December, Coral Gables Commissioner Rhoda Anderson suggested sending its designs back for further review. Her peers on the city dais rejected the request.

More than 1,000 locals have signed a petition opposing the “mammoth futuristic parking garage.” Its organizer, Maria Cruz, contends the building’s ultramodern motif and size clash with the Mediterranean aesthetic of the rest of the city.

previous'Our newspapers are struggling as it is': Florida Legislature passes bill shifting public notices away from legacy media