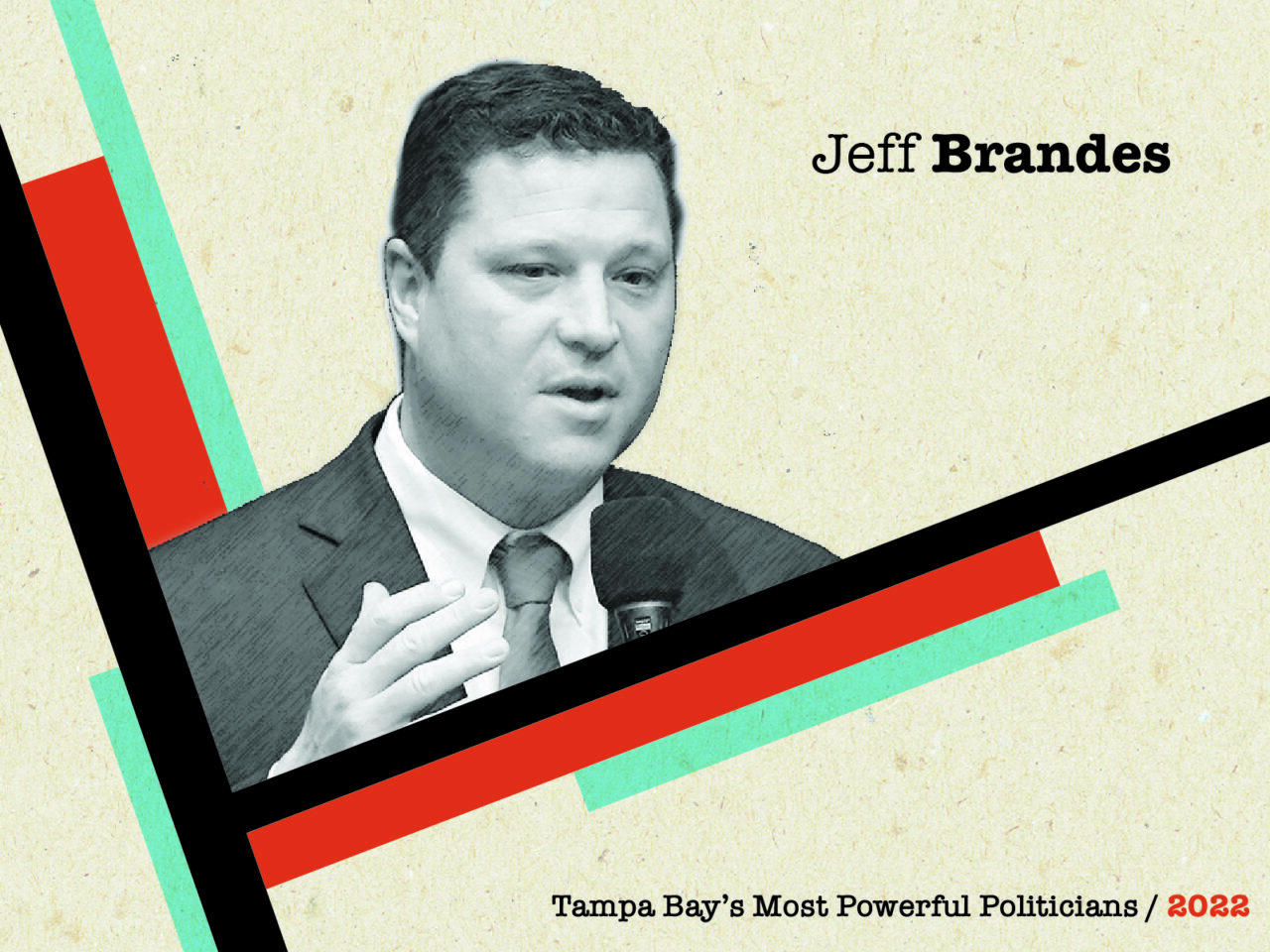 The so-called maverick might be leaving the Legislature, but it'll be surprising if the TBMPP mainstay leaves this list.

Sen. Jeff Brandes might genuinely be the sort of pragmatic, everyman politician that some executive-level Republicans have claimed they are.

The same moves that might’ve cost him some on-page power in Tallahassee have made him a mainstay on the list of most powerful bay area politicians. Last year, he ranked seventh. Brandes is known for voting by principle, not party. Though firmly entrenched in the GOP, Brandes has never shied from standing up to even clear directives from his party’s leadership in moves that sometimes leave his own aides guessing.

“He’s the former Supreme Court Justice Anthony Kennedy, but in the Legislature — except that his vote never breaks any ties,” WFLA’s Evan Donovan said. “Still, voting in line with, and standing up for, what you believe in: what a novel concept in 2022.”

Kennedy, appointed by Republican President Ronald Reagan, was, like Brandes, considered a libertarian by many and known to earn the ire of conservatives. Brandes once lost his seat as chair of the Senate Judiciary Committee after opposing a $2.8 billion cut from the state’s corrections budget. Senate President Wilton Simpson quickly reassigned him to a different committee.

During the 2022 Legislative Session, Brandes was one of two Republicans to break ranks a measure critics have dubbed the “Don’t Say Gay” bill (HB 1557). The bill limits instruction on sexual and gender identity in public schools. Brandes went so far as to back a Democrat-supported amendment to change the bill’s language to eliminate all sexual instruction in grades K-3, rather than single out sexual orientation and gender identity. The amendment was defeated during a committee stop in a party-line vote, save for Brandes.

He also broke ranks on the anti-net-metering bill on its way to the Governor that would remove an incentive making installing residential solar panels more cost effective. The bill’s sponsors said it ends a subsidy non-solar customers pay for despite refusing to support a study on whether there was a need to make any changes. Opponents said it will chill the residential solar industry in the state.

And Brandes laid into fellow Republican Sen. Travis Hutson over a bill to limit Soil and Water Conservation District Board membership to farm owners or their employees. He told Hutson the bill was so not-ready-for-prime-time that it “wasn’t even ready for t-ball.”

But while he broke ranks and swung toward the left on energy, transportation and education issues, he juked again, supporting Florida’s 15-week abortion ban.

“Sen. Brandes has always been willing to tackle tough or sensitive issues since he has been in the Legislature. He has been called a maverick because he is willing to challenge the norm or seen to go against the grain,” Shawn Foster of Sunrise Consulting said. “I believe he is a thoughtful leader and is willing to dive deep into the issues. Sen. Brandes has been a presence in the Capitol, but I don’t think we have seen the last of him.”

The son of a Vietnam-era Marine, Brandes — himself a veteran of Iraq and an officer with the Army Reserve — has said it instilled him with a clear-cut idea of right and wrong. The strategy has helped him win over moderates, independents and swing voters in a district that largely encompasses the blue St. Petersburg.

Over 11 years in the Legislature (the first two in the House), Brandes’ views have been seen as forward-thinking, especially when it comes to transportation. His micro-mobility bill made electric scooters legal on Florida roads, a law that helps Florida cities, including Tampa, launch e-scooter projects. Brandes also stayed true to defending home rule in his bill, leaving the details of e-scooter programs up to individual cities. And he previously supported bills that helped ride-sharing companies like Uber continue to operate in Florida.

“Throughout his 11 years in the Florida Legislature, Sen. Brandes has always sought out innovative solutions and taken a forward-thinking approach,” RSA Consulting’s Natalie King said. “He has been a champion for criminal justice reform, autonomous vehicles and expanding access to health care, and his passion and tenacity for these issues has earned the respect of his constituents and certainly made its mark on the Florida Senate.”

Brandes’ Senate career might be over, but a future spot on the list — if even with a new honorific — would surprise few.

Joe Henderson’s take: Tallahassee is going to miss this guy as he is term-limited out of the Florida Senate. This moderate Republican has shown backbone plenty of times against his own party leadership when he feels it’s warranted. We need more of that, but unfortunately, we’re about to have less.

previousNo. 17 on the list of Tampa Bay’s Most Powerful Politicians: Pat Kemp

nextLast Call for 3.29.22 — A prime-time read of what’s going down in Florida politics