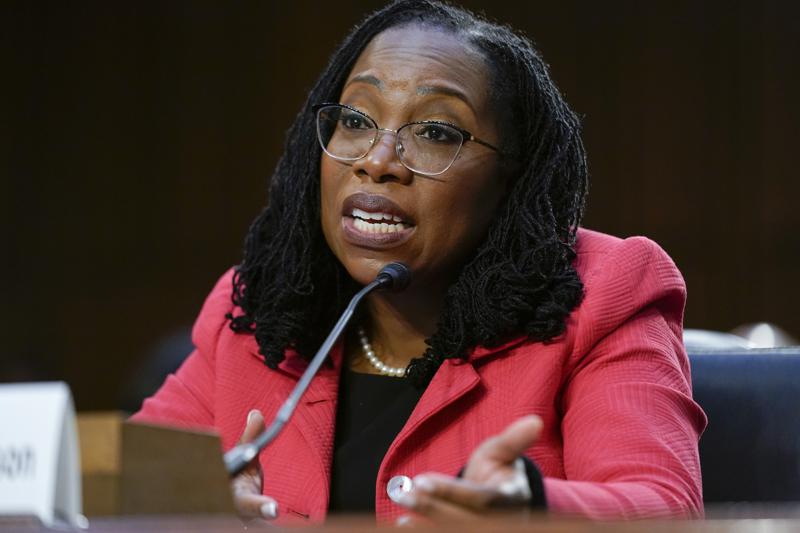 Democrats who control the Senate by the slimmest of margins hope to wrap up Jackson’s confirmation before Easter.

Facing Republican Senators’ pointed questions, Supreme Court nominee Ketanji Brown Jackson forcefully defended her record as a federal judge Tuesday and declared she will rule “from a position of neutrality” if confirmed as the first Black woman on the high court.

Jackson responded to Republicans who have questioned whether she is too liberal in her judicial philosophy, saying she tries to “understand what the people who created this law intended.” She said she relies on the words of statutes but also looks to history and practice when the meaning may not be clear.

She pushed back strongly against suggestions that she has given light sentences to child pornographers.

Could her rulings have endangered children? “As a mother and a judge,” she said, “nothing could be further from the truth.”

She described looking into the eyes of defendants and emphasizing the lifelong effects on victims. She said it is “important to me to represent that the children’s voices are represented.”

Tuesday’s hearing was the first of two days of questioning after Jackson and the 22 members of the panel gave opening statements on Monday. On Thursday, the committee will hear from legal experts before an eventual vote to move her nomination to the Senate floor.

Barring unexpected developments, Democrats who control the Senate by the slimmest of margins hope to wrap up Jackson’s confirmation before Easter, though Breyer is not leaving the court until after the current session ends this summer.

In what Judiciary Committee Chairman Dick Durbin described as “a trial by ordeal,” Jackson answered questions right off the bat that attempted to deflect GOP concerns and also highlight the empathetic style that she has frequently described when she is handing down sentences. Republicans planned to use their questioning to brand Jackson — and Democrats in general — as soft on crime, an emerging theme in GOP midterm election campaigns.

Jackson told the committee that her brother and two uncles served as police officers, and “crime and the effect on the community, and the need for law enforcement — those are not abstract concepts or political slogans to me.”

She also defended work she did around 15 years ago as a public defender and later in private practice representing four Guantanamo Bay detainees. While some Republicans have complained that Jackson was defending terrorists, she noted that defenders don’t pick their clients and are “standing up for the constitutional value of representation.” Jackson said she continued to represent one client in private practice because her firm happened to be assigned his case.

She appeared taken aback during further questioning on her detainee work from Texas Sen. John Cornyn, who asked why she would have called former Secretary of Defense Donald Rumsfeld and former President George W. Bush “war criminals” in a legal filing. “It seems so out of character for you,” Cornyn said.

Jackson said she didn’t remember “that particular reference,” but that she would look into it. After a break, Durbin noted — and Jackson confirmed — that she had filed petitions that made a variety of claims arguing for the release of Guantanamo detainees, including that the treatment of the detainees constituted torture and violated federal law. She never referred to anyone as a war criminal, but she did argue that torture amounted to a war crime under the law and that the federal government, including Bush and Rumsfeld, was ultimately responsible.

She bristled at questions from South Carolina Sen. Lindsey Graham, who voted for her confirmation as an appeals court judge last year but has openly expressed his frustration after President Joe Biden picked her over a South Carolina judge. Graham asked her about her religion, and how often she goes to church, in angry comments about what he said was unfair criticism of Justice Amy Coney Barrett’s Catholicism ahead of her 2020 confirmation.

Jackson — who thanked God in her opening statement and said that her faith “sustains me at this moment” — responded that she is a Protestant. But she said she is reluctant to talk about her faith in detail because “I want to be mindful of the need for the public to have confidence in my ability to separate out my personal views.”

Democrats have been full of praise for Biden’s Supreme Court nominee, noting that she would not only be the first Black woman but also the first public defender on the court, and first with experience representing indigent criminal defendants since Justice Thurgood Marshall.

Durbin said that to be first, “often, you have to be the best, in some ways the bravest.”

Biden chose Jackson in February, fulfilling a campaign pledge to nominate a Black woman to the Supreme Court for the first time in American history. She would take the seat of Justice Stephen Breyer, who announced in January that he would retire after 28 years on the court.

Sen. Cory Booker spoke emotionally about the “joy” he felt about her historic nomination and acknowledged her family’s pride. Jackson would be the third Black justice, after Marshall and Clarence Thomas, and the sixth woman.

Booker, who is Black, said the white men who have sat on the Supreme Court for two centuries were “extraordinary patriots who helped shape this country” but that many people could have never dreamed of sitting on the court.

Jackson, who grew up in Miami, noted that she did not have to attend racially segregated public schools like her own parents did, “and the fact that we had come that far was to me a testament to the hope and the promise of this country, the greatness of America that in one generation we could go from racially segregated schools in Florida to have me sitting here as the first Floridian ever to be nominated to the Supreme Court of the United States.”

On Monday, Democrats on the Judiciary panel sought to preemptively rebut Republican criticism of Jackson’s record on criminal matters as a judge, as a federal public defender and a member of the U.S. Sentencing Commission, an independent agency created by Congress to reduce disparity in federal prison sentences.

Jackson “is not anti-law enforcement” and is not “soft on crime,” Sen. Patrick Leahy said, noting that her support from some national police organizations. “Judge Jackson is no judicial activist.”

Questions about her sentences for child pornographers first came from Sen. Josh Hawley, who said in his opening statement that his research showed that she had a pattern of issuing lower sentences in child pornography cases, repeating comments he wrote in a Twitter thread last week. The Republican National Committee echoed his claims in blast messages to supporters.

The White House, along with several Democrats at the hearing, has rejected Hawley’s criticism as “toxic and weakly presented misinformation.” Sentencing expert Douglas Berman, an Ohio State law professor, wrote on his blog that Jackson’s record shows she is skeptical of the range of prison terms recommended for child pornography cases, “but so too were prosecutors in the majority of her cases and so too are district judges nationwide.”

Hawley is one of several committee Republicans, along with Ted Cruz of Texas and Tom Cotton of Arkansas, who are potential 2024 presidential candidates, and their aspirations may collide with other Republicans who would prefer not to pursue a scorched-earth approach to Jackson’s nomination.

The White House said Tuesday that Biden had watched part of the hearings and was proud of Jackson’s “grace and dignity.”

nextEric Engelhart files as a Democratic candidate in HD 77