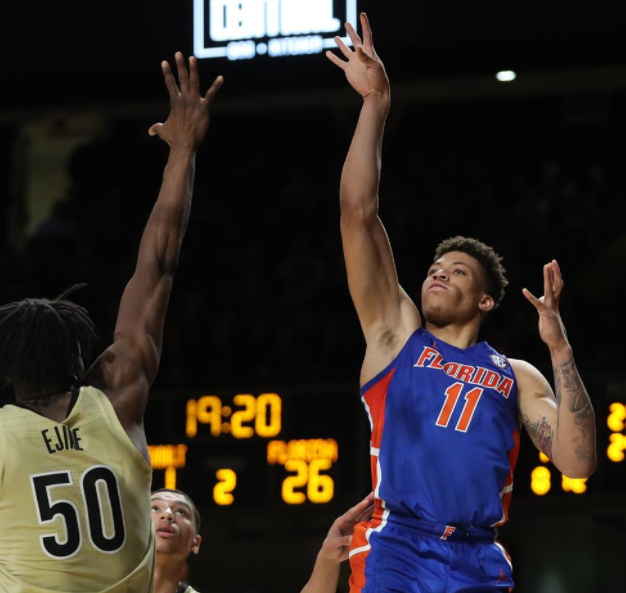 Johnson acknowledged during that conversation his accuser was 'drunk' and 'wildin.'

New details are emerging in the sexual assault investigation of Keyontae Johnson, the University of Florida basketball star formally accused in a police report over an incident with a drunken young woman at a pool party last month.

Johnson, 22, of Norfolk, Virginia, said in a heated phone call with a Gators football player who is romantically involved with the accuser that the woman had initiated consensual sex with Johnson a night earlier, according to a person familiar with the conversation.

The phone call occurred on Feb. 27, after the football player discovered the pair had sex in Johnson’s apartment bedroom during the party. The football player did not attend but arrived later to take her home from the party. The person spoke on condition of anonymity because this person feared harassment from the university and athletic community that could affect social, academic or employment opportunities.

The person said that on the call, the football player — whose identity is not being disclosed to protect the identity of Johnson’s accuser — was furious toward Johnson and said he believed the woman had been assaulted and was not unfaithful. The woman, a 19-year-old former UF student, had told the player she believed Johnson had taken advantage of her.

Johnson’s accuser, in a brief telephone interview Sunday, declined to discuss the phone call and asked to be left alone going forward by the media.

The new disclosures made it likely that Johnson would argue that the accusations were driven by guilt and anger over his accuser’s discovered infidelity, not a consensual hookup during an invitation-only party with one of the school’s star athletes with whom she previously had consensual sex as recently as last summer.

Police said she had rebuffed Johnson’s requests since then to have sex again.

Reached by phone, the football player said in a brief interview that he would not discuss his conversation with Johnson but confirmed that he was cooperating with police. He declined to talk about the case further. The criminal investigation was revealed late Friday in a sworn complaint filed in Alachua County Circuit Court.

The police report did not indicate that detectives ever attempted to interview Johnson themselves about that night.

The preliminary charge cited in court records was sexual battery, a first-degree felony punishable by up to 30 years in prison upon conviction.

Johnson, the SEC preseason player of the year in 2020-2021, has not been arrested or formally charged. He became known nationally after he collapsed during a timeout in a game against Florida State in December 2020 from which his college career never recovered.

Johnson’s career ended earlier this month without him ever practicing or playing with his team since the health scare. The Associated Press reported in November, citing sources it did not identify, that if Johnson were unable to be medically cleared to play professionally, he would be eligible to cash in on a $5 million insurance policy. That policy took effect in July 2020, five months before his collapse on the court. The $5 million could be available to him as a lump sum, AP said.

Johnson’s statements on the call with the football player were consistent with what Johnson said days later on another phone call with his accuser, on March 4, which police had secretly arranged and monitored as part of their investigation.

According to court records, police said Johnson acknowledged during that conversation his accuser was “drunk” and “wildin’,” a slang term for acting unconstrained, when the two had unprotected sex on Feb. 26. He also said he had asked for her consent during the encounter, according to the police sworn complaint. Her response to that on the call was not recorded in the court document.

For example, Kozlowski was the defense lawyer for a university resident hall assistant, Ian Milaski, convicted at trial in November of attempted sexual battery, kidnapping and burglary, in an attack on a student. He also represented former UF football player John Huggins, who was accused of raping an underage teenager in 2019, just as UF dismissed Huggins from the team.

Kozlowski said Johnson was “disappointed and discouraged” about the woman’s accusations. “He will handle it with grace and he will make it through this,” he said.

Kozlowski declined to discuss his legal strategies in Johnson’s case, saying he did not yet have a copy of the police complaint laying out the accusations against his client.

The complaint was only available upon an in-person request at the courthouse, which had closed just before the news about the case broke, and wouldn’t reopen until Monday morning.

Meanwhile, also over the weekend, Johnson’s accuser scrubbed some of her social media accounts to remove at least some photographs. She also shut down a personal website where she had been selling sexually explicit video clips online of herself. The last activity on that website appeared to be about 10 weeks ago, long before the assault allegations.

In her brief comments Sunday in a phone interview, Johnson’s accuser said she was not concerned about information that anyone may learn about her or think of her.

“Look, I don’t care anymore. I’m not worried about the social aspect of any of this,” she said.

Whether the social media posts or explicit videos might reflect on her character with prosecutors, a judge or jurors during a possible trial would legally have no bearing on the central issue in the case: whether the sex that night was consensual or not, or whether Johnson’s accuser was too drunk under Florida law to legally consent to sex.

In other recent sexual assault cases in Gainesville, defense lawyers have sought to discredit victims or prosecution witnesses using photos, texts and other social media posts that could disparage their character.

In the court document against Johnson, police cited two friends of his accuser, both UF students, who described her as “heavily intoxicated” around the time of the pool party and “not making any sense.”

Police said she and her friends attended the party at Johnson’s student apartment complex in Gainesville, in the evening after the pool area was already closed. It came hours after the basketball team’s victory over Georgia in an away game. She had been drinking hours before the party and during the party, and she asked to use the restroom in Johnson’s apartment but does not remember walking to his home, police said. There were no references in the police report to Johnson drinking at the party.

Friends who have been inside Johnson’s third-floor apartment said the bathroom was directly off his bedroom.

Johnson’s accuser remembered lying down in his apartment with him on top of her, and that he asked when she was most recently tested for any sexually transmitted diseases, police said.

Roughly 30 minutes after Johnson and his accuser went to his apartment, her friends at the party texted her worried about her whereabouts. She called one 35 minutes after she left to use the bathroom and said she was walking back to the party, police said.

Moments later, she walked past the party and toward the parking lot, where her friends said she was unable to stand on her own, vomiting in the bushes and not making sense.

Johnson’s accuser told police she woke at 4 a.m. and felt like she had intercourse. She underwent a sexual assault exam and contacted police on Feb. 28.

Police described Johnson and his accuser in the court records as friends and said the woman acknowledged they previously had consensual intercourse as recently as August. Since then, police said, Johnson had asked “multiple times” to have sex again, but his accuser declined and “made it clear to the DEF that she did not want to have sexual intercourse anymore,” the report said.

T.J. Legacy-Cole reporting; produced by Fresh Take Florida, a news service of the University of Florida College of Journalism and Communications. The reporter can be reached at [email protected] or on Twitter at @legacycoleworld.